MANBORG Hits The Big Screen, Brings New Poster With It 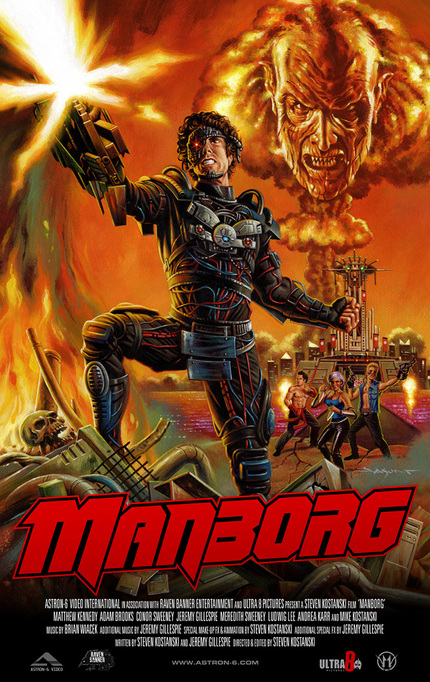 Believe it or not, Steven Kostanski's Manborg is coming to the big screen across Canada and the cult hit has got itself a brand new poster by artist Jason Edmiston to celebrate that fact. A super lofi labor of love by talented VFX artist Kostanski - he has worked on the latest Resident Evil film and Guillermo Del Toro's Pacific Rim since completing his scifi opus - Manborg is a hysterical throwback to the straight to VHS films of the 80s. And, yes, we love this one rather a lot around here. Here are the details:

Gearing up for a fall theatrical release of the cult hit film MANBORG, Raven Banner Entertainment has just commissioned a new poster by the incredibly talented Toronto artist, Jason Edmiston. Edmiston's fondness for pop culture, especially movies and toys, often creep into his work and you can see the amazing results here.

MANBORG is the brainchild of director Steven Kostanski, who is part of the collective of Canadian filmmakers better known as Astron 6 (Father's Day). In MANBORG the armies of Hell have taken over the Earth, and all that stands in the way of the villainous Count Draculon and humanity's total extinction is a motley crew of misfits led by the mighty Manborg: a warrior that's half-man, half machine, but all hero.

Steven Kostanski has teamed up with Raven Banner, TIFF Midnight Madness guru Colin Geddes (Ultra 8 Pictures) and Toronto After Dark's Peter Kupowsky, to release MANBORG & BIO-COP for a Canada-wide theatrical release just in time for the Halloween season, which will see the film play the following cities/dates:

More dates/cities to be announced!