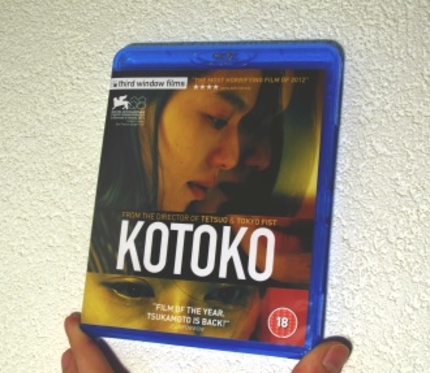 Third Window Films is releasing Shinya Tsukamoto's psychological thriller Kotoko on Blu-ray and DVD this week. I reviewed this title when it played at the International Film Festival Rotterdam earlier this year, so my opinion of the film itself has been copied from that article. Feel free to jump to the part of the review which says "On To The Disc," and you will find the details of this specific release.

So, has Third Window Films done a good job on this release? Well, the short of it is that it is rather meager in extras but the film itself looks marvelous. For more detail, read on!

Kotoko often sees people double. One person she sees is real, while the other is an imagined counterfeit version who sometimes will act in a threatening way, attacking her or her young son. As Kotoko is not able to tell which version is real and which version is imagined, this "double vision" tends to get her into trouble.

But as the stress of taking care of her toddler as a single mother increases, Kotoko's hallucinations worsen and she starts to become a threat to her environment, including her own son. When Child Protection intervenes and takes her boy away from her, Kotoko tries to get her life back in order. But with her condition, should she even be striving to get reunited with her son?

To be honest I wasn't really looking forward to seeing Tsukamoto Shinya's "Kotoko". As a parent with young children at home I have noticed that some subjects have become too painful for me to watch. A few years back I saw Paul Solet's horror film "Grace" and it just about murdered me, as it brought some fears and memories to the forefront which I had difficulties dealing with.
Friends who had seen "Kotoko" were quick to warn me that it would be cutting rather close to the bone, and the IFFR's own webpage about the film basically warned people away from seeing it (strangely enough).

But Tsukamoto Shinya himself was visiting the festival and I wanted to interview him. To be doing that without having watched the film he brought with him seemed unprofessional at best and impolite at worst. So I steeled myself and went to see it...

... and was promptly rewarded with one of the best films this year at the festival. Yes, it's tough on its viewers especially if they happen to be parents. But few films can claim to give such an uncompromising view of what it must be like to be crazy, as seen from the inside. Cronenberg's "Videodrome" comes to mind, or Polanski's "Repulsion". Both of these films are not the easiest to watch, especially when seen for the first time, and "Kotoko" is a lot like that. I would even place Tsukamoto's film squarely in the middle between the two others I just mentioned.

And the affliction Kotoko suffers from is not that far removed from what we encounter ourselves a couple of times each day. The moment some stranger speaks to your kids in a supermarket, no matter how well-intended, alarm bells will go off in your head and you can almost see a scenario where you are supposed to act if those people turn out to be a threat. Only for Kotoko it's not an almost. For her, the alarm scenario is just as real as what happens in front of her, and she cannot distinguish between the two.

Tsukamoto films this horror with a claustrophobic intimacy, but allows colorful moments of beauty and humor to shine through as well. Even though the subject is as heavy as lead the execution sometimes borders on whimsical, allowing Kotoko's imagination to go to some unexpected corners. When some of the truly disturbing images near the end appear, the context thankfully shows they cannot possibly be real except for in Kotoko's diseased brain, which makes things somewhat more bearable for the audience. In contrast, some of the things which are NOT shown actually leave a bigger impact because they (gulp) might be true.

Tsukamoto based the script on conversations he had with popsinger Cocco, who suffers in real life from Kotoko's affliction (albeit thankfully in a much milder version). Cocco herself plays the lead and she is phenomenal, totally disappearing into her role, making us feel for Kotoko even though we increasingly fear her more as the film progresses.

In the end, the sheer amount of empathy this film conjures up for its main character forces you to root for this poor woman to succeed somewhat in her endeavors, even though the rational part of your mind wants to put her into an asylum as quickly as possible.

Tsukamoto has crafted an intelligent and often heartbreaking film about someone whose affliction alters her view on reality in often unbearable ways. His biggest achievement is possibly the fact that "Kotoko" hasn't turned into a gloomy downward spiral of despair.
And somebody give Cocco an award or two. She's deserved it.

To get this out of the way first: my name is on the packaging of this disc as the people over at Third Window Films liked my review so much that they quoted me, name and all. But other than generally liking their output I am not affiliated with TWF.

I'm saying this in advance because I'm going to be very positive about the image quality here, and I do not want suspicious people to think they have "discovered" me as TWF's mole in ScreenAnarchy or something.

The camerawork in Kotoko is shaky on purpose, showing the protagonist's fearful and distraught view at the world. But when things quiet down so does the camera, and in those scenes this disc reveals the stunning sharpness of this transfer. Check a close-up of Cocco smoking a cigarette and you can almost see through the pores in her skin, so ungodly sharp is the image.

Tsukamoto spent a lot of time getting the look, sound and feel for his movie right, so it is good to see the care with which the film is put on Blu-ray. Fans can be very happy with this version.

As for extras, the Blu-ray is not exactly loaded with them. The back packaging mentions a Japanese and UK trailers for Kotoko but I could only find the UK one which you can see below. The only other trailer is for Tetsuo I and II combined (this is a link to it).

Here, he explains his motivations for making the film and his long-running fascination with singer/actress Cocco. There are loads of interesting bits to be learned throughout his musings, for instance when he tells about Cocco's family members popping up in the film in various roles. She has a teenage son who bears an almost uncanny likeness to her and you'll notice him immediately once he's been pointed out in the film.

But Tsukamoto also explains his philosophy behind the film and the themes he wanted to cover, and the interview is recommended viewing,

In fact, that goes for the entire disc. Third Window Films has done the film justice with their release, and it's decently priced as well. If you're a Tsukamoto fan I highly recommend buying this disc.


Kotoko can be ordered on Blu-ray through our affiliate by clicking this link.

Kotoko can also be ordered on DVD through our affiliate by clicking this link.