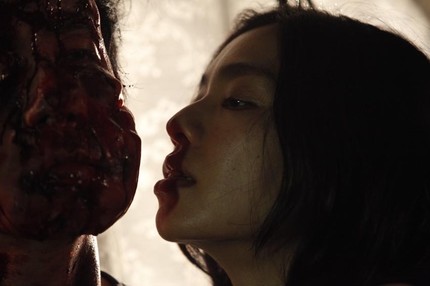 After a successful run on the festival circuit - it was awarded in Venice - the first trailer has arrived for Shinya Tsukamoto's Kotoko, a film created by the cult icon specifically for it's star - pop singer Cocco. But I think it's safe to say this is some glamorous vanity project for the singer. The Toronto International Film Festival described the film this way:

Kotoko (Cocco) holds a fragile grip on reality. A young mother, she fiercely protects her son from what she imagines are constant predatory threats. Even when her infant boy is in her arms, Kotoko envisions death around every corner. As fantasies overwhelm her, she is forced to give up her son and face her manic highs and terrifying bouts of paralysis alone. She cuts herself, hoping to feel her body and jump-start its instinct for survival. The sudden appearance of Tanaka (Tsukamoto), a novelist who has followed Kotoko's deterioration from a distance, offers momentary relief before her instability overwhelms her.

Using voice-over narration and whirling camera work, the film's style mirrors the trajectory of Kotoko's own increasingly fractured perception, which is plagued by confounding apparitions, scenes of horror and surreal nightmares. Tsukamoto's subjective approach is gripping and relentless. Small spaces and claustrophobic compositions leave no room to escape. As Tanaka, Tsukamoto gives a subtle and at times gutting performance. The film's star, Cocco, is an alluring Japanese singer in real life -- the perfect fit for the part of Kotoko, for whom singing is a release from mental anguish. With her haunting melodies and visceral understanding of madness, Cocco fully inhabits this tortured role.

The trailer below begins with footage of Tsukamoto accepting his Venice award but hold on a second and the footage from the film arrives soon enough.