Blu-ray Review: THE AMBASSADOR's Mads Brugger Must Have A Death Wish 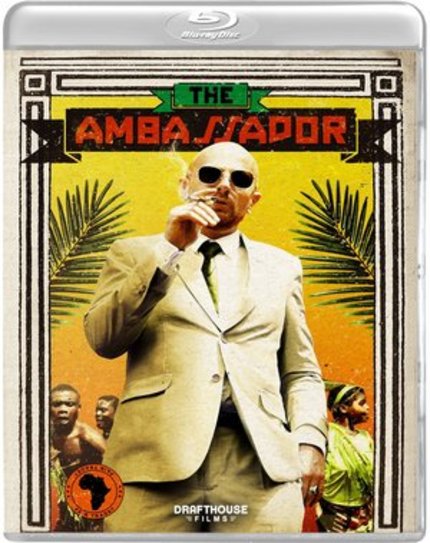 Back in 2010, Danish director Mads Brugger's film The Red Chapel screened at the Dallas International Film Festival. There wasn't anything unusual about the film's appearance here, it wasn't a world premiere or even an American premiere, but it was the first time I was able to see this strange breed of madman on screen. In this film, Brugger heads to North Korea with a pair of disabled ethnic Korean comics on an apparent goodwill tour. What Brugger really wants to know is what the fuck is going on in Korea, and the result is a hilarious docucomedy of manners in which he and his meal tickets get increasingly uncomfortable as they begin to show their hand little by little. It's a miracle he made it out of North Korea at all.

Fast forwarding to 2012, Mads Brugger apparently has had time to grow even bigger balls for his new undercover documentary, The Ambassador. This time he buys diplomatic privilege and attempts to become the Liberian consul to Central African Republic with unpredictably ludicrous results. The film unfolds more or less as a travelogue before switching gears into expose territory, but perhaps it's that calm that makes the storm all the more crazy.

To divulge any of what goes on in the film would be to rob the experience of some of its power, but trust me when I say that truth is stranger than fiction more often than we might like. Brugger's massive set of brass cojones leads him closer and closer to danger with every passing day. He doesn't seem terribly concerned about his own personal safety and seems more irritated than anything else when people attempting to protect him. His position as an actual shady diplomat allows him all kids of access that regular media just couldn't get, as a result he is privy to some incredibly sensitive information and meets with all of the highest levels of government without them so much as flinching.

With the increasing awareness of the illicit trade in blood, or conflict, diamonds, the issue that Brugger seeks to illuminate is very timely. I suppose that since we've now got a Leo DiCaprio films and a Mads Brugger documentary, it can't be long until the trade in diamonds from war torn regions is stomped out entirely, right? Well, even if it isn't, we can be a little bit more clear about how everything goes down thanks to this very entertaining and nail-biting documentary from one of the brightest lights in the gonzo doc community.

I'm going to tell you how it is. I reviewed the Blu-ray disc of The Ambassador from Drafthouse Films. I don't say this very often, but there is really no reason to purchase the Blu-ray edition of this film unless you are a spine # whore like I am. The image quality varies wildly with the different source materials, and none of it is particularly good, if we add to that the fact that largely ambient audio is also really flat, there's no logical reason to make the jump to Blu-ray for this title. The Blu-ray looks fine, but I can't imagine a DVD looking any different for 95% of the scenes.

There is only one extra on the disc and that is a Mads Brugger audio commentary. This commentary is Brugger's first, and you can tell he's not a pro. The conversation gets really spotty toward the end of the film, and it becomes something of a chore to listen to by that point. The earlier sections of the film allow Brugger to give a more distanced perspective on the material, but there's really nothing spectacular to be had. The only other attempted extras are a trailer and a full color booklet filled with promotional photos.

The Ambassador is the diary of a mad man, and as scared as I am for Mads Brugger, I can't wait for him to risk it all again for my entertainment. Highly recommended.