Review: THE AMBASSADOR, More Than a Great Documentary Stunt 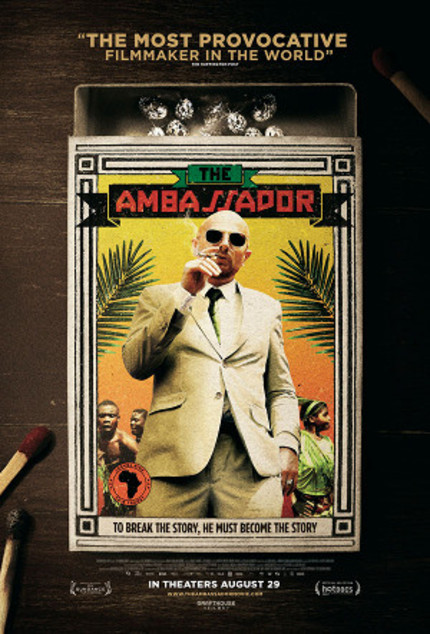 (With Drafthouse Films releasing The Ambassador in New York today and in other selected U.S. cities on Friday, we revisit our review from HotDocs.)

Either Mads Brügger has balls the size of grapefruits or there is mondo chicanery going on in The Ambassador. Well, it's a given that there is trickery happening, so the thing to figure out is who the trick is on: The Central African Republic (a former French colony smack-dab in the middle of the continent), shady European dealers of grey-market diplomatic credentials, helpful local guide-advisers, or us the viewers. The result is a thoroughly captivating, often hilarious bit of guerrilla filmmaking that is subversive both to its subject matter, and its medium of choice.

Lets start at the beginning. Mads Brügger Cortzen is a Danish media personality who is kind of an amalgamation of Michael Moore and the Borat side of Sasha-Baron Cohen. His previous TV documentary/comedies, Danes for Bush and Red Chapel explored the political and social landscapes of the United States during the 2004 election and the social and propaganda mores of North Korea, respectively, both by on-the-ground insertion in a particular form of misdirection of intent. I've not seen either of these films (nor his TV Talk Show, The Eleventh Hour) but I want to see them all based on the brains and brawn exhibited in The Ambassador.

Here, Brügger goes to the Central African Republic to set up a (blood) diamond smuggling operation fronted by building a match factory. He gets his contacts and credentials by spending $30,000 to some rich European brokers who have a side-business in selling diplomatic papers from one African country (here, Liberia) to another (CAR). Then, donning an expensive tan suit, mirror shades and polished burgundy riding boots, the new diplomat-entrepreneur is ready to get some old-school colonial exploitation happening.

Over the course of the film, Brügger, with his 'trusty' adviser Paul (a CAR local), and his beautiful white secretary, dispense many 'envelopes of happiness' to people on the political and business scene in Bangui. He tours parts of the country, visits other diplomats for advice, and eventually works his way up to meetings with the ministers of defense and security, the latter being the son of the president of CAR, François Bozizé. What is crazy about the whole thing is that our consul-in-training is going by his real name, something that anyone in the Central African Republic could have found with a simple Google search in five minutes. Why Brügger is not dead in a ditch somewhere is beyond me. Either that or the joke is on me. It is a joke told with enough chutzpah and style that it perhaps does not even matter. 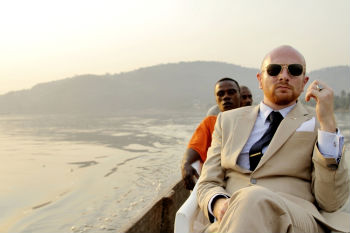 With his extravagant, highly cliché posturing and seemingly open filming of his business/political journey, Brügger sets out to expose the corruption on both sides of the 1st world / 3rd world equation and do so in as highly entertaining a fashion as possible. The quite excellent framing of various hidden cameras in compromising meetings suggest to the skeptical (including me) that manipulation of the film-making is not insignificant here. It is noteworthy that Lars Von Trier's Zentropa company is the chief backer here, too.

But since I do rather like being manipulated (in the right hands such as Mr. von Trier's), I find this particular mash-up of humour, journalism, and ethics-busting cliche-transcending politics to be daring, and in no way whatsoever, trite. Brügger mugs to the camera with a wild sense for marking moments with big speeches; layered with equal parts self-deprecation and self-incrimination subtext. Amusing sideways tangents to the diamond smuggling goal, specifically involving hiring Pygmy workers (for the voodoo-mysticism credibility offered) to make matches for the front-business - one that is not likely to happen - and political kingdom-building in African-diplomat circles offer further trampling on ethics and overall morality in the name of entertainment.

Nothing is more true in our 21st century need for 'reality' and 'content.' Furthermore, the artwork for the proposed matchboxes contains some hilarious images of the current mix of French and Chinese colonialism at play in the CAR. The soundtrack, boasting The Ink Spots, The Mills Brothers, Woody Guthrie, and the original version of Istanbul (not Constantinople) by the Four Lads - appropriately more downbeat and ambiguous than the high-energy cover by They Might Be Giants - add a fair bit of pizzazz and, in no small proportion, ironic distance, to the proceedings.

In the end, The Ambassador feels as much a like a lark as anything else. Unlike the board room impersonation antics of say, The Yes Men, the real danger that the filmmakers are in here is part and parcel of the viewing experience. We see diamonds and 'envelopes of happiness' exchanging hands, but never the promised 'suitcase full of diamonds' crossing out of the continent without any border obstruction.

Brügger may have been swindled (by both the Africans and the Europeans) or simply hit too many dead ends to drive the blood diamond narrative to completion. But the real ultimate goal was achieved, to point out the ease and baldness of white-collar crime accompanying absolute corruption in the wilder parts of African Jungle-Republics.

Humour is often more effective than rage and indignation. You can be the judge.