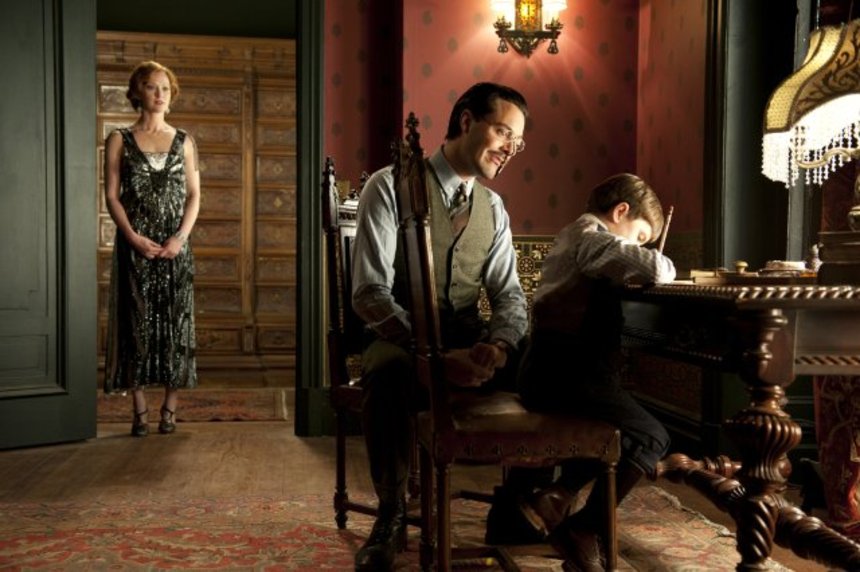 The world has changed for Nucky Thompson, the one-time treasurer of Atlantic City. Forced to take up arms himself against his one time protege Jimmy Darmody at the end of season two and betrayed financially by his own wife, Nucky has finally acknowledged what was seemingly clear to everyone other than himself up until this point. His facade of respectability was never anything more than a facade. Nucky is a gangster through and through and as the world of bootleg liquor becomes more violent Nucky himself will need to respond in kind if he is to survive and thrive. And he is embracing his new role with vigor.

It was apparent from the moment the end credits scrolled at the end of Boardwalk Empire season two that the game had just changed and changed drastically. The show until that point had been a sort of three handed affair, one that balanced the life of bootleg king Thompson (Steve Buscemi) against his protege turned rival Jimmy Darmody (Michael Pitt) and his pursuer Nelson Van Alden (Michael Shannon). But with Darmody dead - killed by Thompson's own hand - and Van Alden disgraced and on the run from the law himself, clearly things were going to be very different in season three. What's surprising is how much they've stayed the same, albeit more violent.

Right from the outset it is clear that Thompson does not intend to put down the gun he picked up in season two. He's carrying heat throughout now, the season beginning with Thompson personally overseeing an execution. He is - somewhat surprisingly - still with his wife, Margaret, but 'chilly' is too kind a word to describe the relationship between them. If there is any genuine affection there at this point it is Thompson's for Margaret's children. The funds Margaret drained from Thompson's would-be land deal have gone to the building of a children's hospital that will clearly provide a major story arc for her character throughout the season while it is also clear that both are maintaining relationships outside the marriage.

What of the other two points of the original triptych?

The world's most dysfunctional family - the Darmody's - continues to live up to that billing. Jimmy's mother Gillian appears to be preserving the legal illusion that Jimmy is still alive, a ruse that has allowed her to remain in the Commodore's house, where she now runs a high class brothel. Darmody's gunman Harrow has stayed on to oversee operations and it is clear that his feelings of loyalty for Jimmy and Angela have transferred to their son, Tommy, whose memories of his natural family are fading fast with a great deal of encouragement from Gillian. Harrow gets the show's most surprising moment and it is clear that he is going to be a major player moving forward, a major fly in the supposed big players' ointment.

As for Van Alden, who I sincerely expected to be written out of the show given his hasty flight when we last saw him? He has settled in Chicago with the nurse originally hired to care for his illegitimate child, the two know living as a married couple under Van Alden's George Mueller pseudonym. He's selling irons as a door to door salesman for the time being but with Van Alden's faith already shattered and disillusionment as to the American Dream setting in fast it is clear that he'll be drawing upon his true skill sets in a different context very soon.

As for the rest - the major players based on real life gangsters such as Al Capone, Arnold Rothstein, Lucky Luciano, etc - they're all present, most in a sort of major gangster role call put together by Thompson to let them know that the rules are changing. He'll no longer do business with just anyone, no, he's going exclusive with Rothstein and the rest can buy their alcohol through Rothstein's network in New York. It means a major power shift and major resentment, and will absolutely fuel the big-picture conflicts throughout the season.

Set on New Years Eve 1923, Resolution is clearly a transition episode. It is designed to carry us from the paradigm shift that ended season two forward into whatever new shape the show is going to take. What's remarkable is that not only does Boardwalk Empire not appear to have missed a beat despite the wholesale changes but that it managed to deliver what is essentially a recap / reminder episode in such a a hugely entertaining way while also setting events promptly into motion in new directions. The season two finale left many wondering if the show could or should continue, those answers are both clearly yes.