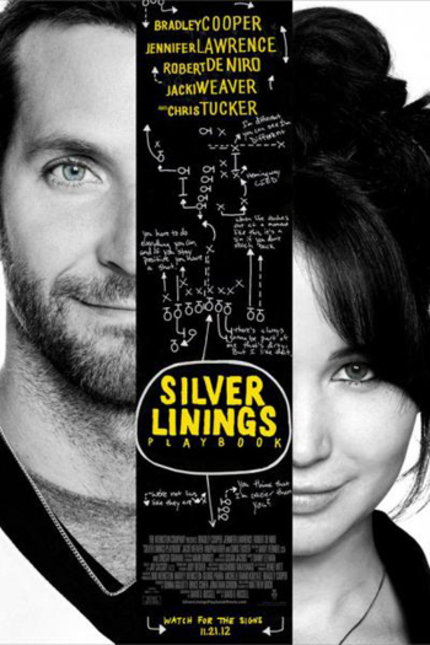 The trailer for David O. Russell's follow up to his Oscar nominated The Fighter, combined with the twee title, makes Silver Linings Playbook to be a horrible film about crazy people in love.

Its a credit both to Russell, a fine ensemble cast and dramatically lowered expectations that film proved to be absolutely terrific when it screened at this year's TIFF.

The story of a man with mental illness coming home to his family in other hands may well have been as trite as it all sounds. Early stories of casting had Mark Wahlberg in the lead role, a fine actor in his own right, but it's clear that Bradley Cooper is the perfect choice for the film. His mix of wry humour and pleasant looks, without the tough guy baggage that Wahlberg brings, is apt for the role of Pat.

Jacki Weaver, the Oscar nominated actress that was so stunning in Animal Kingdom, plays Pat's mom with a far more maternal sensibility, crafting a character with a strong strength and self-imposed obliviousness. Robert DeNiro's performance as Pat Sr. is perhaps his finest turn since Jackie Brown. His balanced performance, playing a father with his own proclivities and challenges.

Naturally Pat's got to find someone as crazy as him to fall for, and he finds that in the guise of Jennifer Lawrence. Forgetting Winter Bone and her Katnissing, this is the role where the audience will fall in love with her. She's grumpy and nihilistic without it ever seeming forced. She looks effortlessly beautiful without being overly plastic, and her chemistry with Cooper is warm and believable.

Structurally, the film unfolds pretty much the way you'd expect it to, but it does so with enormous capability and style. Speed bumps along the way are effective at ameliorating the tone of the piece, preventing it from collapsing into a giant cliché. Dance sequences and football hooliganism make this palpable to both genders of stereotypical middle America, but the film's greatest special effect is that for some reason these elements that by any rights should be completely preposterous are elegantly executed.

I predicted enormous success for the film - it's accessible enough that for those that only see a couple films a year they'll see somethings that's mildly challenging but still cathartic. For those of us slightly more jaded about such things and who see dozens or hundreds of films a year, it'll be a pleasant surprise to see something of this ilk done so well. Treated right, we're talking a smarter and less ridiculous version of Dirty Dancing or Jerry McGuire, with the box office success that may even surpass these hits.

There will no doubt be inevitable backlash from some once the plaudits start rolling in, but seen with open eyes the film is actually quite an accomplishment. Russell handles the shifts in tone extremely effectively, and has sacrificed little of his sardonic edge in crafting something this superficially accessible. With a terrific cast (even Chris Tucker isn't terrible in this film, and that's saying quite a lot!), a story that's touchingly rendered and often quite humorous, expect that come Awards season Silver Linings Playbook will be taking home quite a bit of gold.

Do you feel this content is inappropriate or infringes upon your rights? Click here to report it, or see our DMCA policy.
David O. RussellMatthew QuickBradley CooperJennifer LawrenceRobert De NiroJacki WeaverComedyDramaRomance