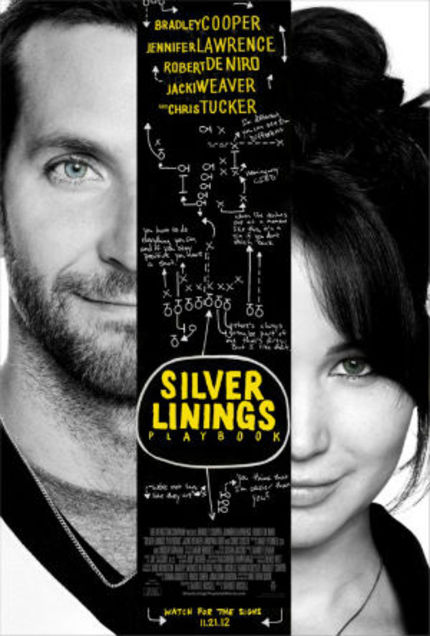 For his follow-up to 2010's The Fighter, which won Academy Awards for supporting actors Christian Bale and Melissa Leo, writer/director David O. Russell has adapted a novel by Matthew Quick into another film that is receiving plaudits for its performances.

Silver Linings Playbook revolves around Pat, a man with Bipolar Disorder who has recently been discharged into the care of his family. Our own Jason Gorber saw the film when it screened at the Toronto International Film Festival and made the following observations about the actors:


it's clear that Bradley Cooper is the perfect choice for the film. His mix of wry humour and pleasant looks ... is apt for the role of Pat.

Forgetting Winter Bone and her Katnissing [in The Hunger Games], this is the role where the audience will fall in love with [Jennifer Lawrence]. She's grumpy and nihilistic without it ever seeming forced. She looks effortlessly beautiful without being overly plastic, and her chemistry with Cooper is warm and believable.

Jacki Weaver, the Oscar nominated actress [who] was so stunning in Animal Kingdom, plays Pat's mom with a far more maternal sensibility, crafting a character with a strong strength and self-imposed obliviousness.

What about the narrative, which follows Pat as he deals with the ramifications of his broken marriage and the possibility of a new romantic relationship?


Structurally, the film unfolds pretty much the way you'd expect it to, but it does so with enormous capability and style. Speed bumps along the way are effective at ameliorating the tone of the piece, preventing it from collapsing into a giant cliché. Dance sequences and football hooliganism make this palpable to both genders of stereotypical middle America, but the film's greatest special effect is that for some reason these elements that by any rights should be completely preposterous are elegantly executed.


Russell handles the shifts in tone extremely effectively, and has sacrificed little of his sardonic edge in crafting something this superficially accessible.

In the process of setting up his characters and story, Russell goes for easy laughs that played extremely well at the advance screening I attended. At the same time, those moments made me feel uneasy; it felt like the film was ready to paint all who suffer from mental disorders with the same broad brush, as "crazy" people who act irrationally and are unable to live "normal" lives.

To a certain degree, that discomfort lingered throughout much of the running time. Ultimately, it's the performances by Lawrence and De Niro that won me over. (I wasn't particularly moved by Cooper, who is overly mannered in the role.) Lawrence is fiery and soft in the right measures at the right moments; without converting her character into an entirely likeable personality, she certainly elicits a great deal of empathy.

For De Niro, it's a matter of finally having a good role that takes advantage of his tremendous range as an actor. His character is more immediately sympathetic than Cooper's, but De Niro is also able to suggest a greater depth of feeling, so that when emotions run high, it feels entirely believable that he might explode.

I have no idea how popular it will prove to be, or what its awards chances might be, but, as Jason noted in his review, "the film is actually quite an accomplishment."

Silver Linings Playbook opens in limited theatrical in the U.S. on Friday, November 16, before expanding into about 400 theaters nationwide on Wednesday, November 21, and then rolling out wider in December.

Do you feel this content is inappropriate or infringes upon your rights? Click here to report it, or see our DMCA policy.
David O. RussellMatthew QuickBradley CooperJennifer LawrenceRobert De NiroJacki WeaverComedyDramaRomance