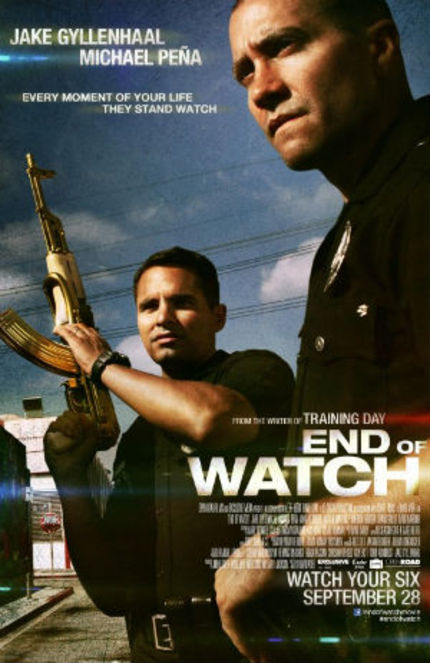 If there's one filmmaker out there who is clearly and passionately interested in the psychology of modern police officers, it'd have to be screenwriter turned director David Ayer. Although his first release was the submarine thriller U-571, all of his films since then -- The Fast and the Furious, Training Day, Dark Blue, S.W.A.T., and Harsh Times -- have focused, to some degree, on the nature of being an enforcer of the law in a world where the law is simply not respected anymore. While The Fast and the Furious and S.W.A.T. are pure popcorn movies, and the other films are decidedly more dramatic / poignant / insightful, it's safe to say that Mr. Ayer has a lot of respect and curiosity where American police officers are concerned.

That respect has never been more clear than it is in Ayer's latest police story, the gritty but realistic End of Watch. While most of the filmmaker's cop tales are knee-deep in police brutality, emotional abuse, and simple immorality, End of Watch wants to focus on the nobler side of the coin. End of Watch has no dirty cops on the take, no back-stabbing colleagues who secretly run drug rings, and no suspect superiors who have a hidden, malicious agenda. If most of David Ayer's movies illustrate how "separate" cops are from the rest of the populace, then End of Watch cleverly proves the opposite: that when you're a good person, a high-stress and violent profession can actually make you even more noble, open-minded, and loyal to your loved ones.

A two-headed character study with a kinetic and frequently violent "action flick" exterior, End of Watch is about nothing more than two young cops who are trying to do a good job, please their superiors, move up the ladder, and go home to a loving family. That's not to say End of Watch is an over-polished piece of "aw, cops are people, too!" silliness; as in all of Ayer's films, there are areas of questionable morality and sudden violence, but here the filmmaker takes great care to present his plainly heroic policemen as decent men.

Brian (Jake Gyllenhaal) and Mike (Michael Pena) may seem like egocentric wise guys at first glance, but as the film goes on we learn that these are two excellent cops, period. Not by-the-book automatons, but truly three-dimensional characters who give the audience a great glimpse into the profession. Through Brian and Mike we feel the excitement, the fear, the confidence, and the innate coolness of being a cop, and while we keep waiting for a certain shoe to drop, End of Watch is not about cops pushed too far, or cops abusing their power for personal gain; it's just about two young Los Angeles cops dealing with a horrifyingly dangerous job.

Presented partially in a first-person "found footage" format seen in lots of indie horror films (Brian is shooting footage for a college course), End of Watch boasts an efficient screenplay that balances simple but effective "plot stuff" with the much more intriguing characterizations of officers Taylor and Zavala. The former is a single guy who dates around in the hopes of settling down (eventually), and the latter is a happily committed family man who sees his partner as an adopted brother. Ayer keeps both plates spinning rather well: the cop stuff is juicily entertaining, even to those who've been raised on a steady diet of Hill Street Blues, NYPD Blue, etc, and the basic "fly on the wall" interplay between Gyllenhaal and Pena is fantastic stuff. Sometimes funny, sometimes intense, and occasionally very touching.

Also vital to the film is a small but colorful performance by Anna Kendrick as Brian's new girlfriend. Along with Pena's effortlessly charming performance, Kendrick adds a sense of humanity to a frequently downbeat narrative.

If Mr. Ayer's goal, after producing a series of "dirty cop" movies, was to craft a film that shows the low-key honor that most police officers possess, then he's done a damn good job of it. End of Watch covers a whole lot of emotional ground for such a "basic" cop story (the plot: our heroes stumble upon a human trafficking ring in South Central), and the result is a suspenseful, intense, and surprisingly touching ode to America's inner-city peacekeepers.

End of Watch premiered tonight at the Toronto International Film Festival. It opens wide in the U.S. and Canada on September 21.

Do you feel this content is inappropriate or infringes upon your rights? Click here to report it, or see our DMCA policy.
David AyerJake GyllenhaalMichael PeñaNatalie MartinezAnna KendrickCrimeDramaThriller

More about End of Watch