Review: RESIDENT EVIL: RETRIBUTION Dares to be Anemic and Shallow 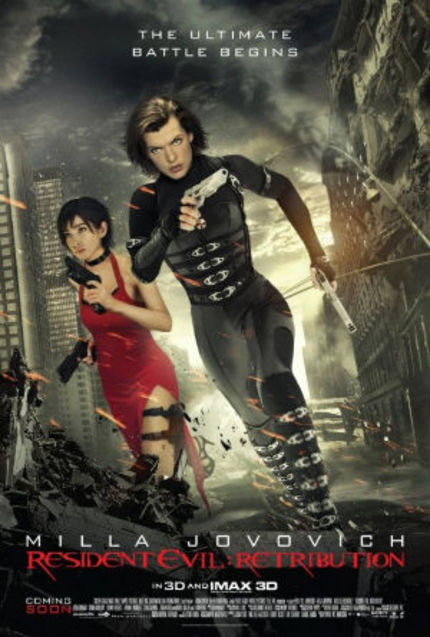 Since Resident Evil: Retribution starts with a slow-motion battle scene shown in reverse, the easy joke to make is something about how the franchise is moving backwards. Usually it's best to avoid the easy jokes, but this film is such a lazy, uncreative, wheel-spinning debacle that to write a clever review of it would almost be inappropriate. If the movie's not going to put forth any effort, why should I?

The fifth entry in the perplexingly profitable video-game-based series, once again written and directed by franchise mastermind and renowned terrible filmmaker Paul W.S. Anderson, has the thinnest story so far. That is perhaps why the 95-minute film starts with a credit sequence, a recap, and a simulation zombie attack -- all totaling 15 minutes -- before the story actually begins.

Truth be told, I was somewhat glad to have Alice (Milla Jovovich) face the camera and deliver a summary of what has happened so far, and not because I had forgotten (though that is also true). Her description of the events, illustrated by clips from the previous films, gives the impression that the previous films were exciting and fun. Knowing that to be untrue, I smile at the craftsmanship involved in making me think otherwise.

Retribution is set in a vast Umbrella Corporation facility in which Alice is being held prisoner, entirely naked except for two dishtowels tied to her front and back. Assisted by company-spy-turned-freedom-fighter Ada Wong (Bingbing Li), Alice acquires weapons and manages to slip into a more suitable outfit of skin-tight black rubber and lycra with a lot of buckles.

Ada and Alice are guided by Albert Wesker (Shawn Roberts), another corporate turncoat, who appears on a computer monitor to tell them what to do -- exactly the way a character in, say, a video game might do. Their mission is to reach a rendezvous point where a team of fellow resistance fighters will meet them.

The one thing Anderson does well is use the camera. Plenty of Retribution is mediocre even in that regard, but there are also moments of surreal, gleaming beauty amid the green screens, backdrops, and CG effects.

One thing he does not do well is write dialogue. (He also apparently lacks the ability to hire actors who can deliver it.) Whether it's Ada filling the role of perpetual exposition machine and explaining everything to Alice, or an ally arriving with a getaway car at the last second and coolly saying, "Waiting for a written invitation?," or somebody saying "The Red Queen knows we're here" immediately after the Red Queen announces that she knows they're there -- whatever the situation, you can bet Anderson has slapped together some inelegant, barely functional sentences to keep us informed.

"Can you get it back online?" asks one of the resistance fighters with regard to Umbrella's computer system. "Not without the access codes!" comes the reply. Yes, it's the classic "can you get it back online?/not without the access codes" exchange, as heard in dozens of other apathetic movies made by people who assume you don't care about the dialogue anyway.

Resident Evil: Retribution is for the hardest-dying diehard fans, the ones who have seen the other four movies and feel obligated to stick with it until it's over. Any unfortunate souls who wander in with no prior RE experience will wonder how something this anemic and shallow was ever popular. You and me both, friends.

Do you feel this content is inappropriate or infringes upon your rights? Click here to report it, or see our DMCA policy.
Paul W.S. AndersonMilla JovovichSienna GuilloryMichelle RodriguezAryana EngineerActionHorrorSci-Fi