Blu-ray Review: BERNIE Was a Good Guy Guilty of a Little Murder 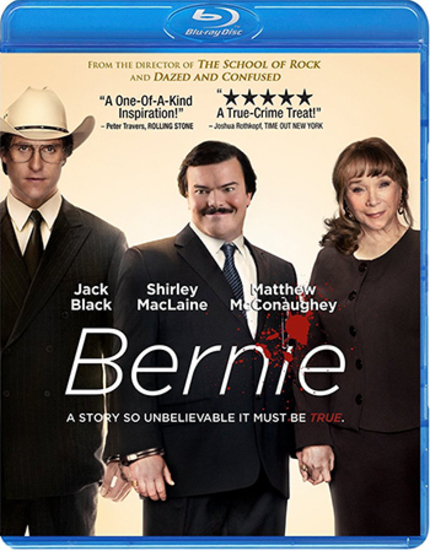 Richard Linklater's Bernie is a unique film to me in that it kind of inverts the trajectory for this kind of sordid, small-town murder plot (and that it happens to be based on true events is all the curiouser).

Bernie Tiede (Jack Black) was a beloved funeral director in the small town of Carthage, TX currently serving a term of life in prison. He took up with the perhaps less well-liked rich widow Marjorie Nugent (Shirley MacLaine). Bernie is sweet-natured, kind, and outgoing while Marjorie is so sour and unpleasant, she hasn't spoken to her own sister and grandchildren in years.

Something attracts Marjorie to Bernie, a heavy-set man with a flamboyant manner (I'm not using that as code for gay, although Bernie's sexuality is the talk of Carthage), and from local gossip we find out that Bernie's always had a soft spot for older ladies (there's a 40 year difference in this May-December relationship). Before long, they're living together and Marjorie is lavishing money on Bernie and then one thing leads to another and Bernie's pumped several bullets into the old lady and stuffed her in a freezer.

Linklater takes us through this strange courtship with the aid of actors portraying locals giving on-camera interviews about what they knew and what they suspected about Bernie and Marjorie (were the two of them in a sexual relationship? Wait, wasn't he gay?), and we find out in the special features that the director actually had trouble getting some of the folks in Carthage who knew Bernie and Marjorie to participate in the film.

Because even with all of the facts of the case, even after Bernie confessed to shooting Marjorie and spent a couple of months after the fact concealing her death and spending her money, the people of Carthage still love Bernie.

And that's really the most fascinating piece of Bernie is how Linklater, MacLaine, and Black paint this curious picture. How can you be a man accused and subsequently convicted of such a terrible crime and still maintain of the love of your hometown? We find out that Bernie was a compulsive spender who would buy any little thing that caught his eye and subsequently give it away to anyone who needed it. Sure, the money wasn't his but his heart was in the right place.

By all accounts, Bernie was a perfect funeral director because he was able to find the best in even the worst person (even a by all accounts cruel and manipulative woman like Marjorie). Maybe the secret to Bernie was that he was all the best parts (or at least, that's all anyone was really able to see in him). If we're to believe his accounts of events, Bernie simply ran out of ways to see the good in Marjorie.

Matthew McConaughey's Danny Buck is the prosecutor with the unenviable task of trying to get a fair trail against a confessed murderer in a small town were everyone believes the accused is a saint. Of course, besides being showy and a little obnoxious (McConaughey is having a great time here playing to the camera as a lawyer who likewise loves playing to the camera), Buck strikes on a legal strategy that will help him get his man.

Linklater, working from a script written by himself and frequent "true crime" writer Skip Hollandsworth compose the story as a dramedy taking place in and around an Errol Morris doc, everything dry and droll, except for those bits where Danny Buck shows up with his wheel of prosecution.

The disc includes deleted scenes and previews as well as three featurettes. "Amazing Grace" is the longest, with Linklater, Jack Black, and Skip Hollandsworth discussing the genesis of the film and their shared fascination with Bernie Tiede who's still beloved in Carthage, while the shorter "True Story to Film" and "The Gossips" cover some of the particulars of the real-life case and casting the talking heads for the film in a town where Tiede is still beloved by many of its residents.

Bernie is available on DVD and Blu-ray now from Millennium Entertainment.