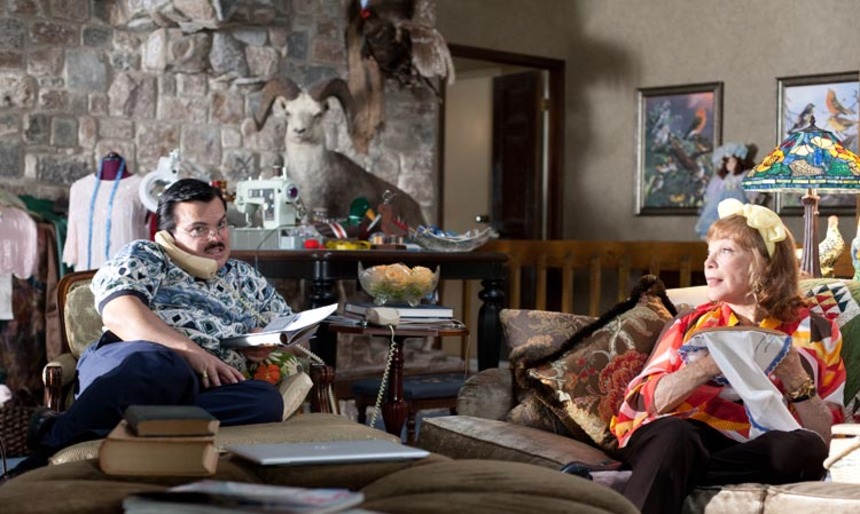 Richard Linklater has long been a figurehead of independent cinema. Classics like Slacker and Waking Life have shunned the typical narrative structure to tell interesting and entertaining stories. In his latest, Bernie, Linklater heads once more down a curious narrative path, splitting his time between traditional storytelling and scripted mockumentary style talking heads. While both provide plenty of laughs, the two films never quite form the cohesion necessary to lift Bernie to the full height of its lofty potential.

The film gets off to a rousing start as the audience is explained the significance of the setting of Carthage, EAST Texas by one of the townsfolk talking heads whose disdain for just about anyone not from Carthage gives the film its biggest laughs. From there we meet Jack Black's titular Bernie, a loafer light assistant funeral director who takes as much pride in his job as he takes pleasure in leading Carthage's musical theater. After a whole lot of heads talking to us about how swell a guy Bernie is, we finally hit a bit of plot focusing on Bernie's relationship with the widowed battle-axe Marjorie played with tight lipped elegance by Shirley MacLaine. Marjorie takes advantage of Bernie's kindly nature, forcing him into a double role of globetrotting travel partner and indentured servant. Suffice to say the sort of problems eventually arise that demand the involvement of not-so-media-shy district attorney Danny Buck Davidson, a role handled with cool ease by Matthew McConaughey. We are left with a quite compelling little courtroom drama to bring us on home.

It's hard not to be impressed by the work of all the actors involved here. Black's slight sashay and soft spoken drawl shoots Bernie up to the very top of the list of his most memorable characters. MacLaine plays the bitch role to perfection, begging the audience to wish her dead. McConaughey was born to play Danny Buck, the DA whose devotion to the law is only bested by his desire for the spotlight. That being said, a lesser actor wouldn't have been able to coax out the nuance that keeps Danny Buck from becoming an outright villain.

But here's the rub: the talking head townsfolk are all great as well. From the slackjawed toothy grin of one of Carthage's porch sitters to the guitar strumming feed store clerk, it's rare that someone says anything that doesn't at least elicit a pleasant chuckle. But because of this continual back and forth, the real drama feels more like dramatization, and the story simply isn't allowed to hit its stride.

There is a whole lot to like in this film - most notably some very memorable performances by everyone involved. Like many great black comedies, it manages a balance between subtle discomfort and over the top laughs. But because of Linklater's narrative choices, we end up with a product that is just a bit too messy to whole heartedly recommend, leaving it pretty daggawn difficult to see Bernie becoming a hit.