Review: ROWDY RATHORE Is Two Tons Of Fun In A Three Ton Sack! 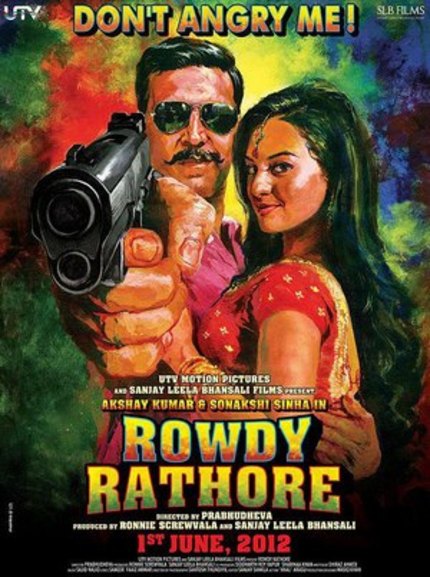 Prabhu Deva's Rowdy Rathore is 90 minutes of fast-paced fantastic action, music, and comedy. Unfortunately, the film is 139 minutes long, you do the math. Indian popular cinema plays by its own rules, and I've learned to respect, honor, and appreciate what it has to offer, but sometimes I just have to call bullshit. Rowdy Rathore wastes nearly an hour setting up plot points that should have taken no more than fifteen minutes, and the film suffers for it.

Typically, this second paragraph is where I'd stick a brief synopsis of the film, but this film is so convoluted that I really don't think it would make any difference. Just to be clear, a convoluted plot is not necessarily a bad thing. Plenty of Indian films wind a ridiculous number of characters and plot points into their stories and I love them just fine, but in this case, the film began with an hour of fluff that would take several paragraphs to explain. Suffice it to say that Akshay Kumar, in a double role as con-man Shiva and supercop Vikram Rathore, fights to save a village from a tyrannical landlord/protect his daughter/win the love of a good woman for the last hour and a half of the movie, and most of that stuff is glorious.

Credit where it is due, the action sequences, as teased in the trailer, are fantastic and a lot of fun. Action choreographer Anal Arasu deserves a lot of attention for his quality work here. The hand to hand combat is really impressive, with Kumar trying out a few new moves on the baddies and doing so with style. Prabhu Deva has an eye for choreography, whether it is for fights or dances, and there's no doubting that these two elements are the highlights of Rowdy Rathore, even if a couple of the songs fall a little flat and he takes way too long to get to the fighting.

Prabhu Deva's track record is pretty impressive track record as a director, and his last Hindi film, Salman Khan's Wanted (incidentally, a remake of Deva's earlier Tamil film Pokkiri and so on and so on down the rabbit hole) set a new standard for bringing new tech and stylistic flourishes to Bollywood masala films that has influenced every new action film since 2009. What I was expecting going into Rowdy Rathore was another master class in style. Akshay Kumar isn't so much an actor as an overly tall honey-baked ham, but given the right direction and a little bit of a nudge he's an action juggernaut. Unfortunately in this case, he's given far too much time to ham it up on screen, which leaves the audience to get impatient for the fighting. After all, the film is called ROWDY Rathore, but things don't really get rowdy until the last ten minutes before the intermission.

The film wasn't a complete disappointment, I've come across a few of those in the last couple of years, it was just really flabby. Several of the songs are really fantastic and feature some incredible choreography, however, they've shoehorned far too many "friendly appearances" into the item numbers, and it just feels like a series of awkward cameos. How many people in a Bollywood audience are going to get excited to see Tamil film star Vijay appear in a song? Probably not many. However, the majesty of Aa Re Pritam Pyare made up for a lot of sins, if only for the fact that I finally got to see Mumaith Khan do her thing on the big screen.

Alas, this is not the film to check out if you're interested in Bollywood cinema but have never taken the plunge. There are too many remnants of the story's south Indian origins that may leave a casual viewer shaking their head in confusion. The over the top acting and action are de rigueur in Telugu masala movies today, but only really appear in south-style Bollywood action these days. A lot of the overacting misses the mark, and the only really strong stuff comes from Akshay Kumar and his ridiculously villainous rivals. Sadly, Sonakshi Sinha is really stiff in her role as Kumar's leading lady, and Akshay's fellow police officers have zero charisma, leaving him to do all the heavy lifting.

Even at two hours and nineteen minutes, the film doesn't struggle toward the ending, which almost makes it even more frustrating. The back half of this film is incredibly strong, it's just getting there that's the problem. If you liked the trailer, and you'd have to be blind and deaf not to have been interested, you can probably safely still check out Rowdy Rathore, just don't hurt yourself getting there on time, wandering in about forty five minutes late might not be the worst thing you ever did.

Do you feel this content is inappropriate or infringes upon your rights? Click here to report it, or see our DMCA policy.
PrabhudhevaShiraz AhmedAkshay KumarSonakshi SinhaNassarParesh GanatraAction