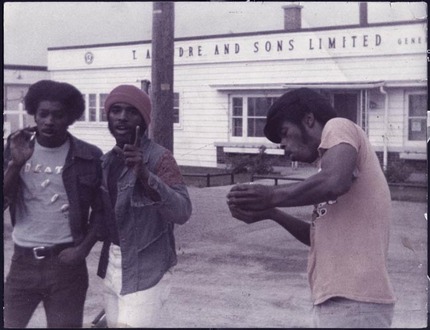 A BAND CALLED DEATH is the story of an all-black proto-punk band from Detroit who waited over thirty years to get their due. Active in the early 70s, Death--teenage brothers David, Dannis, and Bobby Hackney--were largely ignored and their only single lost--until indie powerhouse Drag City discovered them thanks to some persistent record collectors, reissued their album and reintroduced the first black punk band to the world.

Directed by Jeff Howlett and Mark Covino, A Band Called Death explores the fascinating history of a band too wild to be appreciated in their own time. Record executives and radio DJs hated the name--David's refusal to change it cost Death a record deal. They couldn't get shows without a record out, and clubs didn't want to book a black group playing hard-driving rock & roll. Death even had their show flyers torn down by the police out of concern that the Hackneys were trying to start a gang. But somehow, David knew that one day, the world would come looking for Death's master tapes--and he was right.

After two sold out screenings at LAFF, A Band Called Death will have a final encore screening this Saturday, June 23, at 9:20 p.m.

ScreenAnarchy: How did you first discover Death? What about their music or their story inspired you to make a film about them?

Jeff Howlett: I met Bobby Sr. and Dannis twenty years ago at a local music festival that my band and their band, Lambsbread, were playing. One day Bobby Jr., who through his father was a successful musician in his own right, formed a band with his brothers to honor his father's band Death. Bobby Jr. told me to come check out his band, Rough Francis, who were playing a gig in town. He told me about how his father was in this amazing punk rock band back in the 1970s, and I said, "What? Your father never told me about this." When I went to the show, I was absolutely mesmerized by the music, especially knowing the family for twenty years. I did not know about this hidden historical gem. One of our friends said it best: "We need to rewrite the history of punk rock." A few months later, I called Bobby Jr. and Sr. and we started production on what would become A Band Called Death.

Mark Convino: I met Jeff on an AC job I was doing for a music video that he was directing. We hit it off immediately and worked on a few small projects together. Then one day he mentioned how he wanted to make this documentary on his friend's band called Death. I was trying to wrap up my own feature documentary at the time, so needless to say, I was a little reluctant at first. That was until Jeff sent me an email with the NY Times piece and a link to the two tracks from the 7". Once I heard "Politicians in my Eyes" I immediately called him back to start production and the rest is history.

What's your history as filmmakers? Are you musicians yourselves?

Covino: A New York native, I fell in love with cinema at an early age. While in high school, I was a student at Eastern Suffolk B.O.C.E.S., where I began honing the skills needed to make the leap from high school student to filmmaker. Soon after, I moved to Vermont to attend college, earning a BA in Cinema Studies and Film production in 2006.

While I was working towards my undergraduate degree, I became heavily active in the VT filmmaking community, working on productions such as Unless a Death Occurs: Hazing Examined for PBS, Rally-Nation (a pilot optioned for ESPN 2), as well as the highly acclaimed Black Panther documentary What We Want, What We Believe.

Howlett: I started making music in Vermont in early 1993 with the band Five Seconds Expired and later started Non Compos in 1998 as a lead vocalist and songwriter. Both bands experienced local and national recognition, including international press in Modern Drummer, Metal Maniacs and College Music Journal.

Throughout my musical career my interest in photography and video production gained momentum while I attended film school in Burlington, VT in the fall of 2007. One year later I met fellow filmmaker Mark Covino during a local music video production, and in early 2009 I coerced him into partnering up with me on the production on what would later be titled A Band Called Death.

What was it like to step into that tiny little room in the house where Death formed and practiced? What was in there? Had it changed at all over the years?

Howlett: It was really amazing stepping into the room. It was like stepping into a time capsule as Bobby Sr. told us inspiring stories about how he and his brothers created history. The room changed over the years--it's now a guest room with a bed and TV and various memorabilia that is actually shown in the film as Bobby tells the stories of the rooms history.

How was David always so confident that one day the world was waiting for Death and would come looking for those master tapes? Why didn't Bobby and Dannis share his confidence?

Howlett: David told his brother Dannis that one day the world would come looking for this music and gave Bobby Sr. the masters to hold onto. Bobby and Dannis, at the time, did not share his confidence simply because they had tried and felt the rejection of Death for so many years that they had lost that sense of hope.

Covino: I think David was a strong believer in fate, and deep down inside, he knew that Death was meant to succeed in one way or another. Nothing ever convinced him otherwise. He was very passionate about his music, something I think any artist can relate to.

Some of the most touching scenes in the film involve old photos and clips of the Hackney brothers playing and hanging out together. The audio of David's voice is also quite powerful. Can you tell me about the process of recovering that footage? What was it like to go through it with Bobby and Dannis?

Covino: It was incredibly emotional. I spent weeks, if not months, scanning hundreds of photos between VT, OH and Detroit family members. Bobby Sr. had over a dozen or so boxes stacked over the rim with books of photos, kept up in the same attic as the master tapes. Every time I scanned through them I would interview Bobby Sr. (or whomever was supplying the pictures) and dig deeper into the family history. It brought back many memories for all, both happy and sad. I think the hardest part for Bobby Sr. was revisiting the years that David was drinking.

The audio tapes of David came from both Bobby Sr. and their oldest brother Earl. I remember when I had Earl play me a tape of David talking, that was a pretty emotional moment. Earl went from being loud and jovial, to quiet and melancholy. That's one of those times that even though you're having this emotional reaction inside of yourself watching this, as a documentary filmmaker, you have to just allow the camera to capture the moment and keep filming because sometimes those moments become the most poignant and important parts of the story you're telling.

Covino: When we finally found Dannis' wedding footage--footage that Dannis thought was not important--I thought it was pivotal to telling the story and ultimately one of the only pieces of video footage we would ever uncover of David.

Death had a lot against them. Everyone hated their morbid band name. There was a lot of resistance to the idea of black guys playing punk (or "hard-driving rock & roll," as the Hackneys considered it at the time). Detroit in the 70s was in a serious recession. Clubs didn't understand them and wouldn't give them shows without a record out. Heavy corporate control over the media meant they didn't get much airplay. What do you think the biggest reason why Death never made it during the 70s?

Covino: We spoke with Wayne Kramer of the MC5 about this and he said if only they had played the Ballroom, audiences in Detroit would have completely embraced them. So I honestly think that it was almost a wrong place at the wrong time scenario, unfortunately.

The film goes over all the various reasons why Death never made it during the 70s, but doesn't really cover the disco tsunami and its role in blocking Death from getting airplay. Was that a conscious decision? Or was it just one of many, many factors against the band and there wasn't enough time to cover it all?

Covino: We definitely covered that a lot during the interviews, however, due to the timing of telling their story in a feature length film, we had to cut some things out that would have just added onto the many factors against the band. We felt that the personal struggle they were feeling inside of themselves and the course that it led them on to try different types of music that the Hackney brothers felt the world did want to hear from them was more powerful than making a statement about corporate America during that time.

What was it like seeing Death reformed and playing live after the Drag City re-release came out?

Covino: It was pretty intense. I really liked the band up to that point, but after that first live show I fucking LOVED them. They're one of my favorite bands now.

Howlett: I loved seeing the band performing live. After knowing them for twenty years, to play the kind of music Death plays completely puts a smile on my face, especially because I was a kid of the hardcore/punk scene of the 80s.

The interviews in the film are really fantastic--you've got everyone from Henry Rollins to Elijah Wood to Questlove speaking on the remarkable story of Death. Do you think the world fully appreciates Death now?

Howlett: Let's hope so. We are very appreciative and honored by your confidence.

What's the most important lesson we can learn from the story of Death?

Covino: Never give up, stay true to yourself, and in the words of David Hackney, "Back up your brother."

Howlett: Bobby said it eloquently at the end of the picture: "For what shall it profit a man, if he shall gain the whole world, and lose his own soul? And David's music was his soul."

What's next for the band? And for you?

Covino: Death is currently recording their new album back home in VT. I look forward to wrapping up my other feature length documentary, also a music doc, and I'm currently fleshing out a few narrative short/feature length films that are in preproduction. Another doc may not be too far away.

Howlett: I am weighing in on several projects to produce that are still in the early stages of development.

A Band Called Death will have a final encore screening at LA Film Fest this Saturday, June 23, at 9:20 p.m.