Dolph Lundgren Versus A Dragon 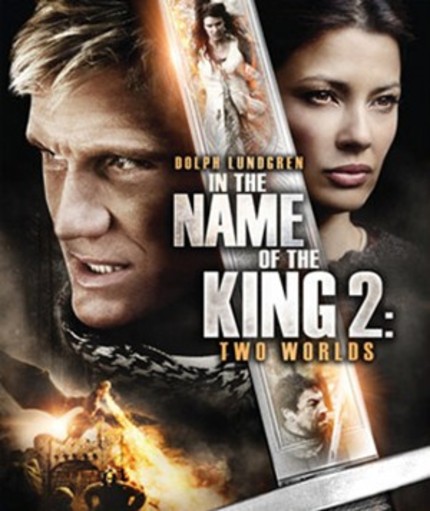 Well, okay, Dolph doesn't actually fight the dragon but the headline sounds much better as is than "Dolph Lundgren turns and runs from a dragon like a little girl" would.

What are you getting here? It's two clips from Uwe Boll's In The Name Of The King 2 and, well, that should tell you all you really need to know.

A tale of knights and kings, great courage and noble causes, magic and adventure.
The sequel to IN THE NAME OF THE KING.

A cloaked female wizard runs through a forest, being chased by assassins who are dressed in medieval clothing and who wear dark war face paint. She manages to expertly kill them all with her fighting knives and explosive alchemy. We follow her as she desperately makes her way through the woods, which are part of a large, modern-day park. A city sits in the background. This is Vancouver of today. The wizard, Elianna the Powerful, has come to our world to save the life of one man.

In this, the second world of In The Name of The King: Two Worlds. Our hero, Granger, is a modern, ex-military operative who finds himself thrust into a war that has crossed the fabric of time. Pulled back into Elianna's medieval era by her ancient magic, Granger discovers the first world's denizens revere him as the prophetic saviour of their world - the one who will lead them into salvation and save them from a deadly civil war that threatens their existence...

"Well, okay, Dolph doesn't actually fight the dragon but the headline sounds much better as is than "Dolph Lundgren turns and runs from a dragon like a little girl" would."

What the hell are you writing...Mrs Brown..Lundgren LEAPS like a nordic giant cause he.... ehhhh..hahahhah...kidding....yeah...but then again....I would be running like a girl after seeing this badly made CGI dragon.....well...its Uwe Boll....accept no substitute!

Please stop covering IN THE NAMAE OF THE KING 2 when
1/ it's been released since December in the States
2/ DL has so much more interesting projects and roles on his plate (SMALL APARTMENTS, STASH HOUSE among others)
3/ here's what he just told Empire (http://www.empireonline.com/news/story.asp?NID=33920)

Dolph was asked by Empire about ITNOTK2 so here you have it loud and clear:
“Why did you make this film?” we asked Dolph recently.

“What can I say? It was an experience,” he went on. “It wasn’t exactly my taste, but I did it for other reasons. I was getting divorced at the time and I needed some cash quickly to pay for a few things… lawyers. Uwe is actually very impressive though. He has his own business and he runs everything the way he wants to do it, up there in Vancouver. He makes his own movies, gets his own financing. I wish I could do that. I wouldn’t have to work for anybody else!”

So, we wondered, did downtime on the Expendables 2 set ever see Dolph and The Stath comparing notes? And how did Dolph feel about playing Statham’s son?

“Am I his son?!” This was apparently news. “God, I hope not. I didn’t see the first one. Well, I saw part of it… I don’t know who I play. I think I’m just another guy who has the same sort of adventure. I don’t know what happened to Jason. Did he go back in time too? [He didn’t.] We never talked about it, never mentioned it. Wow, you learn things all the time…”