Contest: Win A Copy of IN THE NAME OF THE KING 2: TWO WORLDS on Blu-Ray [Update] 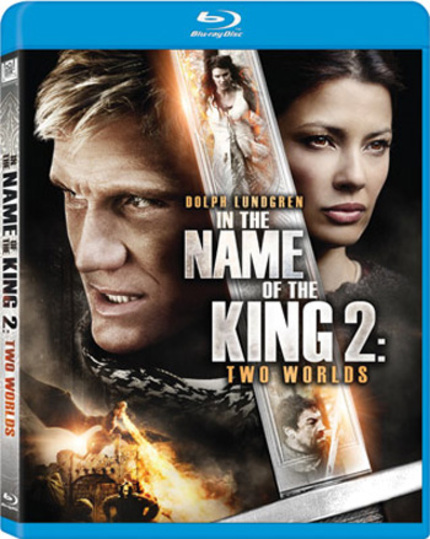 [Update: ...and we have our winners. As always, thanks so much for reading and entering these things--we love giving you all free stuff.]

Of course it has a time-traveling Dolph Lundgren in it. And it somehow manages to call out a second videogame franchise from the first film with Two Worlds (the first was an adaptation of the Dungeon Siege series. Anyway, we have two Blu-ray copies of Dr. Uwe Boll's latest up for grabs, with one of our usual, very simple contests. Here's the official synopsis for the movie:

Dolph Lundgren (The Expendables, Masters of the Universe) stars as Granger, a lethal, ex-Special Forces soldier who finds himself transported back to a mystical age of sorcery, dragons and savage hand-to-hand combat. This modern-day warrior has been summoned to defeat the forces of darkness and fulfill an ancient prophecy. But as he fights his way to the truth, Granger learns no one can be trusted -- and one wrong move could cost him not only his life, but the future of his world.

Before providing you with details, the movie's U.S. home release distributor, Twentieth Century Fox, asked us to run their retrospective piece on the works of the notorious director. All text below is the responsibility of Fox and any opinions don't necessarily reflect those of ScreenAnarchy or its contributors.

Although often cited as one of the worst directors of his time, and a certainly polarizing character, director Uwe Boll never shy's away from his critics. He clearly has many opinions and talents, and in this insightful feature we'll take a look at some of the films in his controversial career in order to introduce him to a new league of potential fans.

From horror-mastermind Uwe Boll (House of the Dead, Bloodrayne) comes the adrenaline-fueled next chapter in the epic action/adventure franchise, IN THE NAME OF THE KING 2: TWO WORLDS. Dolph Lundgren (The Expendables, Masters of the Universe) stars as Granger, a lethal, ex-Special Forces soldier who finds himself transported back to a mystical age of sorcery, dragons and savage hand-to-hand combat. This modern-day warrior has been summoned to defeat the forces of darkness and fulfill an ancient prophecy. But as he fights his way to the truth, Granger learns no one can be trusted -- and one wrong move could cost him not only his life, but the future of his world.

One of Uwe Boll's first major English-language releases, Blackwoods came out in 2002 and stars Patrick Muldoon and Clint Howard. This direct to video release is the tale of a young man who is haunted by a tragic accident he caused years before. On vacation with his girlfriend, he falls prey to a deranged family, and must fight for his life in the Blackwoods. Boll wrote and directed this film, and it currently holds an 11% "rotten" rating on Rotten Tomatoes, making it his "best" movie.

House of the Dead

Panned by critics worldwide, 2003's House of the Dead is an adaptation of an arcade game of the same name (and Boll's first of many video game adaptations). Consistently ranked among the all time worst video game movies, House of the Dead is about a group of young adults who travel to an island for a rave. Upon reaching the island, they find that it is infested with zombies and that most everyone has been killed. Over the course of the film, most of the group is either killed by zombies, or sacrifices themselves to save the others. In the end, only two survive.

Boll's third video game adaptation, 2005's BloodRayne, was met with distaste from critics, fans, and even Michael Madsen, one of the stars of the film! The plot focuses on Rayne, a half human/half vampire (called a Dhampir), who wants to avenge her mother's rape by her father, Kagan, king of the vampires. Two vampire hunters from the Brimstone Society (who work to defeat vampires) persuade her to join their cause. Boll produced and directed BloodRayne, which was nominated for six Golden Raspberry Awards and, sadly, won none of them.

2007's Seed was written and directed by Uwe Boll and released in Canada. Seed is the story of a psychopathic killer named Seed who likes to film the torture of his victims. Seed somehow manages to survive both his execution by electric chair and being buried alive, and goes on a killing rampage, targeting everyone who was involved with his death sentence. Boll used animal abuse and torture footage from PETA in the opening credits, and donated 2.5% of his profits from the film to the organization.

This is a fairly short and sweet one: just e-mail me with IN THE NAME OF THE KING 2 in the subject line and put your mailing address in the body of the e-mail by Wednesday, December 21st at 11:59 PM PST.

In the Name of the King 2 hits DVD and Blu-ray December 27th.