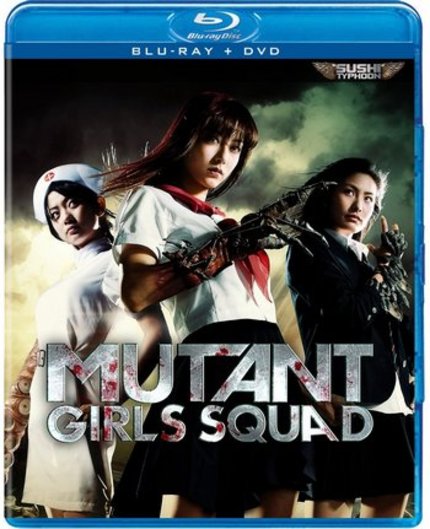 2010 seems like a lifetime away in the Sushi Typhoon universe. Mutant Girls Squad was initially finished nearly two years ago and had its premiere screening in Japan two years ago to the day before it's Blu-ray debut on US home video from Well Go USA. Part of the reason for the delay is the transition from FUNimation to Well Go of the Sushi Typhoon license, which happened almost exactly when this film should have hit store shelves. In the meantime, several more recent films have already been released to varying degrees of success, but if you've begun to suffer from Sushi Typhoon fatigue, I think this might be the time to give them another shot.

Mutant Girls Squad is the story of a young girl whose body changes in adolescence beyond what most of us would consider normal. While she's busy growing Freddy Krueger hands, and developing acrobatic martial arts skills, a special task force is sent to her house to dispose of her mutant father, and her co-conspirator mother. This random violence leads Rin (Yumi Sugimoto) down a path of vengeance, on which she's led by a revolutionary set of secret mutants led by a cross-dressed Tak Sakaguchi and fellow Mutant Girls, Yoshie (Suzuka Morita) and Rei (Yuko Takayama). Rin eventually discovers that their mission goes beyond revenge to complete domination over the human race, and fights back against her former general, in a massively kinetic final half hour that blows the roof off of the mother.

At first, the film doesn't sound too far from the usual Sushi Typhoon fare, but the key is in the execution. Mutant Girls Squad's secret weapon is that it is actually a triptych directed by three of Sushi Typhoon's big names, who each get a turn at turning your stomach. Tak Sakaguchi's section, the first half hour, is a thirty minute action sequence. While he gets burdened with the origin story, he makes the most of it and blasts through his part of the story with vigor. The second section is directed by Sushi Typhoon's resident pervert, Noboru Iguchi, who takes the opportunity to crank up the weirdness factor. Tentacle arms are shoved up asses, the various members of the mutant army are introduced, with chainsaw buttholes and katana boobs aplenty, and silliness abounds. This is Iguchi's wheelhouse, and he delivers, setting up the mutant identities and powers with aplomb. The finale is directed by Sushi Typhoon's most hyperactive filmmaker, Yoshihiro Nishimura, and his last thirty minutes of the film is loud and fast, the camera darts and dodges all over the place, and the action turns from goofy to hard-hitting, in a way that is identifiably his.

Mutant Girls Squad's greatest strength is that is plays to its filmmakers' greatest strengths. Anyone who has watched a lot of Sushi Typhoon films, and I think I've seen just about all of them, knows that there are times when the frantic nature of their films can become like a jackhammer to the brain. The idea that you can give a filmmaker a couple hundred thousand dollars and let them do whatever they want may be creatively freeing, but editorially it can be a nightmare. Case in point is Nishimura's two-hour long Helldriver, a film that I liked, but with which I had serious issues concerning the run time. That being said, I've grown accustomed enough to the filmmakers' individual styles that it's fun to watch a film like MGS and be able to pick out, just from watching, which director had which section. It may sound crazy, but these guys fit neatly into the auteur mold, though I doubt we'll be lining them up for Cahiers du cinema anytime soon.

The relatively condensed ninety minute running time is a blessing, and one that forces each director to focus they talent, rather than expand upon it. This works remarkably well, as each segment feels unique, and for those who have gleaned enough about their styles, it is fun to see what they do when given limitations, rather than free rein. This makes Mutant Girls Squad a top tier Sushi Typhoon film for me. It doesn't skimp on any of the ingredients that make up this very specific subgenre, but it distills it down into a nut-punch, rather than an overlong migraine. Definitely worth checking out if you're a fan. If you don't like Sushi Typhoon in general, though, I doubt anything here will change your mind.

Mutant Girls Squad, shot on digital, looks and sounds great. It's tough to fault pure digital presentations, it looks exactly as it was meant to. There may not be a whole love of depth, and the shadow detail may be lacking, but that's a limitation of the technology, rather than the transfer. If you're going to watch this film, the Blu-ray is the only way to go.

As usual, Sushi Typhoon and Well Go don't skimp on the extras. All of the bonus material is edited in the style of a Japanese game show/commercial, so it is extra exciting. We get about half an hour of Opening Night footage, featuring intros and Q & A's with the directors and stars at various premiere events in Japan. We also get a little more than a half an hour of interviews with cast and crew that are a bit dry, but interesting. The final bit of documentary video we get is a half hour long making of featurette, which is fun to watch and features even more behind the scenes footage and interviews with crew and lead and supporting cast, many of whom are Sushi Typhoon regulars. It looks like a crazy fun set to be on, and hopefully I'll get to check one out someday.

Lastly, Well Go has been very good about acquiring additional short films that extend the story of their Sushi Typhoon titles, and Yoshie Zero is an origin story for both the Yoshie character, and Tak Sakaguchi's Kisaragi. It is obviously an extremely low budget operation, presumably shot in an afternoon, but fun nonetheless. The give us a lot of bang for the buck, you've gotta give them that.

Well Go USA's Blu-ray/DVD combo of Mutant Girls Squad is a fun one. It certainly benefits from the short running time and the multiple directors on the project. I'd definitely be interested in more of these types of films, the discipline seems to have done the team some good.