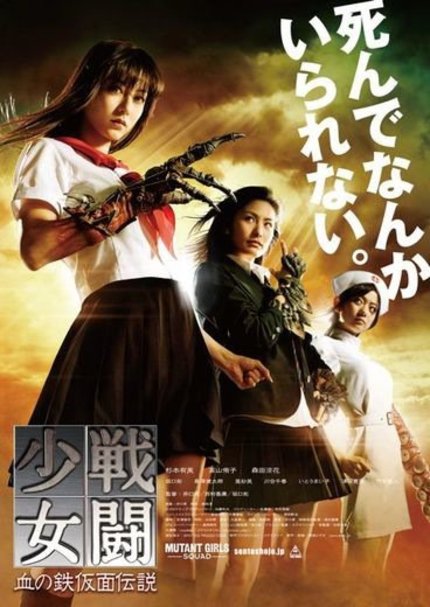 Rin (Yumi Sugimoto) is a normal high school girl in Japan. She wears a sailor outfit, very pretty, has loving parents and is turning sixteen. Her life at school may be a little miserable because of mean bullies, but little does she know that it is just going to get worse, or better, depending on how you look at it.

Upon her arrival at home, Rin finds out that she is a descendant of the ancient Hiruko clan that is gifted with superpowers. Not long after this new discovery, a group of anti-mutant government super soldiers come swarming in and butcher Rin's parents.

Directors Tak Sakaguchi (BE A MAN! SAMURAI SCHOOL), Yoshihiro Nishimura (TOKYO GORE POLICE) and Noburo Iguchi (ROBOGEISHA) have concocted a movie that is familiar to those who know their past works. This does not mean that MUTANT GIRLS SQUAD is boring - far from it. While the tone of the movie is not as wacky as VAMPIRE GIRL VS. FRANKENSTEIN GIRL, MUTANT GIRLS SQUAD is still very funny. It feels almost like a revisiting of TOKYO GORE POLICE's premise, with a more humorous twist.

The mutant premise is familiar. There are a bunch of super powered heroes out there. The fact that the superpowers are so hideous and at times even unfathomable is something else. The mutations amongst the Hirukos can be downright scary. They are reminiscent of something out of a Cronenberg movie, but at the same time not a new addition to the overall aesthetic to a Nishimura movie. Did anyone ever notice that Nishimura also has like the same song play in every single movie? The song that goes on when the girls fight, I swear I heard it in MACHINE GIRL, TOKYO GORE POLICE, and this movie.

MUTANT GIRLS SQUAD is plenty funny and plenty familiar. There are moments in the film that will stay with me for a long time. Personally, I still cannot get over Sakaguchi as Sakaragi who is basically a crazed, psychotic version of Michael Jackson, trying to get his belly-sword hard. Unfortunately for him, this is only possible by summoning ancient demonic powers and blood sacrifice.  In its entirety, the film is not exactly that different from its predecessors.

There are two different kinds of people who will see this movie: those who know what they're getting themselves into and those who do not. The film features ridiculous, completely over the top and borderline offensive content that may not be for everybody. There is a lot of blood spilled in the movie... a lot. There are also a plethora of sexual innuendos and sexual jokes that may come across kind of imbecile, but hilarious nonetheless. While certain people such as myself find this extremely entertaining, some people don't - usually the kind of people who have no sense of humor, or decent, less broken in the head people.

Those coming into the movie with a prior knowledge of what to expect of it will get exactly what they were looking for. At times MUTANTS GIRL SQUAD may feel a little too familiar, but fortunately there are enough unique comedic elements scattered throughout the film that make it still totally enjoyable.