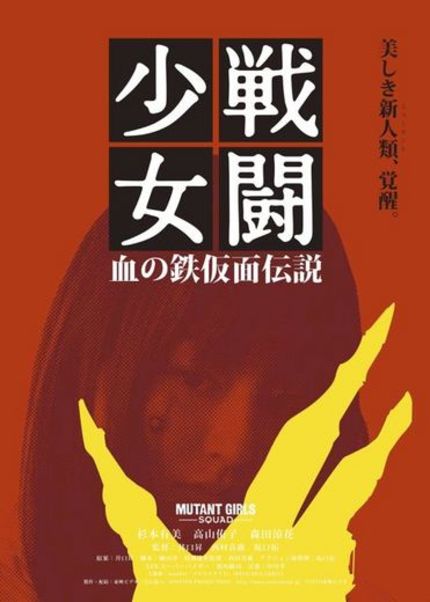 Oh, what a night that was. As those following the Twitch Twitter feed already know the Canadian premiere of Mutant Girls Squad came at Fantasia last night and brought a few surprises with it.

Next: Before rolling Mutant Girls Squad Nishimura also announced that he had brought a full trailer for his next feature, zombie apocalypse splatter fest Hell Driver. The film has just finished editing and has barely begun post production so what was shown was still quite raw and won't be made available online but was very impressive in scope and energy. Cay Izumi turns up in this, too, as a sort of pregnant zombie geisha wielding the fetus of her child - still attached by umbilical cord - as a weapon.In terms of the spirit of the film, Nishimura says it could be considered Tokyo Gore Police 2, though the stories are completely unrelated. And, yes, Tokyo Gore Police and Audition star Eihi Shiina plays a major role as the zombie queen.

Then came the movie itself and since we've reviewed that elsewhere I'm not going to get into great detail other than to say that both Nishimura and Iguchi deliver exactly what you'd expect from both. Lots of fun, lots of energy, lots of goofy jokes from Iguchi and crazy over the top gore from Nishimura. The revelation of the film, however, has to be the opening third directed by Tak Sakaguchi who manages to take teen idol Yumi Sugimoto and transform her into an entirely convincing action star. One sequence in particular - a very long, tightly choreographed single take shot with Sugimoto clearly doing all of her own stunt work - is an astounding bit of film that would be right at home in the 1970s canon of Meiko Kaji and announces both that Sakaguchi has turned into a very real director and that he may well have found a muse in Sugimoto. I want to see her in more starring roles, I want them soon, and I want them nasty and hard edged.

And finally, the post screening Q&A. That the Sushi Typhoon crew tend to do these wearing only fundoshi - traditional underwear, basically - has become tradition at this point, so it was no surprise when Nishimura and Walkow arrived thus attired. What was a surprise, however, was when producer Chiba rushed the stage dressed as a ninja and ripped Nishimura's off, leaving his director to do the entire Q&A absolutely buck naked with only a festival bag slung over his shoulder to cover his naughty bits. Aint It Cool's Quint was front and center for this and I do believe he got a little more than he bargained for in the deal.
Tweet Post Submit