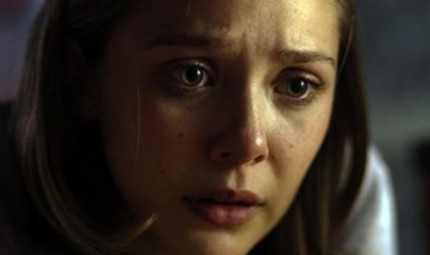 Loves me that found footage cinema. Just does. Don't like it? Don't enter this contest. Strictly speaking I'm not sure this is actually a found footage film but it is shot hand-held in one continuous take and stars Elizabeth Olsen as Sarah, a young woman who finds herself sealed inside her family's secluded lake house.

Taken from the PR folk

"With no contact to the outside world, and no way out, panic turns to terror as events become increasingly ominous in and around the house. Directed by filmmaking duo Chris Kentis and Laura Lau, Silent House uses meticulous camera choreography  to take the audience on a tension-filled, real time journey, experienced in a single uninterrupted shot."

Yeah, yeah but is it any good? I haven't seen La Casa Muda (2010) but am expecting this to be at least on a level with the Rec [2007] remake Quarantine [2008]. The filming styles are similar and the source material will probably be copied exactly. In other words expect to have fun and hope to be pleasantly surprised. If you are one of the blissfully unaware then expect to have the living hell scared out of you.

Winners will be given a Gofobo code via email on the day of the screening March 5.

Email me your name with SHHHHHHHHH in the subject line.