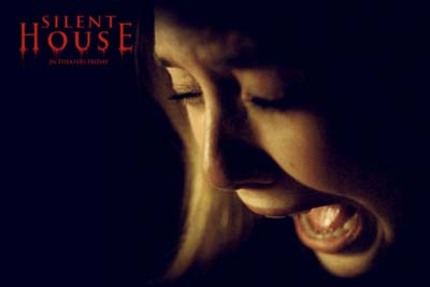 Chris Kentis and Laura Lau, best known for their directorial collaboration on Open Water, are back with a the new thriller/horror film, Silent House. It stars Elizabeth Olson and opens this Friday.

ScreenAnarchy: You've joined a very exclusive club of films that have been ostensibly shot in one take. Rope, Russian Arc, etc. The technology has changed greatly over the years but it's still a huge challenge and a huge feat to have pulled this off.

Chris: We were approached to do the film, it's a remake of a film from Uruguay, and as soon as they mentioned it was in a single take, the hooks were in me. First of all, I have an editing background so I thought, "Wow! That's such a different way to tell the story." It would be a big challenge but it's also a way to give a different experience to an audience. It's a completely different way of experiencing a movie.

ScreenAnarchy: As you began preparing to make the film, how much did the one take concept permeate every other decision? I noticed that the cinematographer, Igor Martinovic, had documentary experience on movies like Man on Wire and Elizabeth Olson has a background in theater.

Chris: Yes on both accounts. We knew there would be demands on both of them that you wouldn't normally find when making a film. I actually think that making this film for Elizabeth was even more challenging than live theater in a certain way because she is taking herself to an emotional place and doing these long takes. If one thing goes wrong, one guy misses his cue on a light, then we're back to square one. In theater, you'd roll through it and find a way to the end but here that's all worthless and you have to start all over each time. It took 20 to 30 tries to get some of these shots. It was a very grueling process.

ScreenAnarchy: I hate to ask a magician to reveal their tricks, but was this all really one long take or were their carefully hidden edits?

Chris: It's made up of several long and complex shots. The reasoning behind it is that doing it all in one single take would be overly limiting and we wanted to be able to push every moment as far as possible with our budget and other constraints. It all came down to making sure we got shots that would serve the story.

ScreenAnarchy: Did you find that you had to make sacrifices being that you couldn't set up each shot for each moment on it's own and if so, in what ways did you compensate for that?

ScreenAnarchy: What was the ratio of rehearsal time to shooting time? I imagine it was the inverse of what you'd find, traditionally.

Chris: After we had the script done and we had the location, me and Laura went out to the house and Laura played Sarah and I had a camera and we'd go through the entire movie from beginning to end over and over again. Laura would have the camera sometimes and we'd iron out all kinds of things so we had a really good idea of everything before we brought a crew on board.

Laura: Then we began the rehearsal process with all the actors. We had two weeks of rehearsal and then three weeks to shoot it.

ScreenAnarchy: How did you find the house in the first place? You must've had a huge list of criteria you needed in a single location.

Chris: I like location scouting. It gets a little nerve wracking when you get closer and closer to your start date and you don't have your location.

Laura: I just want to say quickly that the house was critical. Not only does all the action take place there but it's really a character in the film. Houses have personality, they have history. We needed a house with history but we also needed it to meet our technical needs. It had to have high ceilings and it had to appear isolated because we didn't want to divide up and shoot our interiors and exteriors somewhere else. We didn't want to cut! We wanted to go from inside to outside and outside to inside without cutting. New York City is a pretty developed area and we were looking over two hours outside of the city to find a place.

Chris: And as it turns out we had a production designer who found a place in New Rochelle about 20 minutes out of the city. It was pretty amazing that we found something so rural even though it was really surrounded by so much urban.

Laura: We were able to shoot around the buildings that were there.

Chris: We had to put up camouflage netting to hide a building. There was a club right there - a place that had weddings and music and stuff on the other side of the fence. They would be blasting music half the time.

ScreenAnarchy: Working as a team, which you've done on two other movies, must have it's benefits and it's own unique challenges. What is your process of working together and splitting the work up but also keeping a cohesive vision?

Chris: I'd say that the constant is that we collaborate on every decision in every way. On this picture, Laura wrote the script and had such a deep understanding and she delved into some dark stuff and had a real passion there. Because of the nature of this production, it wasn't like we could sit there and role the camera and get the close up and then the actor comes and you can have a discussion and say, "why don't you try it this way." There was so much going on and so much needed in each shot, the last thing  anyone needed is two people saying different things. Early on I said, "Laura, you direct the actors. All direction should come from you." I spent the whole time in video village, assessing things and making my notes and then I'd come out between takes and make adjustments. I would go to Laura and whisper my thoughts and feelings and we'd discuss and I'd get her's and we'd get to an agreement and Laura would communicate that to the actors.

ScreenAnarchy: The previous film you two made together, Open Water, was similarly based on true events, albeit ones that were missing a lot of the real life details. A lot of imagination is required to fill in the blanks which is a fairly unique process. What attracts you to stories and projects such as these? Are you concerned about accuracy in these cases?

Chris: It's interesting because Open Water was just a gut reaction as a scuba diver and I heard about the story and there is no way of really knowing what happened. We took our best guess. In this case [with Silent House] we were asked to do this based of existing material.

Laura: I think it's the same thing though. There wasn't a lot known about what really happened and so we had to use our imagination based off a few details.

Chris: On the flip side, I'll say that there are other projects we're involved with now that are based on other books and events and the people are alive where I am like a watch dog like you can't believe. I want to get it as right as possible. When working from a book, having the author involved, when you have the actual participants, I want to get every shoelace right. I want to get every emotion, every detail right.

ScreenAnarchy: In the story of Silent House, there is more going on than just a haunted house. There is something deeper and more personal to the characters and this really becomes prominent in the last act of the film. It helps the film feel much more emotionally grounded. Without going into spoiler territory, was this something that you had in mind since the beginning? When structuring the script, was this an important framework that drove the plot points? How did you pace out the red herrings and details about the origin of what is going on?

Laura: That was absolutely there from the beginning. It is about one character's experience. One character's reality and what it is that she's discovering and what it is she's terrified of. We definitely wanted to take the audience on this journey with her because she doesn't know what's going on either. She doesn't know, if these are the squatters. What is going on here? We discover with her as she discovers what's going on. That was the guideline for how the script was written.

ScreenAnarchy: On top of the psychological horror, there are also the eery moments, the suspense, the sudden loud noises that make the audience jump. These worked well in conjunction with the psychological underpinnings. Can you speak a little bit about designing the shots to maximize the scariness without being able to have sudden cuts or edits of any sort.

Laura: The continuous take fills in for what you get from those smash cuts. Because of the single take, you are trapped with this character and you get no relief. It's like a pressure cooker. We hope that builds a certain kind of tension that you wouldn't get if you were cutting.

Chris: At the same time, we were very conscious that we couldn't be repetitive. We're always following people around but we didn't want to repeat any shots. It was a fun challenge to keep mixing up the shots and to figure out ways to achieve the same effect that you could with an edit, without one.

ScreenAnarchy: Elizabeth Olson is very vulnerable. She is screaming and crying and has snot dripping down her nose and once that starts, she has to work with it for the duration of the take. It's not a particularly glamourous role. Was she game from the beginning and what did she bring to the table that you didn't expect in some of those sorts of moments?

Laura: She was amazing from the beginning. She is so young and enthusiastic and really put herself into it without any trepidation. I think she brought a lot of nuance to the character because she didn't want to spend the whole movie screaming or over playing it.

Chris: And she wanted to pace it out and build the suspense from within the character since it was all on her shoulders. To single out a scene is hard because this movie is Lizzy.

Laura: She was really inhabiting the role and the whole atmosphere around the filming - she was actually dreaming about it at night and we'd incorporate some of that into the movie. We would rewrite it in. There was definitely an ensemble feeling with all of the cast there, waiting in the wings. It's all about identifying with her and all the other actors worked really well in supporting her and all of that.

ScreenAnarchy: Last question. What are you guys working on next? Are there any projects you can talk about yet, that we can look forward to?

Chris: The two that we have in line next are two original pictures that are inspired by true events.

Chris: Yeah. But I think these are different than anything I've seen before. I like taking things from reality and looking at them in a very different way.

Laura: Both of these projects we're working on are thrillers and hopefully we can share more details soon!