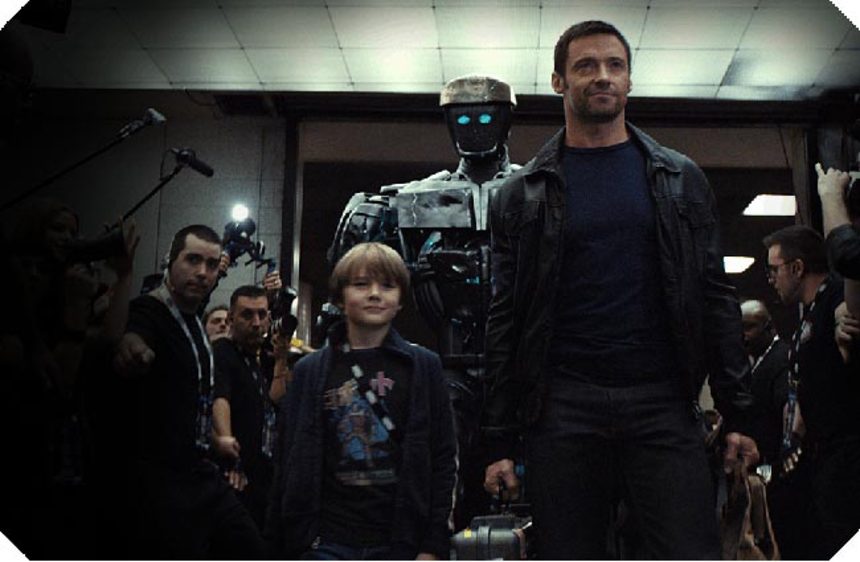 This week Real Steel hits DVD and Blu-ray in North America. My review is forthcoming, but no one was more surprised than I was at the how effective the mix of sports and shamelessly earnest heartstring-pulling drama was thanks to some fine work by lead Hugh Jackman and his young costar Dakota Goyo. My review is forthcoming, but in the meantime, I had the chance last week to speak with the film's director, Shawn Levy about bringing Real Steel to the screen, and the technical hurdles in getting you to care about a fighting robot.

ScreenAnarchy: What was the appeal of the material for you? What drew you to what was ostensibly a "robot fighting movie?"

Shawn Levy: Well, what drew me to this "robot fighting movie" was the opportunity to make it more than a "robot fighting movie." That's the most honest answer I can give you. And what's been interesting in the response to the film, is that while people have been impressed with the visual effects and the fight sequences, the people who had the most affectionate and emotional response to the movie, did so in the connection with that father-son redemption tale. And I've seen a lot of spectale-laden, machine-heavy movies, but I thought there was an opportunity--certainly with [producers] Steven Spielberg and Bob Zemeckis' support--to tell a more humanist character story within the package of a big, brawling, high-concept action picture.

ScreenAnarchy: I loved the chemistry between your leads, Hugh Jackman and Dakota Goyo as his son. What kind of conversations where you having before filming about your aims for the film?

Levy: Well, the truth is that chemistry is pretty un-directable. I mean, that's the reality--both romantically as well as familiarly when you have a parent and child relationship, it's two actors faking it. So, it's less that we talked about it cerebrally, and more that I just had the guys spend time together. They would hang out together, they would read some scenes together, we would talk, we [would go to] an amusement park together.

So a lot of that chemistry, it's either going to happen or it isn't. And you can help foster it by encouraging an off-screen connection. It's also made 10 times easier when you have actors who are super talented--and what's unique about Hugh and Dakota is that they are successful, great actors, but they are very authentic, accessible people, and that really helps. 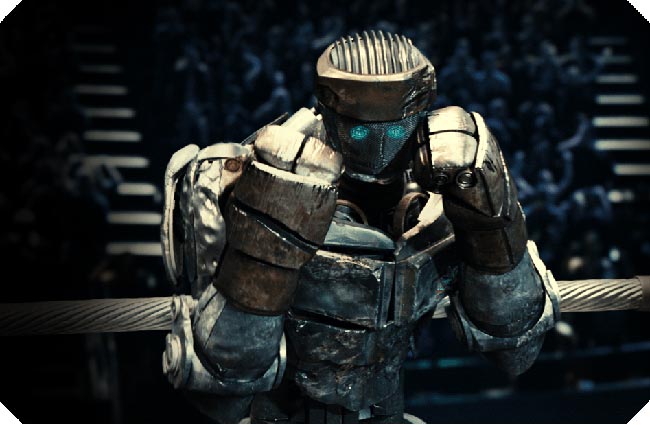 ScreenAnarchy: And this whole relationship is actually a triangle with Hugh, Dakota, and Atom [the robot]. What kind of decisions were you making in preproduction about the look of Atom and creating that additional point of audience entry and identification?

Levy: I guess I felt like--as you say, the movie is a triangle. I always called it "my trinity of redemption," and it's father-son-machine, and that machine is Atom. And he needed to have something that, frankly, resembles a soul. And so as we designed the robots, we wanted to have certain ones to have swagger, we wanted others to have an idiosyncrasy in their assemblage and design. But with Atom, we almost stripped away those elements and we went with a very anthropomorphic robot who does not have paint, he's dented, he's messed up--and most notably--he's the only robot with no face.

And I remember when I showed the design of the robot to Bob Zemeckis, and he commented that "Wow, your hero robot is the only robot without a face." And he said, "That screen mesh that is Atom's face will be the screen that the audience will project on to. And we will feel for Atom because we're able to project on to him what we feel for him." And indeed, the way audiences reacted to Atom in particular, and the way that kids have reacted to Atom bears out the truth of that, that assessment by Zemeckis.

ScreenAnarchy: What kind of conversation did you have with Mr. Zemeckis about the mo-cap for the film and with regards the movement of the different robots?

Levy: I wanted to anthropomorphize Atom and several of the other robots, and I didn't want to do a fight movie where we did it basically like I did Night At the Museum or Hugh did Wolverine the old fashioned way where you shoot empty frame, and then some animator that you'll likely never meet will draw in movement that's retrofitted that someone did in a shot with no clue as to what was happening.

I wanted to operate to the fights, I wanted the camera operators to operate as if they were in the ring. And so we had to pre-capture the fights, and the way to do that was with real human fighters in a mo-cap stage. And in that regard, I was greatly helped and influenced less by Zemeckis--who is obviously the godfather of mo-cap--and more by my visual effects and production crew, many, many of whom had come straight off of Avatar, and were very fluent with this emerging edge of Simul Cam, mo-cap technology.

ScreenAnarchy: Why was boxing the preferred fighting style of choice here, whereas earlier in the movie it's opened up to a few more fighting styels?

Levy: Well, in the underworld fights, it was more UFC/MMA-influenced, but the WRB (World Robot Boxing) league would have a more regimented, codified set of boundaries. It just felt right. I will say this: if we get the privilege of selling a lot of DVDs and making a sequel, I'll just say that we'll seriously loosen those regulations. 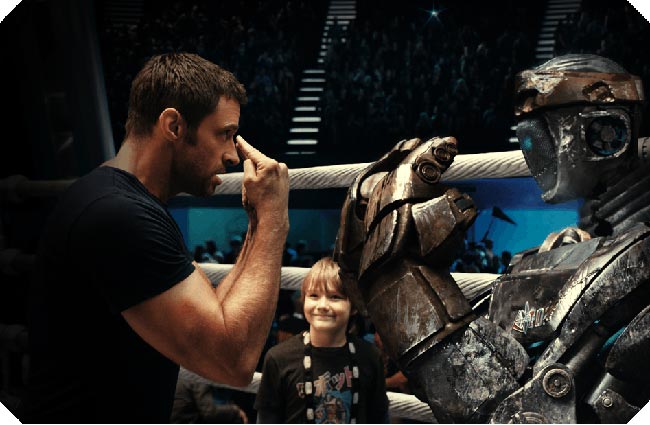 ScreenAnarchy: Was there any kind of trepidation going into this about juggling a family film, a sci-fi film, and a family drama, while trying to settle on the right tone or balance?

Levy: I'm sure that this was naïve ignorance, but I didn't. I had trepidation about doing such a dense, visual effects, complex movie--that was scary to me, because I knew none of it, and I had to learn it. And it was daunting and hard at first, but very, very gratifying.

The tonal blend--I just felt from my very first meeting with Spielberg, I felt like whether it was right or wrong, I had a clear sense of what I wanted to do with the tone. And I didn't know whether Steven would like it, I didn't know whether audiences would like it, but I knew that it felt right to me. And that's really the only way you can direct a movie--to make the version that feels like the right version to you. And if you question it too much, you're probably going to mess with your own thing.

ScreenAnarchy: Finally, what kind of conversations were you having with the effects team and the production designers about the future portrayed in the movie? Everything looks very much of the now, but slightly more polished, more advanced.

Levy: If you watch the Blu-ray and one of the commentaries, the mantra that my production designer and I set early on was "retro-forward." I didn't want the future to feel futuristic because I didn't want the movie to feel distant from us. I wanted it to feel accessible because I wanted the emotions to feel resonant. So we built a future which--in some ways it's a very retro, nostalgic vision of America, but it's almost in a collage with future technology [and] future sport. And as my designer pointed out, a roadside diner looks the same now as it did 50 years ago, but your cell phone doesn't. And I wanted to show how certain elements of our cultural landscape evolve very, very slowly, while others are at an incredibly accelerated rate. And I wanted to literally do a pastiche of retro and forward. And that's how we ended up with that aesthetic.