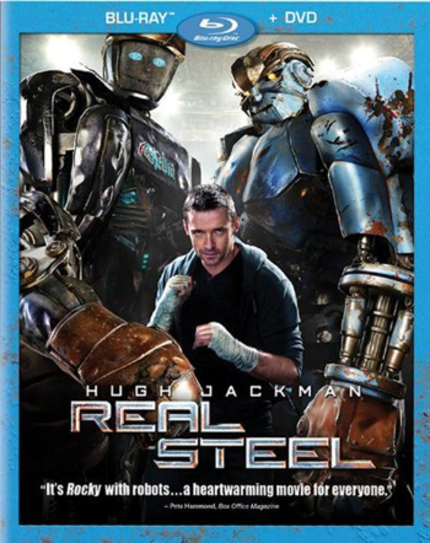 I'm not sure there's a persuasive review here for why you should see Real Steel--its every move can be predicted from the beginning, its motivations borne out of producer Steven Spielberg's obsession with absent father narratives, its technical acumen bred of fellow producer Robert Zemeckis' longtime mo-cap fetish. It's the story of an absentee, lousy father, forced to travel the road with the son he never knew and if you guessed that by the end the two of them find something in common, making the father a better man, well you win exactly nothing. The thing is, it's an oft-played song, that just happens to be performed by artists who slip easily into their parts (that metaphor got lost pretty quickly, sorry). With the exception of the technical flourishes and the fighting robots high concept, there's very little new here, is what I'm trying to say, but Hugh Jackman and Dakota Goyo, and even Atom, the fighting robot that brings them together form this triangle of emotional engagement. The emotions are simple, the beats are known, and either because of or in spite of this, I loved director Shawn Levy's film.

Ostensibly based on the short by Richard Matheson and the Twilight Zone episode it later inspired, Real Steel follows down-on-his luck former boxer now robot wrangler Charlie (Jackman) who finds himself in possession of an unwanted son, Max, after the boy's mother dies in an accident. First off, I should note that if there's one major flaw to the film, one that could even be considered fatal to some potential audiences, it's that it kind of glosses over the boy's grief or any kind of feelings about the mom, save for a perfunctory scene near the end.

But then, the script really seems only concerned with these two and the world they carve our for themselves as they rebuild a broken-down sparring robot and start throwing it in the ring with better-built, tougher opponents. "Atom" they call it, and here come the boxing tropes: Atom is an older model robot that should by all rights be scrap in the ring but he's able to take damage (and the movie even flirts a couple of times with the idea that the mechanoid may have some AI). It's an all-American sports movie and yes, the villains are cold, rich foreigners (Karl Yune, Olga Fonda) who don't have time for the little guy.

I feel like I keep apologizing for the movie, but I think that's simply because it's a patently ridiculous idea on paper, but in execution, it simply pushes all of the right buttons. It's a movie programmed to elicit delight, but it never feels as cold and heartless as that summary would tend to suggest. The script is populated with plenty of colorful characters to keep the landscape vivid, the mo-capped robots and vividly realized and move in plausible ways (they have a refreshing solidity and weight about them), the comedy is never cheap, and the turn at the end is earned. Most importantly, its characters are plausible, and act and react in ways that human beings would--they're not sacrificed for the sake of the special effects.

It's not high art, but it really doesn't have to be. I loved Real Steel, and I think some of you out there reading the movie I've described here might too.

Real Steel hits Blu-ray with a pretty decent collection of special features, including a pleasantly engaged commentary by director Shawn Levy (I definitely mean engaged--Levy is quite the hype man for the movie). In addition to the commentary, you've got the full compliment of making of's and deleted scenes.

The picture quality is very pleasing, the sharpness allowing the meticulously-rendered 'bots their due on the small screen. I have one minor complaint/concern about a mid-movie scene set in front of a motel parking lot where Jackman trains Atom, but I'm not sure it's a matter of the picture quality but instead simply the original effects: if you'll look, Atom looks slightly compressed from the left side, his dimensions not quite right with what we've seen up to that point. This minor flaw aside, the movie looks terrific on the disc.

Audio-wise, the licensed soundtrack and Danny Elfman's fairly forgettable score boom out of the 7.1 DTS track. Likewise the crunch and crumble of the robots in the ring.

Real Steel is available now on Blu-ray, DVD, and VOD