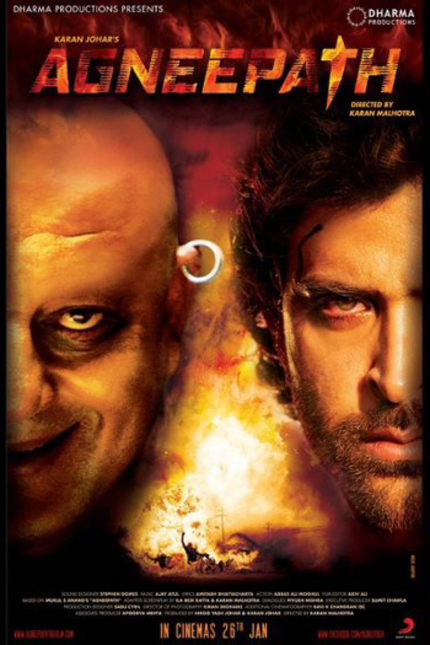 Agneepath is one of my most anticipated films of 2012 from India or anywhere in the world. The film stars Hrithik Roshan and Priyanka Chopra, two of the prettiest people in India, doing some nasty stuff.  It's a revenge story, and while the plot hasn't been completely spoiled, some key points have come out through various media channels.

Roshan plays Vijay, a young man whose father was killed by a local gang lord.  The man behind the death takes Vijay under his wing, without Vijay's knowledge.  Flash forward about twenty years and Vijay finds out the truth and goes on a rampage of revenge.  Nothing too out there or unusual, but the trailers have shown some serious stylistic chops. This is going to be a gritty and colorful film.  Those two tastes aren't usually found together, but I have confidence in what I see.

Karan Malhotra, the film's director, is a long time assistant to producer Karan Johar, as well as several other big time Indian directors.   He seems to have a good feel for this action stuff, and a wonderful eye. Agneepath is his first film as director, and if the film is anywhere near as solid as these trailers, he's got quite a debut on his hands.

The film's success is also encouraged by the cast, who are among India's finest actors.  Hrithik Roshan went from a rubber legged pretty boy to a serious actor with films like Jodhaa Akbar and Guzaarish, and he's pretty damned good.  Priyanka also proved that she's got some chops in films like Fashion (for which she won a Filmfare Best Actress award) and last year's 7 Khoon Maaf.  On the dark side we've got Bollywood legend Rishi Kapoor and a very angry looking Sanjay Dutt. All signs point to success for Agneepath, let's hope they don't screw it up.

Enough of me, here are three minutes of your life well spent, please check out the new trailer for Agneepath.