Blu-ray Review: AGNEEPATH Is Worth Your Money 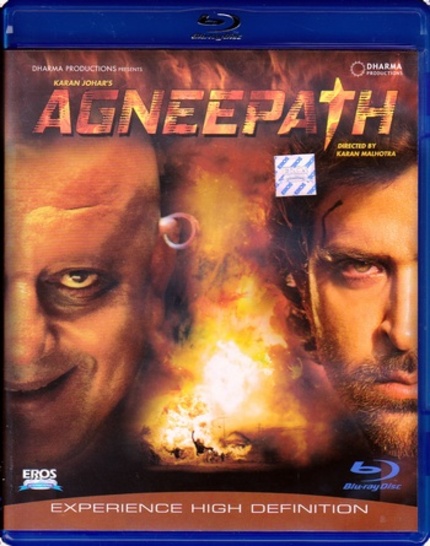 My favorite new film of 2012 has finally secured a Blu-ray release. Agneepath blew me away when I first saw it on opening night, and a week later when I took my wife along, I was even more impressed. Indian distribution being the convoluted, unruly, and downright unreliable beast that it is, the film's home video status has been up in the air for a while. However, last week a Blu-ray release was finally made available, about a month after the DVD release. These discs are typically not available at Amazon or the other big vendors, so I wanted to give you guys the chance to pick it up through the channels that I use most frequently, and with whom I place my trust. So, here is my original review of the film, along with some brief comments about the disc and a link to a reliable vendor I use pretty frequently.

My hopes were extremely high heading into tonight's opening of Karan Malhotra's debut feature, Agneepath. After seeing the first teaser for the film last fall, it immediately shot to the very top of my Bollywood-blockbusters-to-see list. The challenge with films, and doubly so with Indian mainstream cinema, is taking that three minutes of concentrated excitement and spreading it out over the length of a feature, in this case, a seemingly unwieldy three hours. Was Malhotra and his cast able to translate that initial excitement into a full-length film worthy of my anticipation? In my own case, the answer is a resounding yes.  The bar for Bollywood revenge thrillers has been set high in 2012, and Agneepath is lighting the way.
Agneepath is a remake of a 1990 feature that starred Amitabh Bachchan as Vijay Dinanth Chauhan, a man on a mission. In this film, much of the fundamental setting and several characters remain, but the story has been completely reworked. This new version jettisons some of the most popular pieces of the original, including a much beloved turn from Mithun Chakraborty as a sidekick with a romantic subplot. However, in the place of the missing pieces, Karan Malhotra and his team have dropped in even more melodrama, two truly evil villains, and an small army of hijra (transgendered women), in addition to some truly stunning set pieces. If nothing else, this film shows just how far Bollywood has come in terms of production value (and costumes) in the last twenty years.
This time around, Vijay Chauhan is played by Hrithik Roshan, one of Bollywood's greatest movie stars who can put in a good performance when given the right material. Chauhan comes from the small rural island of Mandwa, which is taken over by Kancha Cheena, a crime lord who uses his captive population to churn out cocaine and who is responsible for the death of Master Dinanth Chauhan, Vijay's father, local school headmaster, and all around saint. Vijay and his mother leave the island following the murder and head for Mumbai, where Vijay begins plotting Kancha's downfall.
Recounting the plot of this behemoth film could take up a thousand words, easily, so I'm not going to do that.  The film is riveting for all but probably fifteen minutes of its run time, and even that is spread out into a few here and there. The vast bulk of Agneepath is dedicated to exploring not only the characters, but the world in which they live, as well as creating settings wherein the most magnificent of set pieces could exist. This film is a throwback to old school Hindi masala, but in a way that feels more modern, with far less hyperbolic acting, and more scope.
Hrithik plays Vijay with an intensity we don't often find in Bollywood stars, who often resort to overacting when given material designed to evoke an emotional response. Roshan's piercing green eyes convey a pain, a desire, and an adamant focus that says more than words. The film really rests on his performance, even though there are several other big names putting in solid performances, if Hrithik isn't believable, the whole thing falls apart. After seeing his performance in 2008's Jodhaa Akbar, I knew he could act, but this film really drives it home for me. He is, all at once, an imposing and comforting presence on screen. When he cries, we believe it. When he rages, we believe it. The very end of the film plays the masala card, and we end up with something of a heroic bloodshed denouement, but apart from that, Vijay is a character with an intense passion and purpose for being, and I loved it.
However good he was, Hrithik's performance didn't occur in a vacuum, and his supporting cast really stepped up to the plate and delivered. Priyanka Chopra, as his love interest, Kaali, did a wonderful job oscillating between a vain and entrepreneurial salon owner and Vijay's closest confidant. It is worth noting that she is also one of my favorite Bollywood dancers these days, especially since we've now got to bid farewell to Aishwariya Rai for a while. Vijay's hero would be nothing without some serious villainy to contest, and Rishi Kapoor and Sanjay Dutt make a great pair of truly evil bastards. Whether it is the selling off of the daughters of the local debtors to the highest bidder from Rishi's Rauf Lala, or Dutt's Kancha enslaving an entire island to feed his drug smuggling dreams, these guys are a couple of gems.
Agneepath is the rare film that delivers on its promise, which was great to begin with. The scope and spectacle of the film is occasionally awe-inspiring, and never once is it boring. Whether it is setting an assassination attempt within the religious frenzy of Ganesh Chathurti, or an army of transgendered women with machetes attacking a slave sale, they aim high, which is what I like best about Bollywood. If they are going to fail, they are going to do it spectacularly, but Agneepath most certainly does not fail. It aims high and hits its mark.
This is a film that the uninitiated Bolly-curious film fan can watch and get into. Agneepath is overwrought and melodramatic, it features several musical numbers choreographed within an inch of their lives, and lead characters who are exponentially more attractive than anyone in their immediate vicinity, but that's what makes it great. Agneepath's success is in Karan Malhotra's conscious decision to embrace the thing that makes Bollywood masala so appealing, the spectacle. It feels as though director Karan Malhotra finally got his hands on the reins for once and aimed for the stars. Well, congratulations, Karan, Agneepath is fantastic.

Eros Entertainment's Blu-ray release of Agneepath is pretty damned good. The image quality is remarkably solid, and the bright hues and depth that was so apparent on the big screen is well established in this home video edition. Even more impressive, in my eyes, is the DTS-HD MA audio track, which takes the massively melodramatic score to new heights and will punish your speakers in the best way possible. The song sequences sound magnificent, and look great. My only minor gripe with the image quality is the fact that the songs are intermittently marred by an Eros watermark. This is a common, though thoroughly unpopular, tact with Indian home video, where piracy is a major issue. Apart from that I have no qualms about recommending this disc.

Unfortunately, in what has become standard operating procedure for Indian Blu-ray releases, there are no special features at all provided on this disc. The DVD edition, on the other hand, includes a making of featurette, a deleted song, O Saiyyan, and the making of two songs from the film as well as deleted scenes from the film. Being the glutton I am, I will probably pick up the DVD just to make my collection complete, but this Blu-ray is so good that I may wait a little bit.

This film is fucking fantastic, and deserves more attention in the mainstream than it's gotten. Genre film fans, get behind this film!

The vendor below, Movie Time Video, is very reliable and I use them frequently. Their prices are fair and shipping costs (within the US, at least) are extremely reasonable. I definitely recommend them.
Tweet Post Submit