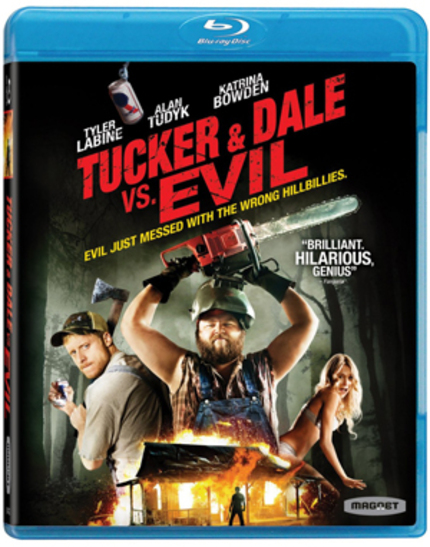 After eighteen months in distribution purgatory, Eli Craig's ingenious inversted slasher, Tucker & Dale Vs. Evil is finally hitting US home video. I first saw the film in April of last year and it made my top ten of 2010, after rewatching it twice for this review, I have to say I was right to hold it in such high regard! The film is the best horror comedy to come along in quite a while. Magnet Releasing have done right by the Tucker & Dale team and put out a pretty fantastic Blu-ray for a film that deserves special treatment.

Tucker and Dale are two best friends on vacation at their dilapidated mountain house, who are mistaken for murderous backwoods hillbillies by a group of obnoxious, preppy college kids. When one of the students gets separated from her friends, the boys try to lend a hand, but as the misunderstanding grows, so does the body count.

Though the horror comedy may have become ubiquitous in the last couple of decades, there are very few that stand on their own two feet. Perhaps the first truly successful film in the post-slasher era in this subgenre is Evil Dead 2. In the last 25 years since then there have been many attempts, but few successes.  Braindead/Dead Alive, Re-Animator, Shaun of the Dead, and very few others have been up to snuff in that time period, but I truly believe that Eli Craig's debut directorial effort is among the all-time greats.

There are a number of reasons that this film is such a success, but the main strength is in the lead casting.  Alan Tudyk (Firefly) as Tucker and Tyler Labine (Reaper) as Dale are absolutely perfect as the kind-hearted, good-natured hillbillies heading into the woods to fix up their new vacation home. T&DvE is an upside-down look at films like Deliverance and Wrong Turn, in which demented hillbillies threaten and savage urban adventurers and weekend warriors who dare to venture into the wild. However, this time around, Craig and company imagine the scenario in reverse, where the hillbillies are the innocents and the irritating preppy college kids are the psychos. It is a genius move, and the film is absolutely packed with genre conventions turned on their heads.

The action really heats up when Katrina Bowden (30 Rock) as Allison takes a spill while skinny dipping and bumps her head.  Tucker and Dale save her, but the college kids misinterpret this act (as they do every act) as an act of hostility and kidnapping. While the college kids, led by a particularly psycho frat boy named Chad (of course), plot their siege on Chez Hillbilly, Dale and Allison strike up an unlikely friendship that carries through the film and adds a sweetness to the gory proceedings.

The film takes several wild turns when the college kids' planned rescue efforts go awry and people start dying. This is the good stuff, and I don't want to spoil it, but I will say that there are genuinely hilarious gags in this film that are absolutely stunning. When I saw the film theatrically at Dallas IFF, the crowd was in stitches from beginning to end, and even watching again alone at first and then with my wife, I couldn't help laughing out loud, even knowing what was going to happen.

Eli Craig has a bright future ahead of him. His talent as a screenwriter and director are incredibly impressive for a first time feature maker. I only hope that this film succeeds in the way that it deserves to and that Craig gets more opportunities to make the films he wants, because the guy obviously has a lot of talent.  Tucker & Dale Vs. Evil is one of the finest comedy films in recent years, and if you don't mind a little gore to go with your laughs, you owe it to yourself to own this film.

Tucker & Dale was shot on the RED ONE camera back in 2009, so it was one of the earlier models.  However, because the film for shot about 99.5% digitally, the transfer on this disc is near perfect. The image is intentionally desaturated for a large portion of the runtime, but not to a comical degree.  The shadows are deep but still exhibit appropriate detail, and fine detail in close-ups is impressive.  I couldn't have asked for a finer image from this film.  The DTS-HD MA 5.1 audio track is also impressive, with good directional effects and use of LFE.

This disc is another Magnet release that gets a little bit more than the typical touch as far as extras are concerned.  We get an audio commentary from Craig, Tudyk, and Labine, which is hilarious and contains tons of interesting anecdotes.  Tudyk is mainly quiet, but Labine and Craig are very active and leave very few dulls spots except to highlight favorite line readings in the film. There is also a very EPK-like "Making of" featurette that runs about 20 minutes. One interesting feature is a 17 minute recut of the film titled, "Tucker & Dale ARE Evil", which shows the events from the college kids' perspective.  Rounding out the bonus material are some storyboards, outtakes, a commercial for the film from HDNet movies (which reuses a lot of the "making of" footage), and a theatrical trailer.  While this doesn't reach Hobo with a Shotgun levels of extra features, it is probably the next best presentation Magnet has done.

I cannot recommend this film enough, and at the time of this review, it is really inexpensive at Amazon.  BUY IT!

Tucker and Dale vs Evil

Order Tucker & Dale Vs. Evil on Blu-ray at Amazon NOW