TUCKER & DALE VS. EVIL US Poster Is Here 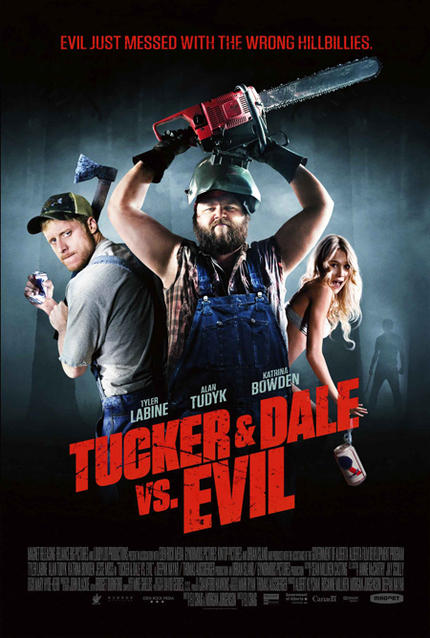 This film should be easily exploitable, yet somehow both the Maple and Magnet posters have been huge letdowns for me.  If you've seen the film, you understand why these posters are not only not representative of the film, but even misleading.  Worse than that is the fact that they aren't very good.  Tucker & Dale has had some decent promotional artwork, the original one sheet for festivals was great!  I can see how it might be a bit too gory to work in a theatrical setting on a larger scale, but where are they aiming the PR on this one?

Maybe I'm wrong, but I posted this poster to Twitter this afternoon and it was universally condemned as cheap/DTV looking, and misleading.  What do you think?  Am I being overly critical?  I just don't want Tucker & Dale to fail because it deserves so much better than this.

Let me know what you think in the comments.

TUCKER & DALE VS EVIL will be at this year's San Diego Comic-Con!
When: Friday, July 22nd starting @6:00pm
Where: Hall H
Who: Alan Tudyk, Tyler Labine and Director Eli Craig