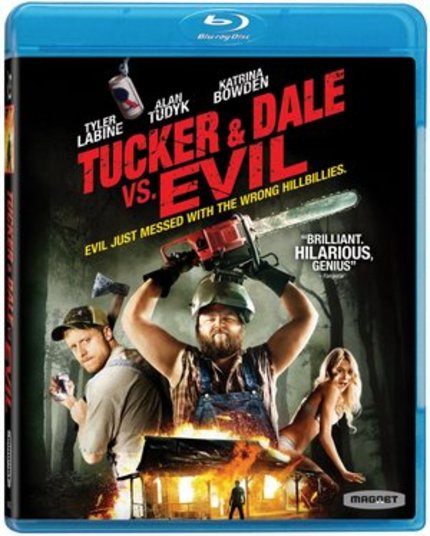 I thought this day would never come.

The absolutely brilliant horror-comedy Tucker & Dale Vs. Evil is coming to US DVD and Blu-ray via Magnet Releasing on November 29th!  This film is absolutely incredible and for almost 18 months it was the probably best undistributed film in the US.  It made my top ten for 2010, and with good damned reason.  Everything in the film is done right, and now you have the opportunity to own this gem!  Here's what Magnet has to say:

Best friends Tucker and Dale are excited for relaxing weekend of fishing at their secluded cabin. Unfortunately for them, evil has different plans when a series of misunderstandings and tragic events start killing a group of preppy college students who believe they are backwoods hillbillies out to kill them.Tucker & Dale vs. Evil has been a hit on the festival circuit after its debut at Sundance. It won the Midnight Audience Award at SXSW, the Jury Prize for First Feature at Fantasia, the Best Director Award at The Fantaspoa Film Festival, and the Best Motion Picture Award at The Sitges Film Festival. The Tucker & Dale vs. Evil Blu-ray and DVD bonus features include the making of the film and hilarious commentary with Alan Tudyk, Tyler Labine and director Eli Craig. The Blu-ray and DVD will be available for the suggested retail prices of $29.98 and $26.98 respectively.

Synopsis
Tucker and Dale are two best friends on vacation who are mistaken for murderous backwoods hillbillies by a group of preppy college kids. When one of the kids gets separated from her friends, Tucker and Dale try to lend a hand, but as the misunderstanding grows, so does the body count.

The kicker is that it is super cheap over at Amazon right now!  If you have any income at all, use it to buy this disc, you won't be sorry!

Pre-order Tucker and Dale Vs. Evil on Blu-ray at Amazon!