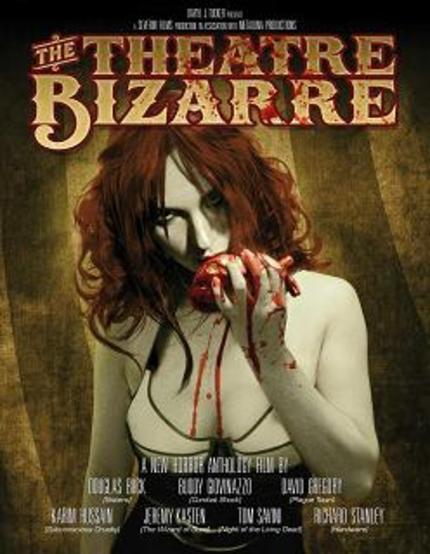 Horror's pretty dumb, right, when you get down to it? Subjecting ourselves to seedy vicarious thrills when if we took pleasure in the same things in real life we'd be clinically insane. Lots of people level this argument against genre film making but oddly the one fatal flaw in the anthology The Theatre Bizarre is how it makes this case against itself. Out of the six short films - and framing device - contained within, the best is not only head and shoulders above the other five it's so utterly restrained, quietly moving and unexpectedly profound that it makes most of the other directors look like children trying to get away with something naughty.

It's a shame, because much of the rest of the collection is hardly bad - even the mediocre stuff is at least interesting. We get a creature feature, a mournful, gore-soaked love story, a head trip in a disturbingly literal sense, a darkly comic FX reel - there's a great deal of talent in The Theatre Bizarre, but again, it's just that the man most people would dismiss out of hand trumps them all. You'll still laugh at the five guys sitting around the main table smirking about entrails and boobs, but it's their friend in the corner with the story heartfelt enough to make you cry that's the one you'll remember.

Richard Stanley's The Mother of Toads is fun, but there's barely enough material here even for a proper short. Two tourists are poking around the market in a rural French village when the guy, who's curious about all things occult, uncovers an unexpected curiosity and the stallholder suggests if he's interested in this stuff, there's a lot more she can show him. What follows is entertaining, and there's no law to say everything Stanley does has to be as momentous or wilfully anarchic as Dust Devil or Hardware, but it's a gooey trifle, good for a laugh over a few beers and little else.

Buddy Giovianazzo's I Love You is one of the better entries - after an average start, with a couple arguing over why she's cheating on him in what seems like a fairly unremarkable two-hander, this slowly turns into something far more affecting. It sours things a little with an ending that's far bloodier than it needed to be, but the splatter doesn't ruin it and the basic twist is a very solid, haunting reversal that even excuses a lot of the seeming weaknesses in the earlier conversation. It's not the blood that sticks to you: the twist keeps ramping up the tragedy with a pitiless certainty that keeps coming back while you're sitting through the other shorts.

Wet Dreams, from legendary FX master Tom Savini has a terrific start - a gleefully nasty opening sure to set any audience to nervous giggles - but it promptly goes on to squander just about everything this promises. Savini tries to layer different levels of reality into a story about a guy who's cheating on his wife, where the question is whether he's dreaming any given moment or someone else is but the cult icon doesn't seem up to balancing this with the dirty jokes and elaborate practical set pieces. The narrative vanishes down a rabbit hole and the violence turns uncomfortably vindictive, leaving this something only gorehounds will really want to watch more than once.

Douglas Buck's entry is the jewel in the crown, even though it's barely a horror feature at all. The Accident is a conversation between a mother and her very young daughter with the one trying to explain to the other why people have to die. It flashes back to a motorcycle crash the two of them witnessed, unable to do anything for the victim, the daughter seeing him there one minute and gone the next. Shaky, lo-fi and unassuming this little film is still one of the best things released this year - there's something heartbreakingly powerful about a director prepared to show a parent answering a child's big questions with an honest "I don't know", and the ending ought to get a tear out of most open-minded viewers.

Vision Stains is commendably ambitious, but director Karim Hussain (best known as Jason Eisener's DP on Hobo with a Shotgun) can't seem to rein it in and his short ends up more laughable than insightful. The story of a serial killer addicted to a compound distilled from the memories imprinted in the human eyeball - like that old urban legend - Vision Stains plays a ridiculous concept with a monstrous, self-absorbed lead utterly straight-faced and suffers increasingly for it. Kaniehtiio Horn tries her hardest as the murderer, but unfortunately the script doesn't begin to explore her self-delusions in enough depth and the inevitable grim finale simply feels comically overwrought.

Sweets also falls prey to the temptation to overreach, though its (literally) candy-coated excess is at least fascinatingly weird. A man pleads with his girlfriend not to leave him, with the many stages of their relationship represented as gluttonous indulgence. She agrees to stay, but it turns out she's just planning on visiting a fate on him that's the logical conclusion to his self-absorbed obsession. Director David Gregory slaps a frothy, music video gloss over proceedings that makes for compelling viewing - the man has countless Making Of segments under his belt, so he's obviously used to turning out pithy soundbites, but the underlying premise is left far too ambiguous.

Even Jeremy Kasten's Theatre Guignol, the framing device, tries to pass shopworn one-liners off as deep wisdom. A girl visits the deserted music hall across the street and finds living mannequins acting out a strange stage production that introduces the six shorts as fundamental human truths. Udo Kier is on great form as the master of ceremonies (with a fantastic makeup job), and the camp, seedy ambience worms its way under your skin but like most of the collection it's simply not the bon mot it thinks it is. Being told the cinema is a leech skimming off your very essence doesn't inspire you to think well of what you're watching.

Horror's far from intrinsically dumb, obviously, but it can seem that way if it gets caught up in trying to make something meaningful out of ketchup and flying limbs, or in bugging you to admit how transgressive it's being. Too much of Theatre Bizarre gets stuck fast in one or the other of these two pitfalls - yet The Accident just quietly gets on with telling a straightforward narrative and touches on something far more universal and ultimately more memorable as a result. The rest of the shorts deserve a look, at least, but Douglas Buck's astonishing effort is the one that gives this collection a heart. A strange recommendation, maybe, but even if it's just for fifteen minutes or so The Theatre Bizarre is still a must see.

(The Theatre Bizarre was screened as part of Manchester's horror film festival Grimm Up North 2011, which ran from 6th-9th October at the AMC cinema, Manchester, UK.)