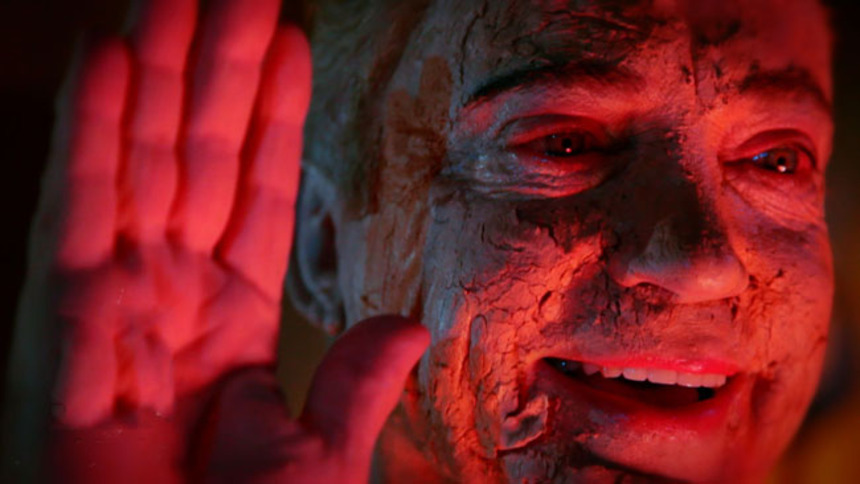 The resurgence in anthology horror films has been fascinating -- and heartening -- to see, both in a professional sense (filmmakers working together; short subjects receiving more attention when combined into a feature-length project) and a creative one (different approaches to a linked theme or subject).

"... has its genesis in Montreal's Fantasia, but its component parts were made by a diverse collection of filmmakers who traffick in gore and brains well outside the studio system. The films various chapters were made in four different countries, while retaining the feel of something built from the DNA of this particular film festival, focusing more on the FAN than the ASIA."

After suggesting that Douglas Buck's The Accident may be the best chapter in the anthology, Kurt concluded:

"While not a huge fan of the wrap-around segment, which could have lost several non-Udo [Kier] minutes without any consequence ... it does indeed tie things together a manner which suggests that in Horror, in any genre, storytelling is the still the key, and this keeps hard-core fans and curious bystanders coming back for the chills and thrills of cinemas most transgressive genre."

A few months later, Eight Rooks, one of our UK correspondents, saw the film at Manchester's horror festival Grimm Up North. He noted:

"Out of the six short films - and framing device - contained within, the best is not only head and shoulders above the other five it's so utterly restrained, quietly moving and unexpectedly profound that it makes most of the other directors look like children trying to get away with something naughty."

Spoiler alert: He agreed with Kurt that Douglas Buck's The Accident is the "jewel in the crown." More specifically:

"The Accident is a conversation between a mother and her very young daughter with the one trying to explain to the other why people have to die. It flashes back to a motorcycle crash the two of them witnessed, unable to do anything for the victim, the daughter seeing him there one minute and gone the next. Shaky, lo-fi and unassuming this little film is still one of the best things released this year - there's something heartbreakingly powerful about a director prepared to show a parent answering a child's big questions with an honest "I don't know", and the ending ought to get a tear out of most open-minded viewers."

You can read the entire review by Eight Rooks to see his thoughts on the other segments.

After watching the film myself, I heartily concur with my colleagues: Douglas Buck's The Accident is a stand-out segment, perfectly paced, photographed, and performed, a poetic meditation on life and death and the horrors of reality.

But I was also enamored by Buddy Giovinazzo's I Love You, which portrays a tense stand-off that occurs at the end of a relationship. André Hennicke is unnerving as Axel, a selfish man who has smothered his long-term girlfriend Mo (Suzan Anbeh) for years. The segment begins with him lying bloody on the bathroom floor in a well-decorated apartment, wondering what happened to him, wondering why his girlfriend won't answer his calls to her cell phone.

Next we see her outside the apartment building, talking with a handsome man; she says that she will just dash in, grab her clothes, and quickly explain to Axel why she's running away with her new beau. Things do not go as planned; she talks, he pleads; she explains, he remains baffled.

It is (mostly) a straightforward dramatic piece, and because Hennicke (The Free Will, Antibodies) and Anbeh (Agnes and His Brothers) are such gifted performers, the subtleties of language as it shifts from anger to bitter humor to outright violence are modulated beautifully. And the horror bits are played quite effectively for a strong finish.

Overall, The Theatre Bizarre provides a good jolt of midnight madness, with enough variety to keep things interesting for horror fans. Though I might wish it were a bit shorter overall, the segments by Buck and Giovinazzo make it well worth seeking out, and the other segments, at minimum, provide a good bit of ghoulish fun.

I will echo the praise for Buck's segment. Restrained, moving, beautiful.

Giovinazzo's was pretty good, had its moments.

The rest is awful, practically unwatchable.