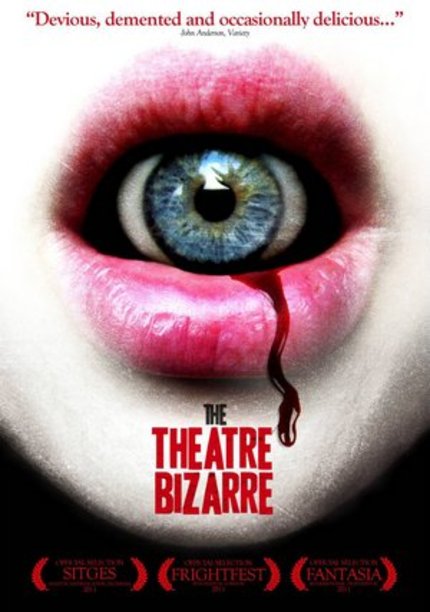 When Severin Films announced that they were co-producing a horror anthology with six of the edgiest talents in the business, my expectations were pretty high. Expectations can be a dangerous thing in that they can sink an above average film if it doesn't reach the heavens, and conversely low expectations can vault the average films into impressive territory. In this case, I had pretty high expectations based on the participants, and The Theatre Bizarre presented a very mixed bag when it was all over. I gave the film a thumbs up in the end, but I've read a lot of less than stellar reviews, and I can't say that I don't see their points.

The list of directors involved with The Theatre Bizarre is quite impressive. Richard Stanley (Dust Devil, Hardware), Buddy Giovinazzo (Combat Shock, Life is Hot in Cracktown), Tom Savini (Night of the Living Dead 1990), Douglas Buck (Cutting Moments), David Gregory (Plague Town), and Karim Hussain (Subconscious Cruelty) provide the main entertainment, while Jeremy Kasten (Wizard of Gore) provides the wraparound starring an effectively creepy Udo Kier in doll make up.  I can genuinely say that some of the best segments were great surprises from directors who hadn't made a huge impact on my life, while one director from whom I expected great things disappointed me. Then there is Tom Savini, who I kind of expected to turn in a dud, and more or less proved me right, though it isn't awful, it just isn't great.

Douglas Buck's The Accident is the clear, though unlikely, standout segment in the film. With a resume that includes the classic short, Cutting Moments, Buck's history did not prepare me for the emotional gut punch that The Accident delivered. This short film is, by far, the least gory, and technically doesn't include any horror elements, but through its powerful imagery and poignant dialogue it nearly brought me to tears. As atypical of the material as The Accident is, it still feels as though it fits in with stories of sadness, revenge, and horror, and is extremely well edited and constructed. Buck was heavily involved in the rest of the production as well, editing four of the six segments, and those which he did work on benefit from his touch, and hopefully this will lead to bigger things from a director who is sadly still overlooked.

Rather than harp on the segments that disappointed me, I feel more comfortable extolling the virtues of the films that I enjoyed. Buddy Giovinazzo's I Love You is a tale of jealousy, madness, and revenge that benefits from good dramatic performances from some local German actors, and some excellent gore effects. Karim Hussain's Vision Stains definitely provides the most potent visceral chills of the film, with a couple of particularly nasty close up money shots involving an eyeball and a hypodermic needle. The story works pretty well, also, but it was the effects that had my audience jumping in their seats when I saw the film during its limited run. Finally, I really enjoyed David Gregory's Sweets. This film departs from the mostly quite serious tone of the previous segments and delivers a gooey, gory, and gross take on the feeder fetish like none I've seen yet. The film felt a little bit like The Cook, The Thief, His Wife, and Her Lover, a little bit like Hellraiser, and a little bit like Charlie and the Chocolate Factory.  Solid work, even if it sways pretty far from previously established tones in the film.

From my omissions, you can certainly determine the segments which underwhelmed me. Richard Stanley's Mother of Toads had the makings of a great little film, but fell a bit short in the execution. However, I'll never tire of seeing the lovely Catriona MacColl (The Beyond, House by the Cemetery) on the screen, she's as beautiful as ever. I feel as though the crux of the problem here was that the actors just didn't have the heft to carry out their roles. Savini's Wet Dream suffered a similar fate, however, as much as I adore and worship at the altar of Tom Savini, I've never found him to be a very good director. Apart from a few neat gore shots, which he didn't create, and some quality nekkidness, I just couldn't get into the story he was trying to tell.

There is certainly more hit than miss in The Theatre Bizarre from my perspective. If you dig around the web, or even just around this site, you'll find dozens of reviews with dozens of opinions. Any anthology is bound to create some critical dissonance, but I appreciate what Severin and Metaluna were going for, and I think what they achieved to a large degree. The horror anthology is on its way back to the forefront these days, with The ABCs of Death coming soon and The Profane Exhibit hot on its heels. The Theatre Bizarre is a good place to start for those interested in the style, and I definitely recommend at least checking it out.

The Theatre Bizarre comes to us on DVD from Image Entertainment. I will admit to having been spoiled rotten by the glut of Blu-rays hitting the market, and that it does make me less tolerant of the typical decent quality DVD. I find it difficult to determine what a good DVD looks like, let alone an anthology which was shot of various and sundry films, cameras, and formats. Overall it looks pretty good, some segments look better than others, but I think I'd chalk that up to the format differences. The audio is also pretty decent, but nothing to blow your eardrums out, this really isn't that kind of film.  An above average DVD for an above average film.

Included on the DVD are several interesting bonus features, including a great commentary track that easily takes the cake for me. The commentary track features each of the directors and various cast and crew discussing their films and the productions in depth in a way that kept my attention moreso than most commentaries do. Sadly, Douglas Buck didn't contribute a commentary for his brilliant short, but I'm almost okay with retaining some of the mystery behind The Accident. Even the directors who made films of which I was not a huge fan turned in informative and engaging commentaries, I suppose it's a byproduct of only having to talk for 15-20 minutes. In addition to the commentaries, there is a brief behind the scenes montage with on set footage from all of the shorts. Nothing mind-blowing here, but neat if you're a fan of that sort of thing. I probably won't watch that again, but the commentary is very solid, and I will probably revisit that.

The Theatre Bizarre is not a great anthology, but it is a really good one with some great moments, including Buck's surprise winner. I highly recommend giving this film a shot.

Order The Theatre Bizarre on DVD at Amazon

I loved (LOVED) Douglas Buck's piece. It was haunting and beautiful. Buddy Giovinazzo's was good too but frankly, the less said about the rest, the better.