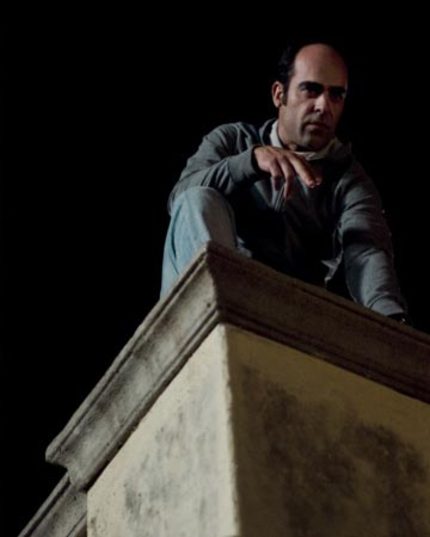 Jaume Balagueró is one of the giants of Spanish fantastic film of the past decade. With 3 solo features and two co-directed ones under his belt, any new film by him is going be watched with a great amount of expectation. Luckily, Mientras Duermes (The official English title is Sleep , but the correct translation is "while you sleep", which to me is far more creepy) lives up to Balaguero's reputation. While his earlier films focused more on family, religion, and strange creatures, his latest introduces the audience to the worst monster: the human one.

When we meet César, he is lying in bed next to a beautiful woman, Clara, contemplating suicide. In the next few minutes, it becomes clear that Clara is unaware of his presence in her bed. Turns out, César is the superintendent of a posh apartment building. Knowing of his stalking behaviour colours his seeming good and friendly behaviour with the various tenants. We see him clean his station, visit his invalid, mute mother in hospital, look after a tenant's dogs. But each of this is tinged with vileness just waiting to be scratched and and discovered. As the days pass, César secretly tortures Clara, who continues to be oblivious to his actions.

Luis Tosar's César is indeed vile, and yet impressive in the execution of his deeds. It becomes almost impossible not to somewhat admire his skill, at the same time as being horrified as to the depths he will sink. Certainly, the psycho obsessed with a beautiful woman whom he both loves and hates is not new to cinema, but between Tosar's performance and Alberto Marini's tight script, the result is one of the most frightening. Having access to Clara's apartment gives him the ability to stalk her in the most intimate ways. Tosar knows how to play this: at one moment, he is longing to be caught; at the next, desperate to escape detection. In one scene, he is particularly verbally cruel to an elderly tenant; none of what he says is untrue, but it takes a cold heart to say it to someone's face with such calm and just the slightest sympathy to make it that much worse.

César lives in the basement of the building, and his power comes from below. Balagueró makes excellent use of levels: César's heart is quite firmly in the depths; Clara is halfway up, as she moves between happiness and despair; and the roof, where César at one moment considers jumping from, offers perspective but no relief. That perspective, however, is not one to make him stop. César is relentless, and Clara, in her ignorance, is powerless. In the end, we all remain in the levels to which either society has designated for us, or to which we refuse to escape. César has no interest in escape, and his torture of Clara never ends. Balagueró frequently moves the camera from Clara´s to César´s levels, from up to down. What makes it more frightening is how much of the action takes place in the day, our knowledge of César makes his deeds in the daytime seem that much more terrifying.

It is not uncommon for film villains to become heroes in their way, and while I doubt that will happen with a character the likes of César, it´s hard not to be impressed, thanks to Tosar´s performance. Mientras Duermes is a great addition to the Balagueró canon.