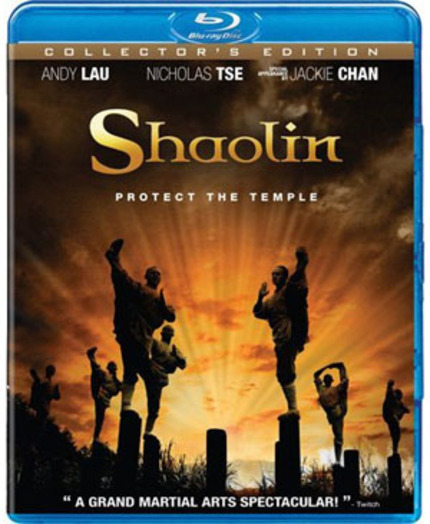 [I previously reviewed Shaolin in the course of reviewing Cine Asia's Blu-ray release.  I'm reprinting the content that applies to the film itself, with new comments at the end, directly reflective of Well Go USA's Blu-ray Collector's Edition]

Director Benny Chan's mainland debut, Shaolin, is a solid wushu film.  If I'm completely honest, and I'd never be anything less, there's really nothing new in this film, but it is stylish, well-paced, filled with engaging performers, and even manages to throw a bit of well-timed humor into the mix without digressing too greatly.  Well Go USA is currently the number one distributor of Asian big name action features in the US, and this release helps cement that position.

In a young Republic of China, where greedy warlords fuel a period of war and strife, Hou Jie (Andy Lau) arrogantly shows no mercy to his enemies seeking refuge with the benign and compassionate Shaolin monks. After unscrupulously killing a wounded enemy, Hou Jie pays a terrible price for his actions and is forced to seek refuge in the same Shaolin Monastery he blatantly disrespected. Hou Jie s traitorous second-in-command Cao Man (Nicholas Tse) continues where the once-warlord left off, betraying his country and his own people. Hou Jie must adapt to Shaolin principles to stop the monster he created.

These days we don't see a whole lot of kung fu ensemble pieces.  There is usually one or two big names on the marquee who run through a shit-ton of hoods on their way to save the princess or whatever.  This time around, we're given a solid cast, some of whom are wushu stars, and some of whom are less known for their action performances and more for their dramatic skills.  Everyone brings their own flavor to the stew, and what comes out it delicious!

The nominal star of Shaolin is Andy Lau, who has some experience in the martial arts, but is really not a kung fu actor.  Lau begins the film as a bloodthirsty general bent on conquest who happens to run into his public enemy number one at the fabled Shaolin Temple. When he shoots him down in front of the monks, they don't flinch. They never flinch. Lau's right hand man, played by Nicolas Tse, is chastised for not being quite as ruthless, and he attempts to rectify that in spectacular fashion, with..  BUM BUM BUM... BETRAYAL!

Yeah, some of the plot is a bit hackneyed, but it is all in the service of some pretty spectacular action.  One of my (and our) favorite performers, Wu Jing (Jacky Wu, of Sha Po Lang, Legendary Assassin, etc...) has a supporting role in the film.  I love Wu Jing, but honestly, I wish they gave him more to do.  He has a few action sequences, but mostly he just chills out and prays. Another supporting role went to none other than Jackie Chan, who plays a chef who couldn't quite commit full time to the Shaolin ideal, but was down enough to hang around and feed the brothers. Chan's appearances in the film are sporadic, but when he does show up, he brings the goods. No matter how inconsistent he gets in his Hollywood films, it seems we can count on him to be the Jackie Chan we love when he's in his element. His sequences are the ones that most stretch the viewers' suspension of disbelief, but all is forgivable given the quality of his performance.

If you know anything about the history of the Shaolin temple, you know that it has been a target of rampaging warlords for centuries.  This film takes a fresh look at one of the many destructions of the Shaolin temple, and does it with style and panache.  Sure, there's a bit more wire work than I'd prefer and it is a bit odd because not everyone was speaking the same language on set and it had to be dubbed into Mandarin, and every Anglo actor in the film is fucking atrocious, but these are not major issues, and anyone familiar with the manner in which kung fu film has been approached on western home video releases has had to deal with much MUCH worse.

Overall, Shaolin is an excellent example of the age old "destruction of the Shaolin Temple" story.  It has earned a place is that canon, and I'm sure I'll reach for it again soon.

Well Go USA's presentation of Shaolin in this collector's edition is quite handsome and packed with extras.  I previously reviewed the UK Cine Asia release, and I must say that on close inspection, Well Go's disc seems to have noticeably better image quality.  The image is marginally sharper, but there was a significant improvement in contrast and color on the US version. The disc looks outstanding.  The sound was more of a wash, with both discs using DTS-HD MA 5.1 audio tracks that support this occasionally bombastic film nicely.

The extras are a bit more of a mixed bag.  Both discs carry over the extras from the HK Blu-ray, including a 2 hour behind the scenes featurette, a 30 minute making-of feature, and a ton of interviews.  The Well Go disc seems to have duplicated all of this material, and so I cannot declare a winner there.  However, the UK disc does have two additional features that I felt were worthwhile, a look at Shaolin style wushu school in the US and Bey Logan's commentary, which are both exclusive to the UK.  A completist would want both sets, but I have to call this one a draw. Well Go USA wins on image quality, and Cine Asia wins on extras.  You decide which is more important.