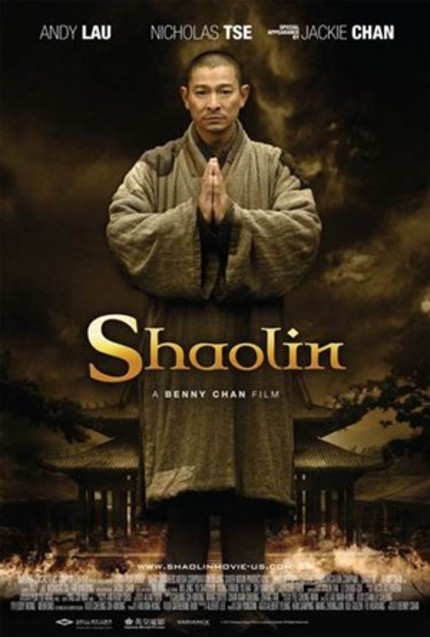 Gotta hand it to Well Go USA. When it comes to bringing the best of Asian action film to US audiences I don't think anybody does it better these days.

The latest picture to get the Well Go treatment is Benny Chan's gorgeous martial arts action picture Shaolin. With an all star cast anchored by Andy Lau, Nicholas Tse, Wu Jing and Jackie Chan this one is a must for martial arts fans and they'll be getting the chance to see it on the big screen when it begins is limited theatrical release on September 9th.

As feuding warlords fight to expand their power, the noble monks of the Shaolin Temple clean up the mess left behind, tending to the injured while trying their best to protect the poor and weak.  General Hou (Andy Lau, WARLORDS, HOUSE OF FLYING DAGGERS) has caused much of this mess with his violent and ruthless tactics that rarely discriminate between soldiers and civilians.

When Hao is betrayed by fellow general Cao Man (Nicholas Tse, THE PROMISE, SHAOLIN SOCCER), he is forced into hiding, and takes refuge with the monks (including Jackie Chan) at their hidden mountain temple.  As the days pass, he finds himself more and more at ease as he learns the ways of peace, and begins to release his hatred through Martial Zen.  But Cao is not far behind, and war soon reaches the temple, where the monks are ready to fight back- with their unstoppable Shaolin Kung Fu.

The original Hong Kong trailers for this one were already impressive but Well Go have just released their own US trailer that's even better. Check it below.