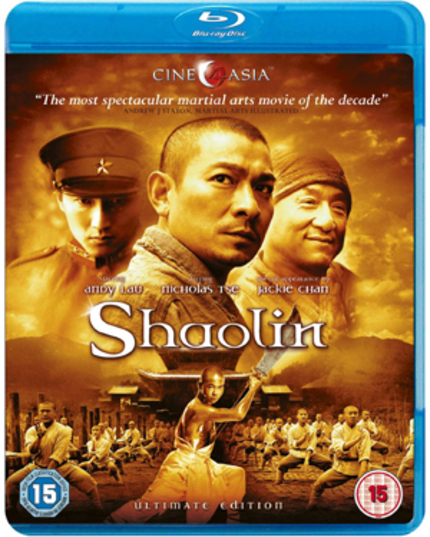 Director Benny Chan's mainland debut is a solid wushu film.  If I'm completely honest, and I'd never be anything less, there's really nothing new in this film, but it is stylish, well-paced, filled with engaging performers, and even manages to throw a bit of well-timed humor into the mix without digressing too greatly.  UK label, Cine Asia, is one of my favorite companies releasing Asian films in the West, and this disc is a great representation of a great film.  You can read my more detailed thoughts below.

China's last imperial Dynasty has fallen and a ruthless warlord (Andy Lau, House of the Flying Daggers) amasses a vast fortune through the violent subjugation of his people. Faced with a brutal betrayal, he runs for his life, seeking redemption in the fabled Shaolin Temple. When his enemies discover his location, he must stand with his new brothers and fight his life's greatest battle...

With breathtaking action from the martial arts director of The Transporter 1&2 and an all-star cast of Kung Fu superstars, Shaolin sets a new benchmark for Asian Action Cinema!

These days we don't see a whole lot of kung fu ensemble pieces.  There is usually one or two big names on the marquee who run through a shit-ton of hoods on their way to save the princess or whatever.  This time around, we're given a solid cast, some of whom are wushu stars, and some of whom are less known for their action performances and more for their dramatic skills.  Everyone brings their own flavor to the stew, and what comes out it delicious!

The nominal star of Shaolin is Andy Lau, who has some experience in the martial arts, but is really not a kung fu actor.  Lau begins the film as a bloodthirsty general bent on conquest who happens to run into his public enemy number one at the fabled Shaolin Temple. When he shoots him down in front of the monks, they don't flinch. They never flinch. Lau's right hand man, played by Nicolas Tse, is chastised for not being quite as ruthless, and he attempts to rectify that in spectacular fashion, with..  BUM BUM BUM... BETRAYAL!

Yeah, some of the plot is a bit hackneyed, but it is all in the service of some pretty spectacular action.  One of my (and our) favorite performers, Wu Jing (Jacky Wu, of Sha Po Lang, Legendary Assassin, etc...) has a supporting role in the film.  I love Wu Jing, but honestly, I wish they gave him more to do.  He has a few action sequences, but mostly he just chills out and prays. Another supporting role went to none other than Jackie Chan, who plays a chef who couldn't quite commit full time to the Shaolin ideal, but was down enough to hang around and feed the brothers. Chan's appearances in the film are sporadic, but when he does show up, he brings the goods. No matter how inconsistent he gets in his Hollywood films, it seems we can count on him to be the Jackie Chan we love when he's in his element. His sequences are the ones that most stretch the viewers' suspension of disbelief, but all is forgivable given the quality of his performance.

If you know anything about the history of the Shaolin temple, you know that it has been a target of rampaging warlords for centuries.  This film takes a fresh look at one of the many destructions of the Shaolin temple, and does it with style and panache.  Sure, there's a bit more wire work than I'd prefer and it is a bit odd because not everyone was speaking the same language on set and it had to be dubbed into Mandarin, and every Anglo actor in the film is fucking atrocious, but these are not major issues, and anyone familiar with the manner in which kung fu film has been approached on western home video releases has had to deal with much MUCH worse.

Overall, Shaolin is an excellent example of the age old "destruction of the Shaolin Temple" story.  It has earned a place is that canon, and I'm sure I'll reach for it again soon.

Cine Asia are really dependable.  When I saw the film theatrically, the image was a bit uneven, not terrible, but just the sort of print damage one comes to expect of a film that is a few months old.  The digital representation of Shaolin from Cine Asia is absolutely gorgeous.  The color palette for much of the film is pretty drab, with Chan opting for the Shaolin temple and monks to be represented by muted colors to reflect their semi-ascetic lifestyle.  However, when the film turns to the more modern military and contemporary characters and action, the colors are much more brilliant, and the textures and details of the military costumes and uniforms come to life.  I found myself appreciating the cinematography more the second time around, thanks to the beautiful transfer.  The audio is also fantastic.  The film is filled with directional action and explosions, and my subwoofer definitely got a workout. I walked out of the room a couple of times, and found myself flinching at some of the surprise attacks when I did.

The extras are extensive.  The majority of the extras are ported over from the Hong Kong Blu-ray release, and all are fairly typical and cover a lot of ground.  There is a making of doc, there is behind the scenes footage, and there are interviews, most of this stuff is pretty standard EPK stuff.  The real meat of the extras comes in the exclusive stuff.  Cine Asia has a feature length commentary from Bey Logan and, like him or not, the guy knows his shit.  It is fun and informative, and since I'd seen the film before watching the Blu-ray, I found myself engaged with the commentary for long stretches.  There is also a 40 minute featurette about a real wushu school in the US that is pretty interesting.  It almost works as a commercial for wushu training, but really, what is not to like?  The participants are all truly excited about their work and training, and really enjoy what they are doing, and there is nothing more exciting to watch than enthusiasm.  The extras go on and on, and it took a couple of hours to pore through the whole thing.  As usual, Cine Asia have gone the extra mile, and made their version of Shaolin a must buy. Highly recommended!

In the interest of full disclosure, this film has been cut by seven seconds by the BBFC for horse falls.  I don't know what HK/Chinese film companies have against horses, but this film has some of the nastiest horse falls I've ever seen.  At one point in the uncut version, a horse is tripped down a flight of stairs.  In this particular case, the cuts don't bother me.  It was painful to watch some of the horse stunts in this film, and I hope this is a practice that HK/Chinese filmmakers will discontinue in the future, though I doubt it, as it is exciting on screen.

Order Shaolin on Blu-ray at Amazon