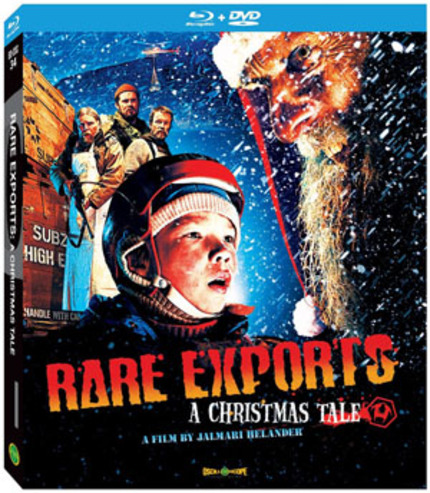 Rare Exports is the kind of film that grabs you by the shoulders and shakes you, saying "THIS IS WHAT FUN MOVIES LOOK LIKE!" This summer, we tried it here in the States with Super 8, which was mostly a success, but was more serious than fun. This Finnish feature about the real Santa Claus and his origins is dangerous, fun, and ridiculous, all while being engaging with solid, well-rounded characters. This is a lot to accomplish for a film that only lasts eighty-two mintutes, but director Jalmari Helander is up to the task, and the film is a rousing success.  Rare Exports acquisition and distribution by Oscilloscope Labs is a boon to both parties.  The film gets a wonderful Blu-ray/DVD combo release, and Oscilloscope gets another feather in its cap, we all win.

Young Pietari lives with his stern reindeer-herding father Rauno in arctic Finland. On the eve of Christmas, an enormous excavation at a nearby mountain disturbs the locals and captures Pietari's curiosity. When Rauno's raindeer herd is mysteriously slain and the children in town go missing, Pietari realizes that the dig has unearthed the evil Santa Claus of local lore--who no one wants coming to town. Pietari's father rounds up a posse and captures the nightmarish creature in an attempt to sell him to the misguided leader sponsoring the dig. But Santa's freakish elves will stop at nothing to free their fearless leader, and what ensues is a fantastically bizarre holiday adventure testing the bond of father and son and pitting man against mythology.

Rare Exports: A Christmas Tale is a wildly original re-imagining of the most classic of all childhood fantasies and a darkly comic gem destined for perennial holiday viewing.

This is one of those films that ScreenAnarchy has really taken under its wing, as much as we can, to encourage people to seek it out.  As such there are already no less than four reviews in our archives, and rather than add to that chorus of well-articulated opinion, I'm going to gather some highlights from our previous reviews to give you an idea of what you're in for.

A Christmas story for people who hate Christmas stories, Rare Exports mostly succeeds at reaching its goals. The character work in the early going feels more than a little perfunctory in places, the film not really spending much time allowing us to get to know and care about these characters, but once it gets into the core of the concept and the story it really begins to sing. That it's a very silly premise is undeniable but Helander and company play it deliciously straight, almost epically so, avoiding the nodding and winking to the audience that would have let the audience off the hook and instead keeping us in the moment with our young hero. It takes great advantage of the fact that skinny, naked old men are inherently creepy - particularly when covered with blood - as it continually pushes its premise right out to the outer limits of what it can bear without cracking.

Though somewhat limited in story and character work Rare Exports is executed with such audacious style and with such a big vision that it's impossible to watch without a big grin spreading across your face. Is Helander the next Joe Dante? No, not yet, but he probably will be soon.

Never before has a film that is sort of aimed at young adults featured so much full frontal male nudity. But don't let that discourage you from seeing this. This is a film that invokes the spirit of Joe Dante in his 80's prime, Richard Donner's The Goonies and Fred Dekker's The Monster Squad. A fantasy film that features kids in the main roles but isn't really aimed at them as an audience. This is dark stuff but doesn't tread over to the horror area fully, just dances around it gladly.  Director Jalmari has visual chops in spades, capturing the magnificent but cold and harsh environment of Northern Lapland with beautiful compositions and makes the film look massive. The cast all do a good job with their roles and the film rests almost completely on Onni Tommila's shoulders and he carries it with gusto. Supporting cast is lively and the army of old naked men running through the snow is a sight to behold. I'm fairly certain that the film will become a repeated viewing at many households during Christmas, along with A Christmas Story, Christmas Vacation and Die Hard.

Rare Exports is still far above what anyone might expect from a film born of a one-note joke for the internet generation (Snakes On A Plane? Fred: The Movie?). It's daft and childish, yes, but also genuinely funny, slyly subversive and often wonderfully, thrillingly cinematic. The climactic setpiece is still one of the highlights of the year, disappointing or otherwise, and the blackly comic epilogue (which gives the film its title) is a beautifully snide little coda. For anyone who shudders with distaste once your neighbours start putting the lights around their Christmas tree, or even just those who fancy a scary story in the classic campfire tradition, Jalmari Helander's movie comes strongly recommended.

Played straight, it's an amusing and witty take on traditional Christmas tales with a creeping sense of off-kilter menace from the outset, where one of the scientists is pestered like a child; "have you washed behind your ears?!" Indeed the interplay between adults and children is one of the most attractive aspects of the film. It lays out the time-honoured tradition of parents withholding information from their kids, only for the kids to prove themselves more than a match for the oldies when it comes to dealing with their foe... Without getting into a debate about classification, it seems that Helander's film will be beyond reach for many older kids who'd relish it. Of course it's an arty, subtitled and dark fairy-tale that has huge adult appeal too, but it's hardly a psycho-Santa-on-the-rampage movie either.

At 82 minutes, it's one of the few films I wished was longer, which is no bad thing. Pacing quibbles aside it's an imaginative and unique Christmas flick, the likes of which I wish we saw more often.

Rarely do we all agree like that.  I can't say it much better.  Rare Exports is worth your time.

This is my very first Oscilloscope Labs review, and I must say that even before I popped the disc in I was very impressed. Rare Exports is housed in a very cool digipack, with lovely fold out art. Very nice.  However, once I put the Blu-ray in to screen it, I was an instant convert.  This disc looks astoundingly good, its image is reference quality.  Details are sharp, colors are bright, and it looks absolutely wonderful in motion.  The audio is no less awesome, with a robust DTS-HD MA 5.1 audio track that will test your system at times, but manages to balance the bombastic explosions and other effects with the dialogue very well.  A superb release!

The fun doesn't end there, though, there are piles of interesting extras to sift through.  First up are the initial Rare Exports short films that went viral on YouTube back in 2003 and 2005.  The film very much captures the spirit of these earlier works, and it is fun to see from where the idea evolved. There is also a 30 minute making of featurette, this mostly consists of raw behind the scenes material, with the odd on-set interview. There is a gallery of production art, used as both inspiration for the production and as marketing material when the team was looking for funding.  There are also a couple of animatic/live action comparison videos, for the folks who like that kind of stuff. The penultimate extra is the original Finnish theatrical trailer, which captures the mood of the film quite accurately. The disc finishes off with an entire bonus film, the 1964 cult Christmas hit made popular by MST3K, Santa Claus Conquers the Martians.  The movie is bananas and is the kind of low budget sci-fi goof that you don't see anymore, thanks to the ready availability of cheap CG.  Santa Claus Conquers the Martians appears here in SD and in a VERY beat up looking print with TERRIBLE colors, but hey, what do you want? You've got Santa, you've got Martians, you should be happy!

Oscilloscope Labs ALL REGION Blu-ray of Rare Exports is outstanding, and the kind of release every great film deserves.  Highly recommended!