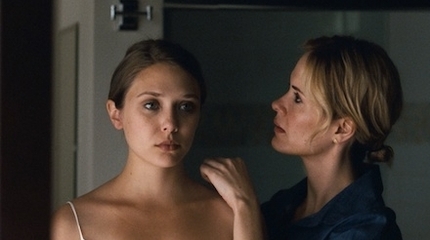 While cults and communes are not the exclusive domain of the United States, ones located within its borders are great fodder for artistic exploration. In the case of ones that abuse residents either physically or psychologically or both, we are fascinated by both their leaders and their followers. What makes someone fall under the sway of such charisma and (seemingly to us) obvious manipulation? And what happens when (and even if) you escape? Director and screenwriter Sean Durkin explores the trauma on one such commune survivor in his new film Martha Marcy May Marlene, a haunting and disturbing story that leaves you questioning your own values and vulnerability.

The film begins with a young girl, Martha (Elizabeth Olsen), escaping what appears to be a cult. She calls her estranged sister Lucy (Sarah Paulson), who takes her into her home, where she and her husband Ted attempt to help Martha, though ignorant of what has happened to her. While Martha unsuccessfully attempts to adjust to life on the outside, the film flashes back to her time at the commune. Its leader, Patrick (the always incredible John Hawkes) disarms her and rapes her, and gradually Martha is pulled further into this trap until an incident finally makes her question Patrick. Meanwhile, she cannot escape some of the behaviour of which she is accustomed, and her sister is powerless to help.

The title indicates towards questions of identity. Martha is her given name, but she is called Marcy, and then Marcy May, at the commune. Clothes and men are shared, as if all are one, at least among the women (this is not a religious cult, but definitely a patriarchal one.) Martha, it is suggested, was always a lost child, and possibly abused, leading to a sinking of her personality. She barely speaks, either with her sister or at the commune. It seems she has always been this way, and the sisters' strained relationship reveals some hard truths about family. Just because you are related to someone, doesn't mean you can relate to them, and while their is love, a lack of understanding leads to confusion on the point of collapse. Martha cannot understand why swimming naked should be such a problem, or why two people should live in such a large house; while these values are left from her commune years, she matter-of-fact delivery does make the audience question their own conceptions of what a 'proper' life means.

Martha's personality submersion at first is a little annoying (as much to the audience as it is to Lucy), but as the film moves, the audience moves with her. The camera acts as the conscience of those who have hurt Martha, and those who have let her down. At one moment Martha is aware of this, and remains silent and almost completely devoid of life; at others her trauma can either seep through her skin or explode in a rage, and it is at these moments that the film reaches its greatest power.  This is in no small part also due to the performance of Olsen, who hits right on Martha's childhood pain and the lack of concern she had for herself that led to her conversion into the cult, and the pain that motivated her escape.

While not necessarily original in concept, the film is original in its execution. By moving back and forth between the time lines, Durkin places the audience in the role of psychiatrist, attempting to unpack Martha's trauma, at times wanting to yell at the screen to tell Martha to escape, and at others speechless both by her lack of understanding of social "norms" and the depths to which some men will go to control other human beings. Durkin neither forces the audience to completely sympathize with Martha, nor does it allow us to shy away from the slow penetration of her soul that occured and the damage that will likely never leave.