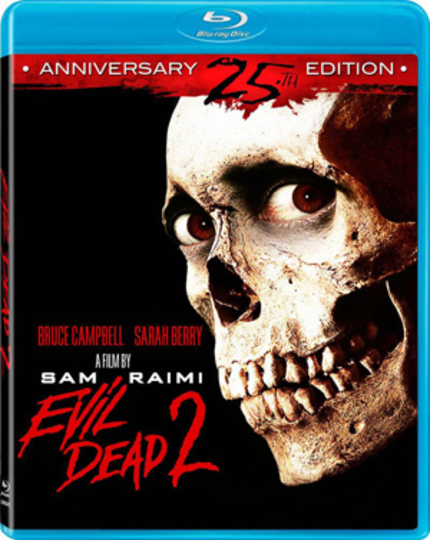 In the last few months Lionsgate Home Entertainment been announcing a lot of genre titles and modern classics on Blu-ray, and this might be the most exciting for me.  Evil Dead II is now officially scheduled for November 15th.  This film is already on Blu-ray, but Anchor Bay's version left a lot to be desired.  It was one of their first Blu-ray releases and came out back when people didn't really know what they should expect from the format.  As a result, it looks like crap.  Lionsgate are apparently aware of the dissatisfaction with that product and have a new transfer and new bonus features on their new set.  One of the saving graces of the original Blu was the wealth of bonus material that Anchor Bay had amassed in their milking of this title over the last 15 years, but fear not, Lionsgate are apparently bringing a lot of that archival material into this release as well.  Hopefully this means I can dump the Anchor Bay without missing a beat.  Here are the details:

From horror master Sam Raimi (Drag Me to Hell) and starring the effervescent Bruce Campbell (Army of Darkness), Evil Dead II gets the deluxe Blu-ray treatment this November from Lionsgate. Ranked #19 in Entertainment Weekly's "Top 50 Cult Films" list, Evil Dead II has been hailed as "one of the most visually inventive, relentless and truly original films ever made" (BBC). The Evil Dead II: 25th Anniversary Edition Blu-ray is packed with all-new special features that revisit every aspect of the film's shoot with over 20 cast and crew members, plus tons of existing content and a thrilling new High-Definition 1080P transfer.

The lone survivor after an attack of flesh-eating spirits, Ash (Campbell) retreats to the woods with his girlfriend, Linda (Denise Bixler, Crisis in the Kremlin). There, Ash plays her a recording of a professor's readings from the Book of the Dead. The spell unleashes an evil force to take over Linda's body and turns her into a monstrous Deadite, threatening to do the same to Ash. When the professor's daughter and her friends arrive, the evening unravels into a gory and comic battle with a chainsaw, a shotgun and a flying eyeball.

Also coming this Fall is the latest Sushi Typhoon title, Helldriver, to Blu-ray courtesy of Bounty Films.  I'm less enthusiastic about this film, but certainly willing to give it another shot.  I saw it under less than ideal circumstances, so my opinion may have been swayed.  Hey, at least it has a neat green case! 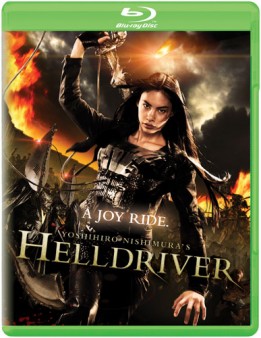 The absolutely insane Yoshihiro Nishimura, director of Tokyo Gore Police and the amazing Vampire Girl Vs. Frankenstein Girl, is back with another foray into disturbing wonder with the Japanese zombie movie Helldriver.

An alien-spawned, mysterious mist blankets the northern half of Japan, transforming those who inhale it into ravenous, flesh-eating zombies.

Plunged into chaos, Japan is torn in two: the southern half of the country, where the populace remains untouched by the deadly gas, lives behind a heavily-fortified wall, while the northern half is a lawless, zombie-infected wasteland.

Hope arrives in the form of Kika (Yumiko Hara), a beautiful high school girl armed with a chainsaw sword powered by an artificial heart. Recruited by the government, Kika leads a ragtag group of desperados on a secret mission into the zombie-infected wilds to exterminate zombie queen Rikka (Eihi Shiina from Audition, Tokyo Gore Police) and put an end to the plague of the living dead. But the road is fraught with a thriving zombie population that refuses to lay down and die!

Helldriver is released in the UK on DVD & Blu-ray on 31st October 2011 by Bounty Films.