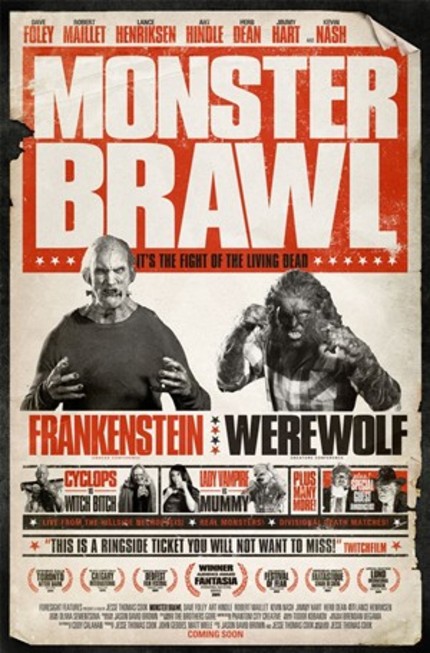 Toronto, ON - Anchor Bay Entertainment Canada is thrilled to announce that Foresight Features has appointed the company service agent for two of their great new genre films in the Canadian home entertainment market.  'I am thrilled to be working with the Foresight team on Monster Brawl and Exit Humanity. We were all immediately struck by the potential of both projects very early on,' says Rob Herholz, General Manager, Anchor Bay Entertainment Canada. "Foresight Features is trying to do bigger things on smaller budgets and plan on producing two high-quality original genre features each year - we believe we've done that with Monster Brawl and Exit Humanity in year one," Matt Wiele, Producer with Foresight Features explains.

Set in the tradition of a Pay-Per-View main event, comes Monster Brawl, a grotesque and hilarious fight to the death featuring a cast of eight classic combatants in all. Along with their colorful managers, these Monsters compete in visceral bloody combat in the ring to determine the most powerful monster of all time. Monster Brawl stars comedian Dave Foley ('Kids in the Hall', Bugs Life, Despicable Me), wrestling icons Jimmy Hart - The Mouth of the South, Kevin Nash, revered MMA referee Herb Dean, Robert Maillet (300, Sherlock Holmes), Art Hindle (Porky's, Black Christmas) and the voice of horror legend and Call of Duty narrator Lance Henriksen (Aliens, Terminator).

"Anchor Bay Canada is light years ahead of the pack in terms of discovering and supporting the rising wave of young Canadian genre filmmakers, and we are absolutely thrilled that they have acquired Monster Brawl. We've grown up on Anchor Bay titles and the film joins a roster of awesome and iconic horror films." Jesse T. Cook, Director.

Monster Brawl celebrated its World Premiere at the 2011 Fantasia Film Festival with an audience award, and has been selected as the Opening Gala Film at the Toronto After Dark Film Festival. 'This is a ringside ticket you will not want to miss!' lauds ScreenAnarchy.com

How does a man deal with the loss of everything meaningful in his life, and the loss of mankind's humanity amongst chaos and despair? Set in 1870's Tennessee, Exit Humanity is the legend of Edward Young's horrific and dramatic journey through an unexplainable outbreak of the walking dead to lay to rest the most important thing in his life, his son's ashes. The bleak post-Civil War era backdrop highlights the severe divide that the United States was facing, and the true loss of hope that so many felt during this period in history. The film boasts strong performances from a stellar cast that includes Brian Cox, Dee Wallace, Bill Moseley, Stephen McHattie, and introduces Mark Gibson.

"Exit Humanity is a period zombie tale about a dark and dramatic journey of hope and survival in a world of darkness. It's the movie I have always dreamed of making and I could not have imagined a better cast that fashions this film into an epic fantasy," says Director John Geddes. To date, Exit Humanity has also been selected to screen at the Toronto After Dark Film Festival, as well as Sweden's Lund International Fantastic Film Festival.