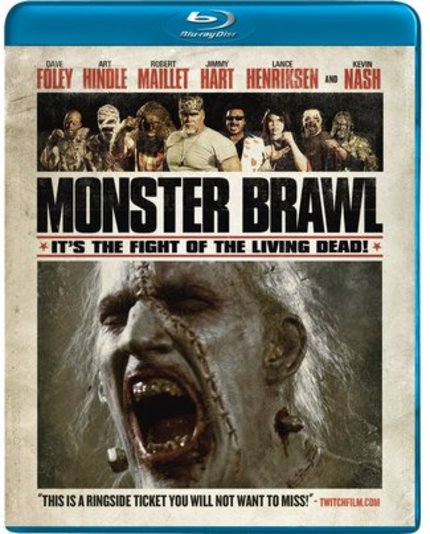 It's every twisted little child's fantasy, isn't it? To pit the world's great monsters against one another in a battle to the death? Well, while the rest of us jack-offs were thinking about it, Jesse Thomas Cook went and made a movie about it. Monster Brawl is that movie. The question now becomes, is the movie any good, and my answer is a resounding, "well, sort of..."

There is no plot to speak of in the film, it is literally an elimination style wrestling tournament featuring monsters. Among the combatants are The Werewolf, Frankenstein's Monster, Zombie Man, The Mummy, Lady Vampire, Cyclops, Swamp Gut (Swamp Thing/Man-Thing), and the painfully named Witch Bitch. They are divided into categories by type of monster and weight class, and they fight. They are cheered along by the ringside announcing duo of Buzz Chambers (Dave Foley), and Sasquatch Sid (Art Hindle), they are joined by legendary hype man Jimmy "The Mouth of the South" Hart. Then, they get called into the ring, two by two, and fight to the death. Simple.

The problem with Monster Brawl is that it is too simple. Prior to each match-up, we are given a 3-5 minute background piece on each monster that explains who they are and gives some semblance of motivation to their decision to fight, but it was pretty weak. Maybe it's because I watched this alone, maybe it's because I wasn't drunk at all, but I found the bulk of the film to be simply boring. Honestly, I wanted more back story, because once the fighting started, it was pretty tame and I wished I at least had some kind of attachment to the characters beyond, "ooh, I've always loved zombies!" Unfortunately it wasn't there. I suspect that a rowdy drunken crowd might have made this more fun, and perhaps it was the lack of an on screen crowd that was the main problem (the wrestling ring is in an abandoned cemetery with no spectators), as it made the event feel even more dead than it's competitors.

I hate to pick on this film, though, because the idea is just so much fun. The concept of a wrestling tournament featuring my favorite monsters is a great one, and probably something that I'd pay top dollar to see with a drunken rowdy crowd as part of a live event, but on screen with no ambient crowd atmosphere, it falls flat. I can imagine this having been fun at midnight festival screenings, but it loses all of its flavor at home by yourself.

Monster Brawl comes to Blu-ray from Image Entertainment, who've put together a very nice presentation of this film. The image, coming from a digital source, is spotless and looks very nice. The audio is equally clean, and the DTS-HD MA 5.1 track packs the occasional punch, though there isn't the kind of zippy action in the film that will test yours home theater.

The extras on the disc are pretty good, and kind of make me feel even worse for not liking the film very much. There is a behind the scenes featurette that shows just how much blood, sweat, and tears went into this tiny production. It looks really good in spite of its budget, and the team working on the film really cared about their end product, and that it admirable. The audio commentary from director Jesse Thomas Cook and his producers confirms this, as he gives us the lowdown on the behind the scenes action. There is also an outtake reel of Jimmy Hart trying out different lines for each monster that is kind of fun.

I really, sincerely wish that I liked this film more, but it was sort of a bummer to me. I appreciate the effort guys, and if you decide to take your show on the road, I'll be the first in line!