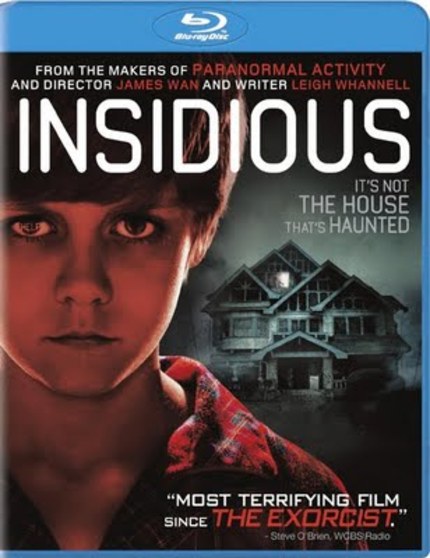 I've seen this film twice now. The things that annoyed me the first time annoyed me much less the second and everything I liked about the film had the same effect. Plus the pleasure of watching it with first timers was palpable. Insidious offers old fashioned scare tactics that work very well, especially if you haven't seen Poltergeist, though the overall effect is less haunting than a truly great horror film should be. Small complaints. Director James Wan and writer/actor Leigh Whannell have a knack for creating atmosphere. The seance sequences here are among the best in recent memory. The creature work too, especially of the main demon, makes for some solidly disturbing encounters. Lin Shaye, Patrick Wilson and the rest of the cast do a great job with a middling script that borrows characters from Poltergeist, and twists on itself too many times as it touches on conventions of possession, haunted houses, and the monster movie.

The extras here are scant comprised as they are of three short featurettes. But they are reasonably interesting. Horror 101: The Exclusive Seminar is forgettable offering bullet points on horror movie mechanics. But On Set with Insidious and Insidious Entities both offer interesting insights to the world of filmmaking and the world the film is set in.