ATTACK THE BLOCK See this now. 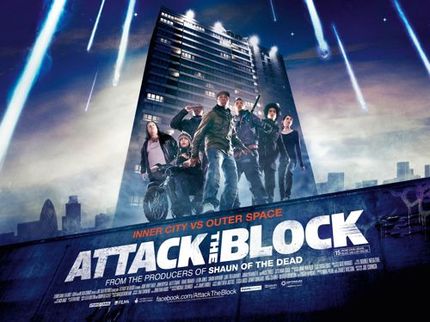 See this now. Cowboys and Aliens can wait. Attack the Block is opening in seven measly cities around the country and it needs wider release. Attack the Block should be seen by anyone who has ever been a kid, ever dreamed of fighting aliens and ever wondered if they had a hero lurking inside. More importantly director Joe Cornish needs to make more movies. Genre thrills, outlandish humor and social awareness make this one of my favorite movies of the year. I'm betting it will be one of yours too.

The setting is the inner city of London. In the states we call the downscale housing developments the projects, in London they're called the estates. In one such estate lives Moses, a young man caught up in a lifestyle of petty crime. Together with his younger friends, he mugs, thugs and drugs his way through the nights only on this night he's about to meet something even meaner; jet black aliens with huge green glow-in-the-dark teeth, dropping like meteors from the sky. Soon the boys find themselves defending their block against the beasts using anything and everything they can get their delinquent little hands on, all while trying to evade a very angry drug lord, and the police.

In the Q and A that followed my screening Cornish got into the obvious influence of films like Goonies, Explorers, Critters and other practical effects heavy 80's monster cinema. The creatures here are curiously dynamic. It is really hard to tell where (if anywhere) CGI played a part in this film, and the creature performances are spot on. See Super 8 yet? This has the same level of heart and the same love of the genre film. But Cornish also shared the story of being mugged by a group of youths similar to the ones in the movie. It wasn't a very dramatic encounter, he said, but it did lead him to research causes. This was a point in the interview where you sensed a very deep empathy in Cornish. He got it. These kids weren't raised in a vacuum. Too many kids aren't raised at all. Cornish saw his role as a storyteller as one that embraced these kids at the point of their deepest need; to be embraced as individuals without being made to feel like a "them" or a number. The heart of Attack the Block is exactly that. It's a fairly modest goal  that many of the movies Cornish was inspired by here met as well. But here it's fleshed out with very, very good, very compelling moments of decision, revelations about origins and an unstinting sense that just as society provides little in the way of actual help to many kids like these, that it is somehow still worth it for those same kids to embrace change, growth, and hope for their future.

John Boyega offers a dynamic and heartfelt big screen debut here as Moses, the young would-be thug forced to choose between destinies. But these young performers are all very strong. Alex Esmail very nearly steals the show as the wise cracking shameless con-boy Pest and a pair of super young would be criminals calling themselves Probs and Mayhem light the screen up every time they walk into the frame.

Cornish has the guts to make his younger characters seem quite real here. These are street kids, with street mouths, nasty habits and a fierce devotion to one another and the area they call home. We start by despising them and come to see them as people through a process that seems wholly organic even if their situation is fantastic. It makes for strong stuff later when we are asked to actively cheer them on.

Besides doing all the things that their real-life counterparts would do these kids also die . Cornish isn't afraid of onscreen carnage and, again, it really serves the story here. These are kids surviving against the odds on the best of days.

Nick Frost makes the most of his role as Ron, a drug drone who just wants to get high and be left alone and Jodie Whitaker (Venus [2006], Good [2008], Perrier's Bounty [2009]) takes the solid dialogue straight to the heart with her characterization of a mugging victim forced into an uneasy alliance with her enemy.

Attack The Block won't have the biggest box office receipts this weekend. In fact it will probably end up, like it's characters, noticed only as a small bit of text in the paper, or a line of text in a multiplex website ticket page. But do yourself a favor and go see this funny, warmhearted occasionally scary throwback. The world needs Joe Cornish to keep making movies.