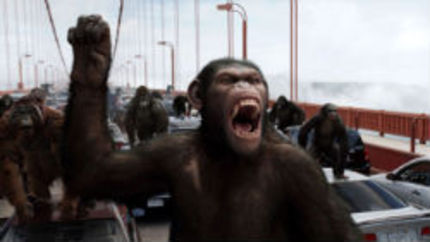 We've displayed an unabashed love for Joe Cornish's Attack the Block since it debuted at SXSW in March, and I'm fully on board with calling it one of the most enjoyable films of the year. It's expanding into six more cities in the U.S. today, and will be opening in Finland next week, with Germany and Singapore theatrical engagements following in late August.

While Attack the Block has not blossomed into a big box office success -- the returns so far total less than $5 million worldwide, against a reported production budget of $13 million -- it's destined to become a cult favorite on home video, where it's likely to recoup its expenses and reap a modest profit. I say that with confidence because word of mouth has been almost uniformly positive.

The complaints generally fall into the categories of "Not as good as I'd hoped it would be," and / or "You guys over-hyped it," and there's nothing to be done about raised expectations. The flip side for those who are among the first to see a movie that they end up loving is to remain silent, or to express concise, restrained praise: "Oh, it's alright if you like that sort of thing." And then no one at all goes to see it, and then people discover it eventually on home video, and complain: "Why didn't anyone tell me about this movie so I could have seen it on the big screen? What's wrong with you guys?"

The flip side to that flip side comes with big-budget movies, with gigantic marketing budgets that dwarf the production budget of 8 or 9 movies the size of Attack the Block (or Another Earth, another smart, low-budget movie with a science-fiction premise).

In recent, succeeding weeks, Cowboys & Aliens and Rise of the Planet of the Apes opened to dramatically different returns. The former earned $36.4 million, while the latter cruised to $54 million in its debut weekend. In the weeks since, Cowboys & Aliens, with a reported $163 million budget, has managed $94 million in global receipts; Rise has taken in more than $211 million worldwide and is still going strong.

For wide openings, the goal is awareness, and U.S. airwaves were drenched with advertisements for Cowboys & Aliens and Rise. The concepts seemed easy to communicate; this is one case where the title said all you needed to say about the movie to generate interest. For whatever reason, however, moviegoers decided they had little interest in seeing a movie with James Bond and Indiana Jones as cowboys fighting aliens, yet were eager to see a new ape adventure.

Meredith Borders at Badass Digest thinks Rise is a hit because "Caesar fights for freedom, the simple freedom to live his life as he chooses. In a global environment of growing discontent, is it any wonder that this film resonated with audiences?" Taking that out of context simplifies her argument, perhaps unfairly, and her article is definitely worth reading in its entirety.

But none of that 'fighting for freedom' stuff came through in the trailers, and the trailers are what, ultimately, drew people into theaters. It wasn't the hype -- which, as Ms. Borders points out, was generally lousy -- nor was it the critics, as flattering as it might be to dream that critics hold any sway over movies marketing to the masses. (Case cited and argument closed with Transformers: Dark of the Moon.) Sometimes, people just want to watch giant robots beating the crap out of each other, and, sometimes, people just want to watch angry apes beating the crap out of people.

And sometimes they don't want to watch James Bond pretending to be a cowboy and Indiana Jones pretending (briefly) to be a bad guy. Six months ago, Cowboys & Aliens seemed more likely to be a hit; after all, what could be cooler than the Old West meets Outer Space? It turns out, Inner City meeting Outer Space in Attack the Block proved to be much, much cooler (and more accomplished), even on a much smaller budget.

In the long run, after all the hype has died, Cowboys & Aliens will be remembered as a disappointment, Rise of the Planet of the Apes as a surprising mainstream pleasure, and Attack the Block as a great big slab of horror, science fiction, comedy, thrills, and chills, distilled into 88 minutes of pure joy.

Visit the Attack the Block official site for U.S. theaters and showtimes.