A SHORT INTERVIEW WITH A LONGBOTTOM: Matthew Lewis of the Potter Franchise 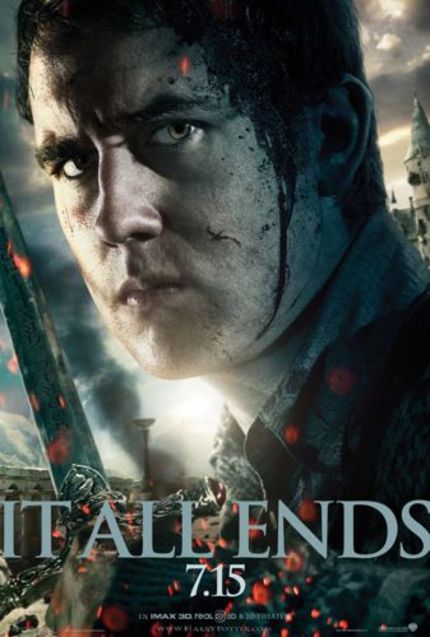 A chance to talk to Matthew Lewis aka Neville Longbottom was a chance to talk to cultural royalty. Through the course  of eight film he's grown up in front of us emerging as the unlikeliest of heroes in the worlds most well managed movie franchise. The guy I met was down to earth, a little tired and as humble as Neville ever was. He's also looking forward to a little football.

DAVE: Being part of the Potter franchise has afforded you the opportunity to be exposed to things most geeks can only dream of? How have you taken advantage of that?

MATTHEW: I have little bits and bobs I've collected. I've got a Star Trek communications badge from when I visited the set and I've always been a bit of geek about that kind of stuff. Love Star Wars and Trek etc. But I'm a bigger sports and music nut. I collect tickets and programs. I've got them by the hundreds in my house.

DAVE: Do you worry about going back home? I mean, what now?

MATTHEW: It has been terribly disorienting. The last two weeks have been very, very overwhelming. We started this promotional tour on the fourth of July and...let's see.... what day is it today?

MATTHEW: Oh no, release day! [laughter] I'm so embarrassed. Oh well it's just another surreal day in this thing. part of it is the universally positive reaction. I love meeting people, and traveling, but Neville seems to have really struck a chord, especially for kids who feel like they're different or don't fit in. I'm so honored to share that people.

At the same time I'm so looking forward to going home. I come from Leeds, in the North of England and just hiding away for a bit. I'm not scared of that at all.

DAVE: Are you going to miss being in the center of Geekopolis as far as all the schwag and set visits etc.?

MATTHEW: I've discovered that you take that with you, it's in you. I remember reading the Harry Potter books back home. I come from a tiny little mining town and these books, they were just sheer wondrous escapism in the best sense. I used to run around dressed as Harry and cast spells long before I ever imagined being part of the movies. No matter how boring school was I could always attend Hogwarts. To me Diagon Alley might really have been on the other side of my bedroom wall.

DAVE: I interviewed the voice of Bambi, Donnie Dunagan, recently and over the years I've talked to a lot of actors who became identified with a single role. Are you up for being Neville when you're sixty?

MATTHEW: As an actor at this point I'm moving away in my head from the character of Neville but as a fan I can't imagine not wanting to revisit the Potter-verse. Right now is a really exciting time. For the first time in ten years I literally have no idea what is next. I don't know where I'll be in twelve months let alone thirty years. If, when I'm fifty or sixty I'm still being known as Neville that's hardly the end of the world is it? There are far worse things I could be known for than being part of this amazing series of films.

DAVE: Does all this hoopla force you to hang onto the character longer than you want?

MATTHEW: I love Neville, he's been a fantastic character. It's funny, maybe doing theater has mellowed me. A few years ago I would have complained and said that I was sick of Neville and need to move away from it. Of course real life catches up with as you mature and you learn to slow down and appreciate it. I certainly have nothing to complain about. What an amazing experience I've had!

I have my whole life to carry on as well. I'd love to keep acting, I'd also love to do some other things. It's odd but I've been acting since I was five so to me, in many ways, Harry Potter is just a part of something bigger called my life.

DAVE: I'v got to ask this even though I wouldn't normally. I think the perception is that this must have set you up for life financially. Is that the case?

MATTHEW: I don't have to worry at this point but I'm far from set for life. I still see myself very much as a jobbing actor anyway. I want to work. This does give me leeway to experiment in terms of time. That's nice. I have a tiny bit more control. But no, I not rich enough to turn my nose up and retire. Part of experimenting has been doing theater. Alan Rickman encouraged me to do that. It throws you into something immediate, new. If you make yourself available to it you learn all these things about yourself and life as well as get to stretch yourself as an actor.

DAVE: What sort of life's lessons did Potter offer?

MATTHEW: Nothing to harsh, or tough. A big one is to make sure you take all the praise with a pinch of salt. It is wonderful to hear people praise you but that's one reason I still live in Leeds and have the same friends I did before Potter sort of took over. I can go back to Yorkshire and no one cares, they're just glad to see me. Sean Bean is from my hometown as well and he's talked about that. Where I live is pretty gritty, down to earth.

You have to be prepared. You never know how this industry is going to work out. My brother is an actor and he was on a big UK soap opera for awhile. he got to be pretty famous. That ended. He's coming back from a couple of years of hard lean times, no work coming thru etc. That was hard for me to watch him go thru. He's a bloody good actor but he's had to struggle. As long as I can remember how tough it can get I'll be alright I think.

DAVE: At what point does acting become something that feeds your soul instead of just helping you make a living?

MATTHEW: Acting means the child in me never has to grow up. That's such a wonderful thing. I can be an astronaut one day, a soldier the next. I can try all those dreams on like playing dress up. If I didn't enjoy it I wouldn't do it. That is something I think is hard for fans to understand sometimes. If I didn't enjoy this so much I wouldn't be able to make Neville or any other character come alive. So as much as it is wonderful to share what I do with others, ultimately I have to be the one to own it, believe in it, otherwise it's just a product to sell instead of something alive in me.

DAVE: Now that Potter is behind you and your fans are growing up have you considered any particular kind of projects you'd like to work on? What about horror for instance?

MATTHEW: Oh I like all kinds of films. I was offered a part in an indie horror that looked really good but we couldn't work the schedule out. I'd especially like to do something really scary. I saw REC recently and absolutely loved it. I'd love to work with Guillermo del Toro.

DAVE: So nothing firm waiting at this point?

MATTHEW: Oh I've got some scripts upstairs actually that I'm supposed to be reading and a couple of meetings I need to schedule as soon as I get back but nothing that I'm 100% lined up for. I am lined up for football season though. My time off is going to start right at the beginning of it eh! Brilliant. I can't wait. I only got to attend four games last year.

DAVE: Last question. Were you surprised that Neville grew into the kind of character that we see saving the day in this movie?

MATTHEW: I think the wonder of what J.K. Rowling did i she took a bumbling sad little boy that no one thought would amount to anything and imbued him with nobility. Neville is befuddled but he wants to do the right thing, and he does do the right thing. Playing that was a joy. He's not some Rambo-esque shirtless guy with a red bandana around his head he's just another reluctant hero, another decent person who matters.

Thanks for reading gang. The video blow has nothing to do with Neville in particular but it did make me laugh pretty hard in spots.

More about Harry Potter and the Deathly Hallows Part 2