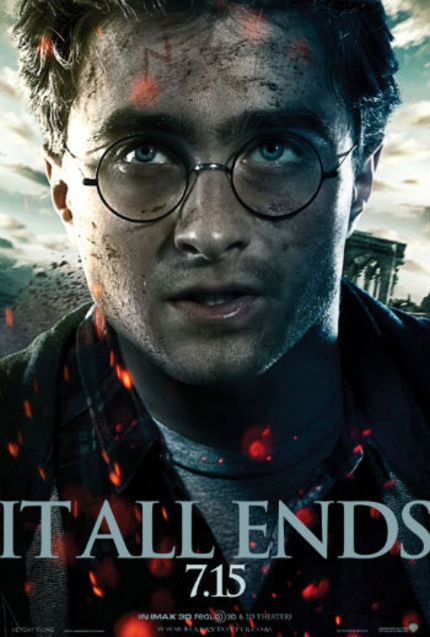 You're in or you're out. And in an age in which film franchises are constantly rebooting, and the origins of superheroes are endlessly explored, the intransigence of this particular series is refreshing.

As with its immediate predecessors, Harry Potter and the Deathly Hallows Part 2 makes no pretense at being welcoming to new viewers. Really, with that title, why should it? Anyone who attends the last installment of an 8-film series -- especially one titled Part 2 -- and expects it to hold their hand and explain the whys and wherefores will be thoroughly perplexed. It is definitely not a stand-alone film.

Speaking as someone who has seen the previous seven films, without having read any of the books by J.K. Rowling: It's not that difficult to parse the Harry Potter universe. It's good vs. evil; the major players have magical powers; and now it's a fight to the finish.

The good guys are led by Harry Potter (Daniel Radcliffe), his best friend Ron Weasley (Rupert Grint), and his other best friend Hermione Granger (Emma Watson). Ron and Hermione are a couple; Harry has fallen for Ron's younger sister, but he ain't got time for that now.

He and his friends are searching for three lost magical objects, called Horcruxes, so they can complete a set of seven and thus have a hope of defeating the evil, mighty, powerful, and nose-less Lord Valdemort (Ralph Fiennes), who is determined to kill Harry Potter and subjugate the entire magical world to his wicked rule. (Horcuxes, nearly impossible to destroy, can be used to attain immortality.)

Lord Valdemort is aided in his quest for evil by Professor Snape (Alan Rickman), who killed the beloved Professor Dumbledore (Michael Gambon) at the end of Harry Potter and the Deathly Hallows Part 1 Half-Blood Prince.* The search for the Horcruxes becomes more frantic as Lord Valdemort gathers his forces for an attack upon Hogwart's, the school that Harry and his friends attended for the first six films. More important, it's a stronghold for the good forces in the universe.

The Harry Potter film series breaks neatly into two halves. The first two, directed by Chris Columbus, served as a warm-up. The third, directed by Alfonso Cuaron, marked the first turning point, as Michael Gambon replaced the sadly deceased Richard Harris as Professor Dumbledore and the series become more interesting, mainly because of Cuaron's direction. The fourth, directed by Mike Newell, probably had the liveliest action set-pieces (The Triwizard Tournament).

The fifth and succeeding films have all been directed by David Yates. He may be more of a journeyman than a visionary, but the consistency in tone benefits the series, especially since the story has turned further toward the darker side of magic, leading to a finale in which characters who have lived throughout the series meet their demise.

What has remained a constant in the incredible attention to detail -- you don't have to be a Potterhead to appreciate the niceties of elegant production design -- and the finely-crafted visual effects. This is a case where a higher budget pays off with top-notch work, so that the magical world on the page becomes reality on the screen. And because the series is so beloved by so many people, the series benefits by being able to tap a wonderful array of very good actors who are happy to play minor supporting roles, people like Helena Bonham Carter and Maggie Smith.

The film itself is well-made and effective, with action sequences that are easy enough to follow, and one dramatic flashback that is superbly, even elegantly, presented, almost as a summation of one character's life -- and by extension, the entire series.

While the Harry Potter series has never really been my personal cup of tea, I have begrudgingly come around to admiring its evident devotion to the source material, and, at the risk of repeating myself, the sheer craftsmanship on display. Harry Potter and the Deathly Hallows Part 2 is not the best film of the season, but any blockbuster that's willing to take on evil in a major way in the summer is a good thing in my book.

Harry Potter and the Deathly Hallows Part 2 opens wide throughout the known universe on Friday.

More about Harry Potter and the Deathly Hallows Part 2