LEGEND OF THE FIST: THE RETURN OF CHEN ZHEN Collector's Edition Blu-ray Review 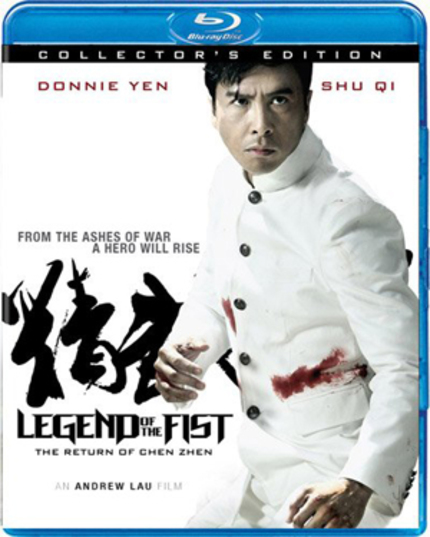 Presumed dead after single-handedly defeating all the Japanese fighters at the Hongkou Dojo to avenge his master, Chen Zhen (Donnie Yen) joins the Labour Corps during the First World War. Deciding to return home to defend his country, he arrives in Shanghai disguised as a wealthy businessman named Qi. He quickly befriends the notorious mafia boss Mr. Liu (Anthony Wong), owner of the nightclub Casablanca, and Kiki (Shu Qi), the club's star hostess. With the rapid expansion of Japanese influence in China, the military releases a death list, sending Shanghai into complete panic. As assassinations become rampant in the city, Chen disguises himself as the Masked Warrior to protect those who have been targeted.

I think it pretty much goes without question that Donnie Yen is the finest, most explosive, hardest working martial arts actor in Hong Kong today.  He performs admirably in several films every year, and in almost every case he is the absolute highlight of those films.  Over the last five years or so, he's also been on a remarkable hot streak.  SPL, Flashpoint, Seven Swords, Dragon Tiger Gate, and the Ip Man films have all been wonderful showpieces for him.  Does Legend of the Fist: The Return of Chen Zhen match up?  Let's see...

ScreenAnarchy's response to the film has been somewhat middling, although, most seem to agree that watching Yen kick ass is fun.  From Sitges, Guillem Rosset said:

There's no denying that Legend of the Fist has all the right ingredients to be the big blockbuster that aspires to be. It's a shame that not all the elements fit well together, an the film suffers as a whole. But if you're in for a couple of hours of entertainment where you can turn your brain off for a while and just enjoy, this is a sure bet.

For those not particularly familiar with the unique skills of Donnie Yen and the canon of Hong Kong action films which this aims to draw from, Legend of the Fist will likely be seen as a decent but middling action epic. But for those who understand the character, the concept and the vast potential of the concept this cannot go down as anything but an enormous disappointment.

The film is pretty entertaining if you are looking for a slick but simple action movie with terrific action sequences. Donnie Yen shows again that he is the man when dropping bodies. It's hard to imagine that the dude is pushing fifty and is still one of the fastest guys around. The predictable over the top melodrama is in place as well and it's all fine and dandy, something you'd come to expect in a film like this.

I think I come in somewhere in the middle.  The film's opening action set-piece in WWI Germany with Yen's Chen Zhen single-handedly dismantling what seems like the entire German army using only a knife, is a stunner, and should find a place in a Donnie Yen's Greatest Hits collection some day.  However, much of the rest of the film feels flat.  The most recent spate of Hong Kong and Chinese action films that (over)use nationalism as a way to market themselves to Chinese audiences have grown a bit stale.  In this case, rather than brutally pounding the snot out of the British, as in Fearless, True Legend, or Ip Man 2, Yen brutally pounds the snot out of the Japanese, as in Ip Man or Fist of Legend (which features Jet Li doing the same in another incarnation of Chen Zhen). It seems like the only place we can still find Chinese villains are in gangster movies, and even they are sexy.

Brushing away the nationalist stink of the film is something that I did to help myself enjoy it, and I must say it worked.  In Todd's review, he mentioned what seemed to him like Yen's aging and slowing down, I didn't notice that.  Donnie Yen seems to just as vital as he was in the early years of the 21st century.  The fact that he's nearing his self-imposed action film cutoff age of 46 doesn't seem to be slowing him down.  Beyond the WWI action sequence, there are at least half a dozen other impressive action sequences that make the film well worth watching.  In addition to those, we get the eye candy of Shu Qi, who spends a lot of time on screen, and the gravitas of Anthony Wong, who is a turd polisher of the highest order.

Was this the greatest Hong Kong action film ever?  No, not by any means.  However, it was a lot of fun.  If you're a Hong Kong action film fan, you know what you're in for, and you'll get it. Legend of the Fist delivers some serious butt kicking from the best in the business, and isn't that what we really want, anyway?

Despite whatever weaknesses Legend of the Fist may have as a film, as a Blu-ray disc, it has none.  Well Go USA have made this film look amazing. The image is fantastic, with a healthy field of grain when appropriate, crisp details in every shot, and color bursting from the screen.  I have been, and continue to be, impressed by Well Go's Blu-ray discs, and I'm glad they are giving these modern films the attention they require to look their best.  The audio is also really amazing.  Well Go has provided DTS-HD MA 5.1 tracks in both Mandarin and English.  The English track is as bad as they always are, but the Mandarin track is fantastic.  During the opening action sequence set in WWI, you can hear and even feel the war surrounding you with bullets flying all over the sound field.  The rest of the film is less flashy in terms of audio, but the dialogue and action are rendered very well throughout the film.

On this collector's edition, Well Go USA have provided a number of behind the scenes videos and interviews.  These all add up to around two hours of making of material.  There isn't a whole lot that is very in-depth, but watching them put this film together gave me an even greater appreciation for Yen and his physical abilities.  Some stunts that I would have thought were done with wires were not, and I found myself saying "wow" more than once.  Very cool stuff.  The interviews are typical EPK stuff, nothing terribly revelatory, but very interesting if you like to hear about that kind of stuff.  Also included are trailers for Legend of the Fist as well as trailers for the upcoming Well Go releases Little Big Soldier with Jackie Chan, and the DTV King of Fighters adaptation.

Overall, Well Go's Blu-ray presentation of Legend of the Fist: The Return of Chen Zhen is very impressive, and I can easily recommend it to HK action fans and fans of Donnie Yen.  Great disc!

Order Legend of the Fist: The Return of Chen Zhen Collector's Edition Blu-ray at Amazon