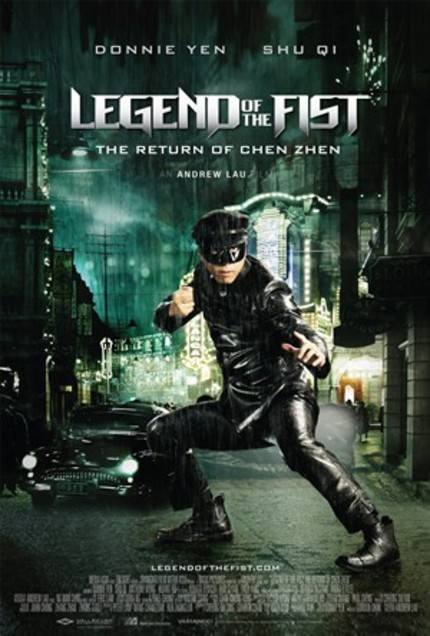 Andrew Lau's Legend Of The Fist: The Return Of Chen Zhen hits American screens on Friday and to help promote the US release WellGo USA have released a trio of clips to augment the US trailer for the picture.

In 1920s China, the nation is divided by infighting. Japan has become the most powerful force in Asia, taking over Northern Shanghai. With the city torn in half by international conflict, the popular nightclub "Casablanca" has become a hotbed of spies, mobsters, English officials and the Japanese military- all looking to gain control of the country, with little regard for what happens to its citizens.

Into this den of intrigue enters Chen Zhen (Donnie Yen), who has returned to China after fighting alongside the Allied forces in Europe, bringing some dark secrets from his past along with him. During the day, he's known as "Ku", and appears to be just another wealthy playboy. But at night, he takes to the street as a masked warrior, determined to subvert the Japanese invasion while becoming entangled with the sultry Kiki (Played by Shu Qi), who has a dangerous secret of her own. When his past catches up to him, Zhen is faced with near impossible odds- but his skills are formidable, and he's up to the challenge.

Combining the best of today's martial arts and superhero action with the classic spy thrillers of the past (and a healthy dollop of film noir on top), LEGEND OF THE FIST is the rare action film that truly gives the audience something they've never seen before.

Andrew Lau's Toronto and Venice selected Legend of the Fist takes the iconic character of Chen Zhen - previously played by both Bruce Lee and Jet Li - and re-imagines him as a masked hero fighting the Japanese presence in China. Throwing the reigning king of the martial arts world - Donnie Yen - into the lead role created impossibly high expectations for the film and while it is certainly uneven there are some definite high moments. And two of the biggest are included in the clips below. Yes, they've released the fabulous WWI assault sequence into the world. Check it out.