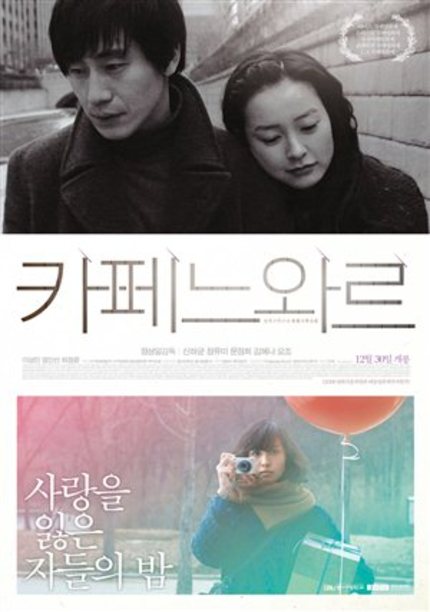 Cafe Noir is screening for free Tuesday, June 21 at 7:00 PM, as part of Korean Movie Night at Tribeca Cinemas. You can find more details and information on the Subway Cinema site.


Jeoung Sung-il, a well regarded Korean film critic, makes a directorial debut with Cafe Noir, largely based on two works of literature - Goethe's The Sorrows of Young Werther and Dostoevsky's White Nights. This sprawling three hours plus contemplation on love and heartbreak also draws from many different cinematic sources. This concoction doesn't always work, but is still quite intoxicating. And in Jeoung's hands, Seoul, the neon megalopolis, becomes the new capital of the heartbroken.


The film opens with a young woman unwrapping and eating a hamburger while looking up forlornly to the heavens in what appears to be an indoor mall. Tears roll down on her cheeks as we see her stuffing her face in real time. She is our Joan of Arc of the fastfood age, christening the film.


Young-soo (Shin Ha-gyun, Sympathy for Mr, Vengeance, Save the Green Planet), a music teacher, is first seen getting dumped by his lover- a mother of one of his pupils, on a Christmas eve. Not accepting the defeat, he devises a plan to off the obstacle (the woman's monstrous, Rilke quoting husband). When he fails to kill the husband of his lover, Young-soo realizes that for the happiness of the woman he loves, it is he who needs to be out of the picture.


For the second part of the film, Young-soo re-emerges, only to go through another crushing heartbreak. He meets a young woman on a bridge by chance (showcasing the brightly restored Chung-gye creek which runs through the heart of Seoul). She begs him not to fall in love with her, but to be a confidant and proceeds to tell him a sob story in one long take- she has been waiting for her lover on the bridge for a year. They made a promise to meet after a year if they still love each other. Tonight might be the night, or tomorrow night, or the night after.... Her lover is obviously not coming, and our melancholic hero can't help falling for this delusional, yet vibrant, lovesick woman.


With its deliberate episodic pacing, arduous monologues, forever tracking shots, mix of B&W/color photography, a lot of intriguing supporting characters and a lot of film references (from The Red Balloon to The Band of Outsiders' dancing sequence to jabbing at recent Korean movie hits- Old Boy and The Host), Cafe Noir is a truly astounding cinematic examination of unrequited love.


With everything mapped out to a tee, Jeoung's style is quite the opposite of Wong Kar-wai. But it wouldn't be a stretch to regard him from now on as Wong's cerebral brother.


Dustin Chang is a freelance writer. His musings and opinions of the world can be found at www.dustinchang.com