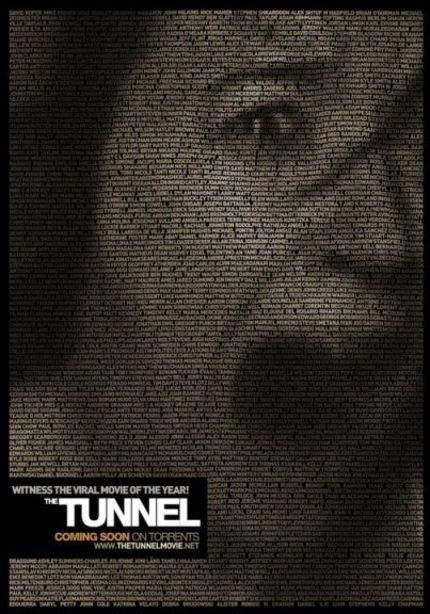 [Our thanks to Brandon Tenold for the following review.]

An Australian entry into the "found footage" genre of horror movies like The Blair Witch Project, Paranormal Activity and [REC], The Tunnel has mostly gotten press so far for its distribution model - with producers raising money by encouraging people to buy a frame of the movie for $1 and releasing it for free on torrent sites, in addition to having a physical DVD release - rather than it's actual content.  Make no mistake though, although the way it's been marketed and distributed is clever, the movie itself has some tricks up its sleeve too, even if it is a bit derivative of the films mentioned above.

The story goes like this: In order to combat the city's water shortage problem, government officials planned to use the vast collection of abandoned railway tunnels below Sydney to build a water recycling facility, even though this would disrupt the population of homeless who supposedly live down there.  Suddenly, the project is dropped and there are rumors of homeless people disappearing in the tunnels, even though the government continues to deny that there even are homeless people down there.  Investigative journalist Natasha Warner (Bel Delia) decides to go into the tunnels herself to find out what's really going on, but when she's unable to get a permit, she sneaks in along with fellow journalist Peter (Andy Rodoreda), cameraman Steve (Steve Davis) and soundman 'Tangles' (Luke Arnold).  They soon discover that there IS something down there, but it may or may not be human.  What's worse, it's dark in those old tunnels, and they're running out of light...

While that's a more convoluted set up than your usual "teenagers go into the woods and bad shit happens to them" horror movie premise, it still serves the purpose of getting the characters into a claustrophobic setting and trapping them with something horrible.  What sets The Tunnel apart from other "found footage" movies is that while most of those films present themselves as being composed of raw (that is, uncut and unedited) footage, The Tunnel is presented as a full on completed documentary, with slick opening and closing credits sequences and various "talking heads" interviews spliced in throughout.  It also takes footage from sources other than the protagonist's cameras, such as closed circuit television shots at various locations.  This is an interesting approach, but it has the effect of lessening the suspense a bit, since we basically know from the fact that they're being interviewed who's going to survive.  Nevertheless, the movie does manage some scares and the underground tunnels are an effectively creepy setting.

The movie takes its time to get going, with the scary stuff only really starting at about the halfway point, the first half being mostly spent on setting up the story and getting to know the characters, much like how [REC] lured it's audience into a lull before cranking up the scares.  In fact this movie owes quite a bit to [REC].  I certainly wouldn't call it a rip-off, but when there's a scene shot in night vision mode of Delia trying to keep quiet so the spindly creature doesn't hear her, all while she's wearing a dirty white tank top, it's hard not to think of a certain Spanish horror movie.

With regards to the creature itself, The Tunnel is somewhere between Blair Witch style ambiguity and something like, say, Trollhunter which clearly and frequently shows you the monsters.  Whatever is stalking them is obviously something more than just a pissed off homeless man, but the audience never really gets a clear look at it, only quick flashes and murky dark shots.  Given the movie's budget limitations, this was probably a wise choice, and what they do show is mostly effective.  Another strong point is the acting, with the main characters all seeming very natural, both in the "documentary" footage and interviews, Steve Davis' especially being the standout.

While The Tunnel would likely have not gotten as much publicity without its free torrent release, it's still a solid entry into the "found footage" genre, and if you're a fan of these types of movies, check it out.  After all, whether you like it or not, it's one movie you won't feel guilty about downloading.

More about The Tunnel