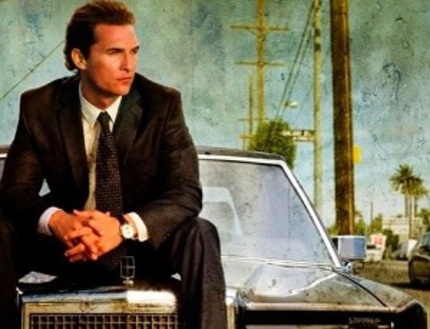 Mick Haller (Matthew McConaughey) is not your average lawyer. He cruises the streets of Beverley Hills in his mobile office; a sleek and stylish Lincoln and is accompanied by his feel-good chauffeur Earl (Laurence Mason). Things, however quickly start to unravel out of Mick's charismatic control when he takes on a wealthy new client Louis (Ryan Philippe).

Grand legal auto; damn this film is smooth. It makes me want to go out and order some type of spirit, neat of course. The pacing initially plays out like a procedural but with a definite twist that leads into film territory and makes it anything but your generic evening crime drama. It is tightly wound and controlled by director Brad Furman to the point that there never seems to be a dull moment.

The tone is that of a 70-80's pastiche and the film effects, music and cinematography make this apparent. This is feel good cinema; cruising along and interesting but not overly complex. The Lincoln Lawyer is definitely a recommended watch for a chilled out night. It screams old school, the Lincoln itself symbolizes the old cool and the film retains an urban feel hopping from bar to apartment and the various beautiful sights in Beverley Hills.

The cinematography is gorgeous and sets the mood. There are quite a few good tracking shots that keep each scene brisk but denote their importance. Mick shoots and sips countless amounts of spirits and this can be felt in the film in short, whiskey infused cinema. The color palette is liquid brown and changes to something more dynamic when called for.

The Lincoln Lawyer even uses Rashomon-styled flashbacks, presenting the same scene more than once, but from another point of view. This keeps the mystery fresh and there is always an air of tension and suspicion until Mick justifies his conclusions.

Regardless of how the film presents itself, by far its most interesting feature is the on-screen adaptation from the book, and in particular translating the morally grey ethics which McConaughey purveys effortlessly as the cock-sure super sleuth. He is a hustler that double plays the system and his clients, harmlessly but not without foul, to end up on top. He has many inside deals with varying arms of the law, and his investigator Frank Levin (William H. Macy, always excellent) only adds to his questionable asides. He spills out legal slang while exploiting the intricacies of the system, all the while a Cheshire grin on his face. The only thing he seems to take fewer candors in is his ex-wife Maggie (Marisa Tomei) and their daughter.

Other than Mick's essential antics the film also gets most of its entertainment from the additional cast; dodgy witnesses, annoyed policemen and straight-talking bikers that respond and gel with Mick's snarky wit. The client Louis and his rich family do everything they can to elude Mick and appear as shut a book as possible and Ryan Philippe works the best he can with his character but sometimes grates.

The Lincoln Lawyer has entertainment in spades, from its mysterious plot, comedic, smart dialogue and even a few quick action sequences. Sure its characters are not fleshed out; placing the viewer in Mick Haller's shoes at a random interval in his life, but this does not matter. The film does more than enough with the source material. The Lincoln Lawyer is a feel good, cool film that provides a lot of fun and a supremely original twist on what it is to be a lawyer. 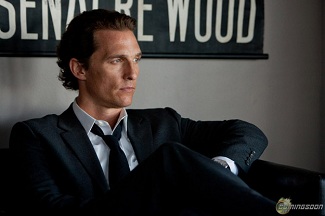 More about The Lincoln Lawyer